Alkanes are saturated hydrocarbons. Methane , is the first member of alkane family.

Alkanes are saturated hydrocarbons represented by the general formula CnH2n+2 where ‘n’ is the number of carbon atoms in the molecule. Methane CH4, is the first member of alkane family. The successive members are ethane C2H6, propane C3H8,butane C4H10, pentane C5H12 and so on. It is evident that each member differs from its proceeding or succeeding member by a –CH2 group.

We have already discussed the nomenclature of organic compound in Unit:11. Let us understand the nomenclature and isomerism in few examples. The first three members methane CH4, ethane C2H6 and propane C3H8 have only one structure.

However, higher members can have more than one structure leading to constitutional isomers (differ in connectivity) or structural isomers. For example, an alkane with molecular formula C4H10 can have two structures. They are n-butane and iso-butane. In n-butane, all the four carbon atoms are arranged in a continuous chain. The ‘n’ in n-butane stand for ‘normal’ and means that the carbon chain is unbranched. The second isomer iso-butane has a branched carbon chain. The word iso indicates it is an isomer of butane. 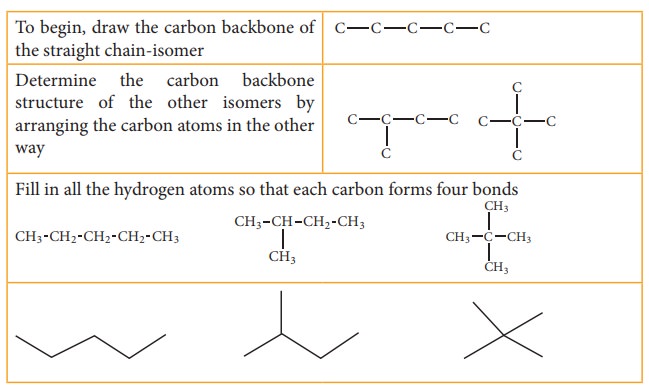 IUPAC name for some branched alkanes

Let us write the IUPAC name for the below mentioned alkanes by applying the general rules of nomenclature that we already discussed in unit No.11 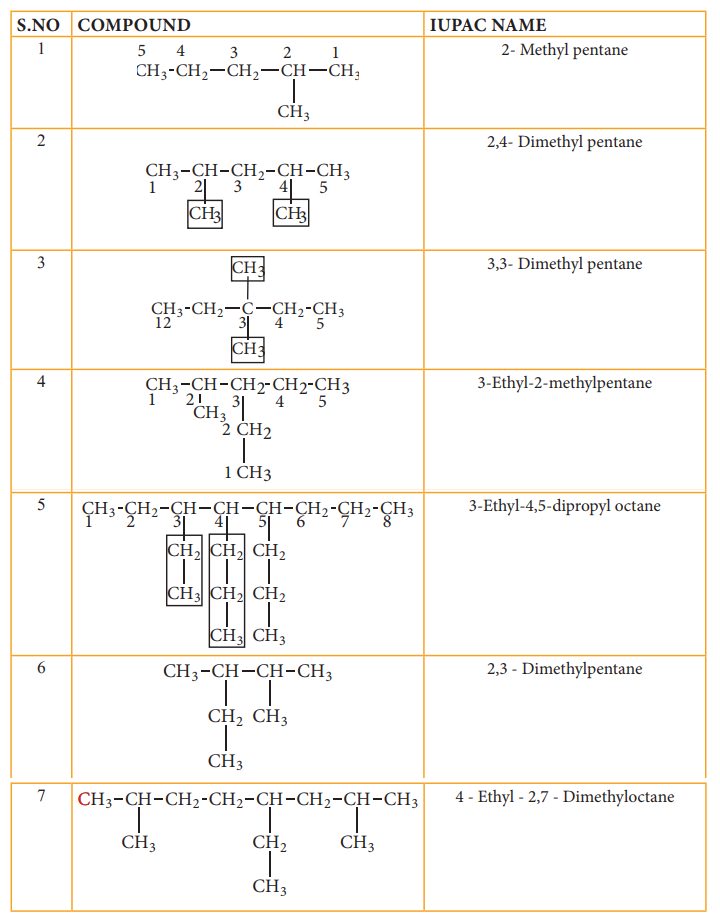 How to draw structural formula for given IUPAC name :

After you learn the rules for naming alkanes, it is relatively easy to reverse the procedure and translate the name of an alkane into a structural formula. The example below show how this is done.

Let us draw the structural formula for

Step: 1The parent hydrocarbon is pentane. Draw the chain of five carbon atoms and number it.

Step: 3 Add hydrogen atoms to the carbon skeleton so that each carbon atoms has four bonds 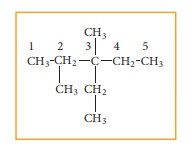 Alkanes are not laboratory curiosities but they are extremely important naturally occurring compounds. Natural gas and petroleum (crude oil) are the most important natural sources. However, it can be prepared by the following methods.

1. Preparation of alkanes from cata-lytic reduction of unsaturated hydro-carbons.

When a mixture hydrogen gas with alkene or alkyne gas is passed over a catalysts such as platinum or palladium at room temperature, an alkane is produced. This process of addition of H2 to unsaturated compounds is known as hydrogenationThe above process can be catalysed by nickel at 298K. This reaction is known as Sabatier-Sendersens reaction 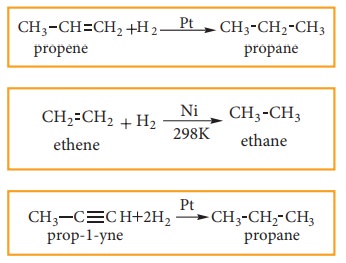 2. Preparation of alkanes from carboxylic acids:

i) Decarboxylation of sodium salt of carboxylic acid

When a mixture of sodium salt of carboxylic acid and soda lime (sodium hydroxide + calcium oxide) is heated, alkane is formed. The alkane formed has one carbon atom less than carboxylic acid. This process of eliminating carboxylic group is known as decarboxylation.

When sodium or potassium salt of carboxylic acid is electrolyzed, a higher alkane is formed. The decarboxylative dimerization of two carboxylic acid occurs. This method is suitable for preparing symmetrical alkanes(R-R).

i) By reduction with nascent hydrogen

Except alkyl fluorides, other alkyl halides can be converted to alkanes by reduction with nascent hydrogen. The hydrogen for reduction may be obtained by using any of the following reducing agents: Zn+HCl, Zn+CH3COOH, Zn-Cu couple in ethanol, LiAlH4 etc.,

When a solution of halo alkanes in dry ether is treated with sodium metal, higher alkanes are produced. This reaction is used to prepare higher alkanes with even number of carbon atoms.

An alkyl halide and lithium di alkyl cuprate are reacted to give higher alkane.

4) Preparation of Alkanes from Gri-gnard reagents

Halo alkanes reacts with magnesium in the presence of dry ethers to give alkyl magnesium halide which is known as Grignard reagents. Here the alkyl group is directly attached to the magnesium metal make it to behave as carbanion. So, any compound with easily replaceable hydrogen reacts with Grignard reagent to give corresponding alkanes. 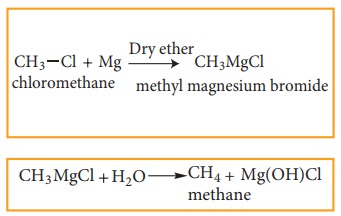 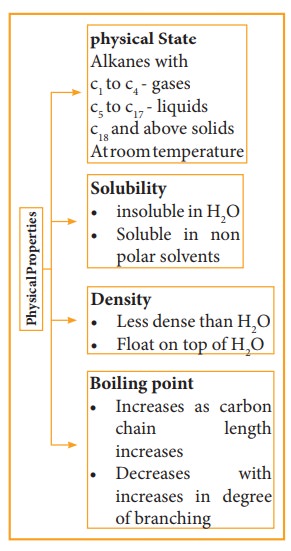 Water molecules are polar and alkanes are non-polar. The insolubility of alkanes in water makes them good water repellent for metals which protects the metal surface from corrosion. Because of their lower density than water, they form two layers and occupy top layer. The density difference between alkanes and water explains why oil spills in aqueous environment spread so quickly.

Each carbon in alkanes is sp3 hybridized and the four groups or atoms around the carbon are tetrahedrally bonded. In alkanes having two or more carbons, there exists free rotation about C-C single bond. Such rotation leaves all the groups or atoms bonded to each carbon into an infinite number of readily interconvertible three dimensional arrangements. Such readily interconvertible three dimensional arrangement of a molecule is called conformations.

(i) Conformations of ethane: 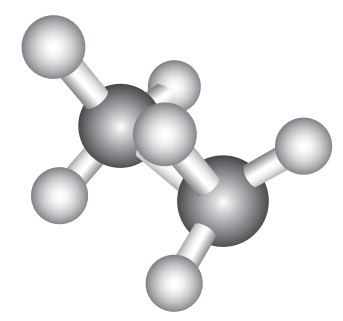 In this conformation, the hydrogen’s of one carbon are directly behind those of the other. The repulsion between the atoms is maximum and it is the least stable conformer. 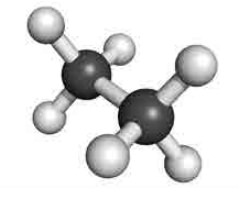 In this conformation, the hydrogens of both the carbon atoms are far apart from each other. The repulsion between the atoms is minimum and it is the most stable conformer.

The stabilities of various conformations of ethane are

The potential energy difference between the staggered and eclipsed conformation of ethane is around 12.5 KJmol-1. The various conformations can be represented by new man projection formula.

n-Butane may be considered as a derivative of ethane, as one hydrogen on each carbon is replaced by a methyl group

In this conformation, the distance between the two methyl group is minimum. So there is maximum repulsion between them and it is the least stable conformer.

In this conformation, the distance between the two methyl groups is maximum and so there is minimum repulsion between them. And it is the most stable conformer. 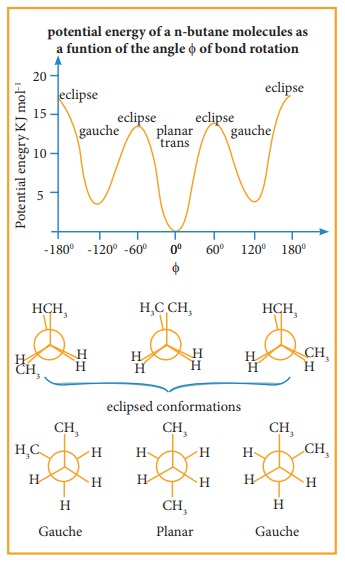 Paraffin is the older name for the alkane group family of compounds. This name comes from the Latin which means ‘little activity’

A combustion reaction is a chemical reaction between a substances and oxygen with evolution of heat and light (usually as a flame). In the presence of sufficient oxygen, alkanes undergoes combustion when ignited and produces carbondioxide and water.

The combustion reaction is expressed as follows

When alkanes burn in insufficient supply of oxygen, they form carbonmonoxide and carbon black.

Ahalogenation reaction is the chemical reaction between an alkane and halogen in which one or more hydrogen atoms are substituted by the halogens.

Chlorination and Bromination are two widely used halogenation reactions. Fluorination is too quick and iodination is too slow. Methane reacts with chlorine in the presence of light or when heated as follows. 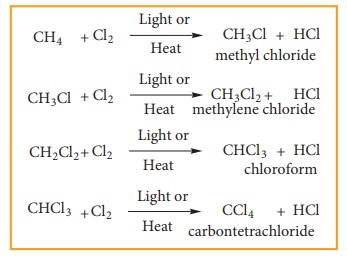 The reaction proceeds through the free radical chain mechanism. This mechanism is characterized by three steps initiation, propagation and termination.

i) CHAIN INITITATION: The chain is initiated by UV light leading to homolytic fission of chlorine molecules into free radicals (chlorine atoms).

Here we choose Cl-Cl bond for fission because C-C & C-H bonds are stronger than Cl-Cl.

ii) PROPAGATION: It proceeds as follows,

b) The methyl free radical thus obtained attacks the second molecule of chlorine to give chloromethane (CH3Cl) and a chlorine free radical as follows.

c) This chlorine free radical then cycles back to step (a) and both step (a) and (b) are repeated many times and thus chain of reaction is set up.

After sometimes, the reactions stops due to consumption of reactant and the chain is terminated by the combination of free radicals. 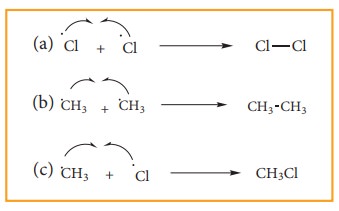 Alkanes with six to ten carbon atoms are converted into homologous of benzene at high temperature and in the presence of catalyst. This process is known as aromatization. It occurs by simultaneous cyclisation followed by dehydrogenation of alkanes.

Methane reacts with steam at 1273K in the presence of Nickel and decomposes to form carbon monoxide and hydrogen gas.

Pyrolysis is defined as the thermal decomposition of organic compound into smaller fragments in the absence of air through the application of heat. ‘Pyro’ means ‘fire’ and ‘lysis’ means ‘separating’. Pyrolysis of alkanes also named as cracking.

In the absence of air, when alkane vapours are passed through red-hot metal it breaks down into simpler hydrocarbons.

The products depends upon the nature of alkane, temperature, pressure and presence or absence of catalyst. The ease of cracking in alkanes increases with increase in molecular weight and branching in alkanes. Cracking plays an important role in petroleum industry.

Isomerisation is a chemical process by which a compound is transformed into any its isomeric forms. Normal alkanes can be converted into branched alkanes in the presence of AlCl3 and HCl at 298 k.

This process is of great industrial importance. The quality of gasoline is improved by isomerising its components.

The exothermic nature of alkane combustion reaction explains the extensive use of alkanes as fuels. Methane present in natural gas is used in home heating. Mixture of propane and butane are known as LPG gas which is used for domestic cooking purpose. GASOLINE is a complex mixture of many hydrocarbons used as a fuel for internal- combustion engines.

Carbon black is used in the manufacture of ink, printer ink and black pigments. It is also used as fillers. 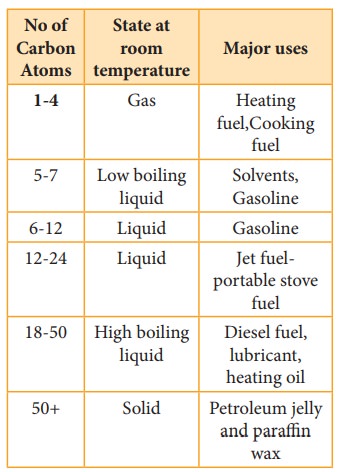