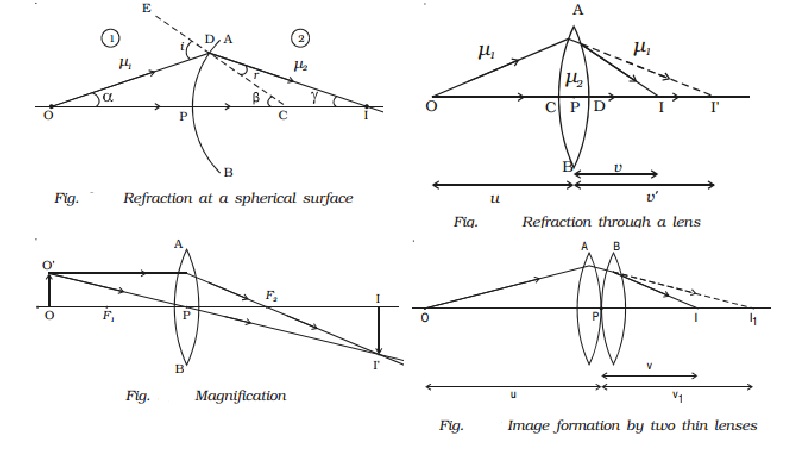 (i) The incident light is assumed to be monochromatic and

2 Refraction at a spherical surface

Let us consider a portion of a spherical surface AB separating two media having refracting indices ?1 and ?2 (Fig. ). This is symmetrical about an axis passing through the centre C and cuts the surface at P. 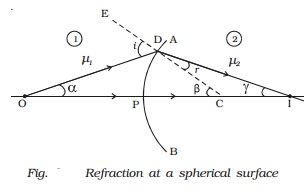 Consider a point object O on the axis in the first medium. Consider two rays OP and OD originating from O. The ray OP falls normally on AB and goes into the second medium, undeviated. The ray OD falls at D very close to P. After refraction, it meets at the point I on the axis, where the image is formed. CE is the normal drawn to the point D. Let i and r be the angle of incidence and refraction respectively.

Since D is close to P, the angles α, β and γ are all small. From the Fig.

Substituting the values of α, β and γ in equation (4)

As the incident ray comes from left to right, we choose this direction as the positive direction of the axis. Therefore u is negative, whereas v and R are positive substitute PO = ?u PI = +v and PC = +R in equation (5),

Equation (6) represents the general equation for refraction at a spherical surface.

If the first medium is air and the second medium is of refractive index ?, then

A lens is one of the most familiar optical devices. A lens is made of a transparent material bounded by two spherical surfaces. If the distance between the surfaces of a lens is very small, then it is a thin lens. 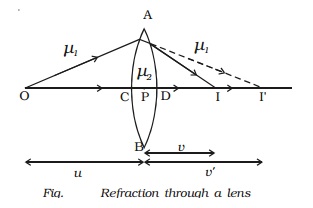 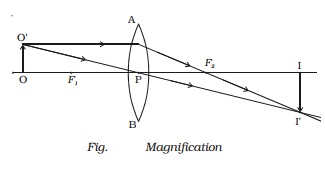 This equation is valid for both convex and concave lenses and for real and virtual images.

6 Power of a lens 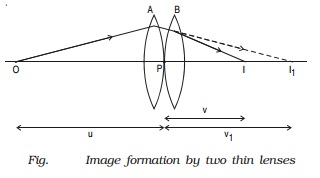