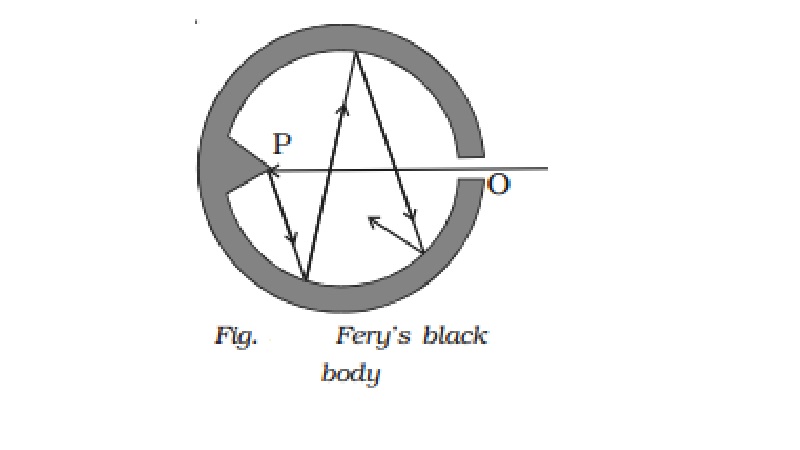 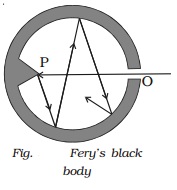 Fery?s black body consists of a double walled hollow sphere having a small opening O on one side and a conical projection P just opposite to it (Fig.). Its inner surface is coated with lamp black. Any radiation entering the body through the opening O suffers multiple reflections at its innerwall and about 97% of it is absorbed by lamp black at each reflection. Therefore, after a few reflections almost entire radiation is absorbed. The projection helps in avoiding any direct reflections which even otherwise is not possible because of the small opening O. When this body is placed in a bath at fixed temperature, the heat radiations come out of the hole. The opening O thus acts as a black body radiator.

Similarly a body at a lower temperature receives more heat energy than it loses to the surroundings. That is why we feel cold when we stand before an ice block.

A body will stop emitting radiation only when it is at absolute zero. (i.e) 0 K or ?273o C. At this temperature the kinetic energy of the molecule is zero.

Therefore, Prevost theory states that all bodies emit thermal radiation at all temperatures above absolute zero, irrespective of the nature of the surroundings.

From the above equation it is evident that if aλ is large, then eλ will also be large (i.e) if a body absorbs radiation of certain wavelength strongly then it will also strongly emit the radiation of same wavelength. In other words, good absorbers of heat are good emitters also.

continuous spectrum is absorbed at two places corresponding to the wavelengths of D1 and D2 lines and appear as dark lines. This is in accordance with Kirchoff?s law.

Wien?s displacement law states that the wavelength of the radiation corresponding to the maximum energy (λm) decreases as the temperature T of the body increases.

Stefan?s law states that the total amount of heat energy radiated per second per unit area of a perfect black body is directly proportional to the fourth power of its absolute temperature.

It is also called Stefan - Boltzmann law, as Boltzmann gave a theoretical proof of the result given by Stefan.

Newton?s law of cooling states that the rate of cooling of a body is directly proportional to the temperature difference between the body and the surroundings.

The law holds good only for a small difference of temperature. Loss of heat by radiation depends on the nature of the surface and the area of the exposed surface.