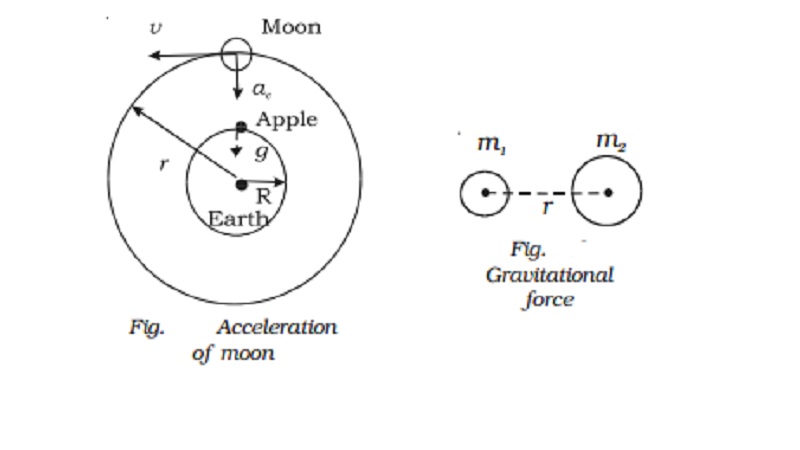 The motion of the planets, the moon and the Sun was the interesting subject among the students of Trinity college at Cambridge in England. Newton was also one among these students.

The motion of the planets, the moon and the Sun was the interesting subject among the students of Trinity college at Cambridge in England.

Newton  was  also  one  among  these students. In 1665, the college was closed for an indefinite period due to plague. Newton, who was        then   23      years old, went     home to Lincolnshire. He continued to think about the motion of planets and the moon. One day Newton sat under an apple tree and had tea with his friends. He saw an apple falling to ground. This incident made him to think about falling bodies. He concluded that the same force of gravitation which attracts the apple to the Earth might also be responsible for attracting the moon and keeping it in its orbit. The centripetal acceleration of the moon in its orbit and the downward acceleration of a body falling on the Earth might have the same origin. Newton calculated the centripetal acceleration by assuming moon's orbit (Fig.) to be circular. 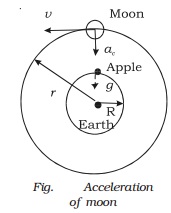 Time period of revolution of the moon around the Earth,

Newton assumed that both the moon and the apple are accelerated towards the centre of the Earth. But their motions differ, because, the moon has a tangential velocity whereas the apple does not have.

The value of ac was calculated as follows :

Newton suggested that gravitational force might vary inversely as the square of the distance between the bodies. He realised that this force of attraction was a case of universal attraction between any two bodies present anywhere in the universe and proposed universal gravitational law.

Consider two bodies of masses m1 and m2 with their centres separated by a distance r. The gravitational force between them is

where G is the universal gravitational constant.

Special features of the law

The gravitational force between two bodies is an action and reaction pair.