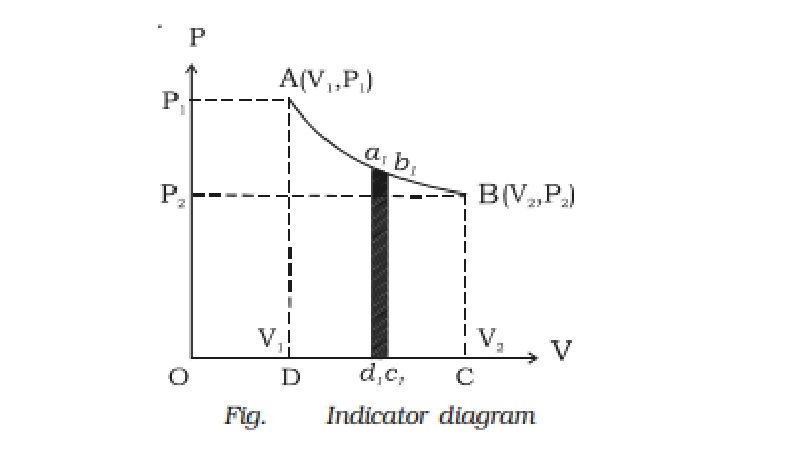 Let us consider one mole of an ideal gas enclosed in a cylinder fitted with a perfectly frictionless piston. Let P1, V1 and T be the initial state of the gas. If dV is an infinitesimally small increase in volume of the gas during which the pressure P is assumed to be constant, then small amount of workdone by the gas is dW = PdV 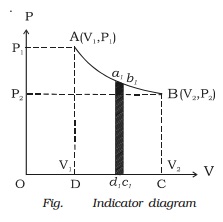 Hence, in an indicator diagram the area under the curve represents the work done (Fig.).

When a gas undergoes expansion or compression at constant temperature, the process is called isothermal process.

Let us consider a gas in a cylinder provided with a frictionless piston. The cylinder and the piston are made up of conducting material. If the piston is pushed down slowly, the heat energy produced will be quickly transmitted to the surroundings. Hence, the temperature remains constant but the pressure of the gas increases and its volume decreases.

The equation for an isothermal process is PV = constant. 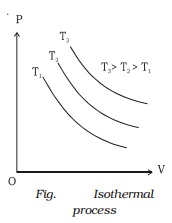 If a graph is drawn between P and V, keeping temperature constant, we get a curve called an isothermal curve. Isotherms for three different temperatures T1, T2 and T3 are shown in the Fig.. The curve moves away from the origin at higher temperatures.

During an isothermal change, the specific heat capacity of the gas is infinite.

(e.g) Melting of ice at its melting point and vapourisation of water at its boiling point.

Workdone in an isothermal expansion

Consider one mole of an ideal gas enclosed in a cylinder with perfectly conducting walls and fitted with a perfectly frictionless and conducting piston. Let P1, V1 and T be the initial pressure, volume and temperature of the gas. Let the gas expand to a volume V2 when pressure reduces to P2, at constant temperature T. At any instant during expansion let the pressure of the gas be P. If A is the area of cross section of the piston, then force F = P ? A.

Let us assume that the pressure of the gas remains constant during an infinitesimally small outward displacement dx of the piston. Work done

This is the equation for the workdone during an isothermal process.

In Greek, adiabatic means ?nothing passes through?. The process in which pressure, volume and temperature of a system change in such a manner that during the change no heat enters or leaves the system is called adiabatic process. Thus in adiabatic process, the total heat of the system remains constant.

Let us consider a gas in a perfectly thermally insulated cylinder fitted with a piston. If the gas is compressed suddenly by moving the piston downward, heat is produced and hence the temperature of the gas will increase. Such a process is adiabatic compression.

Both the compression and expansion should be sudden, so that there is no time for the exchange of heat. Hence, in an adiabatic process always there is change in temperature.

Expansion of steam in the cylinder of a steam engine, expansion of hot gases in internal combustion engine, bursting of a cycle tube or car tube, propagation of sound waves in a gas are adiabatic processes.

The adiabatic relation between P and V for a gas, is

substituting the value P in (1)

In an adiabatic process Q =constant

Work done in an adiabatic expansion

Let P1, V1 and T1 be the initial pressure, volume and temperature of the gas. If A is the area of cross section of the piston, then force exerted by the gas on the piston is

Substituting the value of k in (1)

If T2 is the final temperature of the gas in adiabatic expansion, then

This is the equation for the work done during adiabatic process.