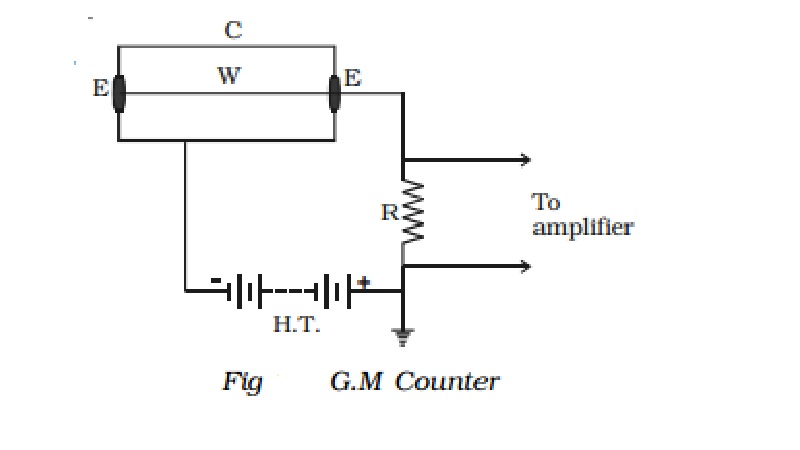 The G.M tube consists of E a metal tube with glass envelope (C) acting as the cathode and a fine tungsten wire (W) along the axis of the tube, which acts as anode (Fig ). The tube is well insulated from the anode wire. 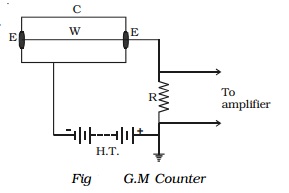 The tube is filled with an inert gas like argon at a low pressure. One end is fitted with a thin mica sheet and this end acts as a window through which radiations enter the tube. A high potential difference of about 1000 V is applied between the electrodes through a high resistance R of about 100 mega ohm.

When an ionising radiation enters the counter, primary ionisation takes place and a few ions are produced. These ions are accelerated with greater energy due to the high potential difference and they cause further ionisation and these ions are multiplied by further collisions. Thus an avalanche of electrons is produced in a short interval of time. This avalanche of electrons on reaching the anode generates a current pulse, which when passing through R develops a potential difference. This is amplified by electronic circuits and is used to operate an electronic counter. The counts in the counter is directly proportional to the intensity of the ionising radiation.

The ionisation of the gas is independent of the type of the incident radiation. Hence, G.M. counter does not distinguish the type of radiation that enters the chamber.

Wilson's cloud chamber is another type of particle detector. This was the first instrument to record the visual observation of the tracks of the charged particles, when they pass through matter.