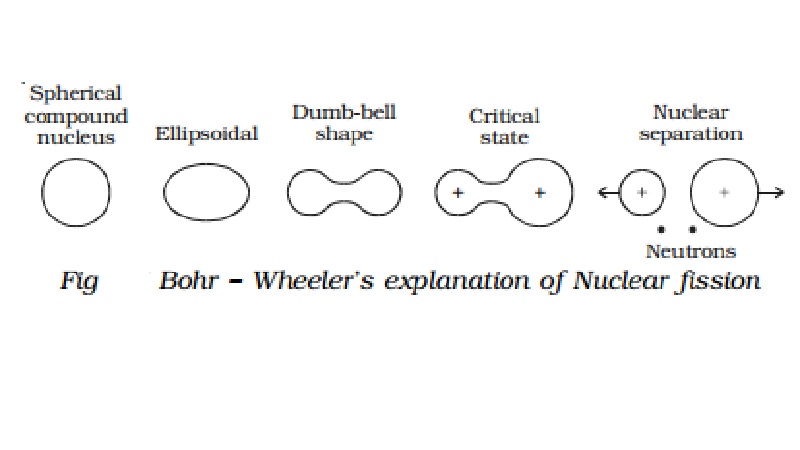 In 1939, German scientists Otto Hahn and F. Strassman discovered that when uranium nucleus is bombarded with a neutron, it breaks up into two fragments of comparable masses with the release of energy.

In 1939, German scientists Otto Hahn and F. Strassman discovered that when uranium nucleus is bombarded with a neutron, it breaks up into two fragments of comparable masses with the release of energy.

The process of breaking up of the nucleus of a heavier atom into two fragments with the release of large amount of energy is called nuclear fission. The fission is accompanied of the release of neutrons. The fission reactions with 92U235 are represented as

In the above examples the fission reaction is taking place with the release of 3 neutrons and 2 neutrons. On an average 2.5 neutrons per fission are actually released. Of the many possible fission reactions of 92U235, the reaction given in equation (1) is the most favourable.

Let  us  calculate  the  amount  of  energy  released  during  the  fission of 92U235 with a neutron. The fission reaction is

Niels Bohr and John A. Wheeler explained the nuclear fission process with the help of liquid drop model. A liquid drop has a spherical shape due to surface tension. On applying external force the sphere changes into ellipsoid, which may change into a dumb bell shape when the force is larger. This may break at the narrow end into two portions.

In the same way, when the heavier nucleus absorbs a neutron, a compound nucleus is formed and is left in an excited state. The excitation energy sets up a series of rapid oscillations. The compound nucleus undergoes distortion from spherical to dumb bell shape. Each portion of the dumb bell has a positive charge and one repels the other. This results in fission and the formation of fission fragments (Fig).