When an external force is applied on a body, which is not free to move, there will be a relative displacement of the particles. Due to the property of elasticity, the particles tend to regain their original position.

When an external force is applied on a body, which is not free to move, there will be a relative displacement of the particles. Due to the property of elasticity, the particles tend to regain their original position. The external forces may produce change in length, volume and shape of the body. This external force which produces these changes in the body is called deforming force. A body which experiences such a force is called deformed body. When the deforming force is removed, the body regains its original state due to the force developed within the body. This force is called restoring force. The property of a material to regain its original state when the deforming force is removed is called elasticity. The bodies which possess this property are called elastic bodies. Bodies which do not exhibit the property of elasticity are called plastic. The study of mechanical properties helps us to select the material for specific purposes. For example, springs are made of steel because steel is highly elastic.

Its dimensional formula is ML-1T-2.

Due to the application of deforming force, length, volume or shape of a body changes. Or in other words, the body is said to be strained. Thus, strain produced in a body is defined as the ratio of change in dimension of a body to the original dimension.

Strain is the ratio of two similar quantities. Therefore it has no unit.

If an elastic material is stretched or compressed beyond a certain limit, it will not regain its original state and will remain deformed. The limit beyond which permanent deformation occurs is called the elastic limit.

English Physicist Robert Hooke (1635 - 1703) in the year 1676 put forward the relation between the extension produced in a wire and the restoring force developed in it. The law formulated on the basis of this study is known as Hooke's law. According to Hooke's law, within the elastic limit, strain produced in a body is directly proportional to the stress that produces it. 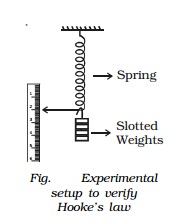 Stress / Strain = a constant, known as modulus of elasticity.

A spring is suspended from a rigid support as shown in the Fig.. A weight hanger and a light pointer is attached at its lower end such that the pointer can slide over a scale graduated in millimeters. The initial reading on the scale is noted. A slotted weight of m kg is added to the weight hanger and the pointer position is noted. The same procedure is repeated with every additional m kg weight. It will be observed that the extension of the spring is proportional to the weight. This verifies Hooke's law.