Classification of nuclei and Properties of nucleus Nuclear size

The nucleus consists of the elementary particles, protons and neutrons which are known as nucleons. A proton has positive charge of the same magnitude as that of electron and its rest mass is about 1836 times the mass of an electron.

The atomic nucleus was discovered by Earnest Rutherford in 1911. Rutherford's experiment on scattering of alpha particles proved that the mass of the atom and the positive charge is concentrated in a very small central core called nucleus. The dimension of nucleus is much smaller than the overall dimension of the atom. The nucleus is surrounded by orbiting electrons.

The nucleus consists of the elementary particles, protons and neutrons which are known as nucleons. A proton has positive charge of the same magnitude as that of electron and its rest mass is about 1836 times the mass of an electron. A neutron is electrically neutral, whose mass is almost equal to the mass of the proton. The nucleons inside the nucleus are held together by strong attractive forces called nuclear forces.

Isotopes are atoms of the same element having the same atomic number Z but different mass number A. The nuclei 1H 1, 1H2 and 1H3 are the isotopes of hydrogen. In other words isotopes of an element contain the same number of protons but different number of neutrons. As the atoms of isotopes have identical electronic structure, they have identical chemical properties and placed in the same location in the periodic table.

Isotones are atoms of different elements having the same number of neutrons. 6C14 and 8O16 are some examples of isotones.

According to Rutherford's á−particle scattering experiment, the distance of the closest approach of á − particle to the nucleus was taken as a measure of nuclear radius, which is approximately 10−15m. If the nucleus is assumed to be spherical, an empirical relation is found to hold good between the radius of the nucleus R and its mass number A. It is given by

The nuclear density ńN can be calculated from the mass and size of the nucleus.

where, A = mass number

Substituting the known values, the nuclear density is calculated as 1.816 × 1017 kg m−3 which is almost a constant for all the nuclei irrespective of its size.

The high value of the nuclear density shows that the nuclear matter is in an extremely compressed state.

The charge of a nucleus is due to the protons present in it. Each proton has a positive charge equal to 1.6 × 10−19 C.

The nuclear charge = Ze, where Z is the atomic number.

This is equal to the difference in mass of the hydrogen atom which is 1.007825 amu and the mass of electron.

One electron-volt (eV) is defined as the energy of an electron when it is accelerated through a potential difference of 1 volt.

where mp and mn are the mass of a proton and a neutron respectively. However, from the measurement of mass by mass spectrometers, it is found that the mass of a stable nucleus (m) is less than the total mass of the nucleons.

where ∆m is the mass defect

where mH represents the mass of one hydrogen atom

When the protons and neutrons combine to form a nucleus, the mass that disappears (mass defect, ∆m) is converted into an equivalent amount of energy (∆mc2). This energy is called the binding energy of the nucleus.

The binding energy per nucleon is

BE/ A = Binding energy of the nucleus  / Total number of nucleons 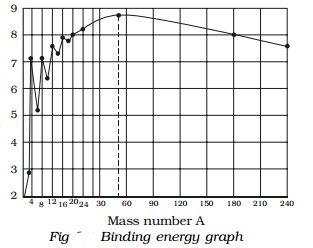 i.            The binding energy per nucleon increases sharply with mass number A upto 20. It increases slowly after A = 20. For A<20, there exists recurrence of peaks corresponding to those nuclei, whose mass numbers are multiples of four and they contain not only equal but also even number of protons and neutrons. Example: 2He4, 4Be8, 6C12, 8O16, and 10Ne20. The curve becomes almost flat for mass number between 40 and 120. Beyond 120, it decreases slowly as A increases.

iii.            The average binding energy per nucleon is about 8.5 MeV for nuclei having mass number ranging between 40 and 120. These elements are comparatively more stable and non radioactive.

iv.            For higher mass numbers the curve drops slowly and the BE/A is about 7.6 MeV for uranium. Hence, they are unstable and radioactive.