A 37-year-old woman attends the antenatal clinic at 18 weeks’ gestation. She is gravida 2 para 1, having had a spontaneous vaginal delivery at term 8 years ago. This current pregnancy was achieved through in vitro fertilization after four attempts (cycles). Two embryos were implanted. The first-trimester scan confirmed a twin gestation and noted a lambda sign between the gestations sacs. The anomaly scan is due in 2 weeks.

So far the woman has been feeling nauseated and tired but well.

The blood pressure is 120/78 mmHg. The fundus is palpable 2 cm above the umbilicus. Two separate fetal hearts are heard on hand-held fetal Doppler, one 143/min, the other 130/min. 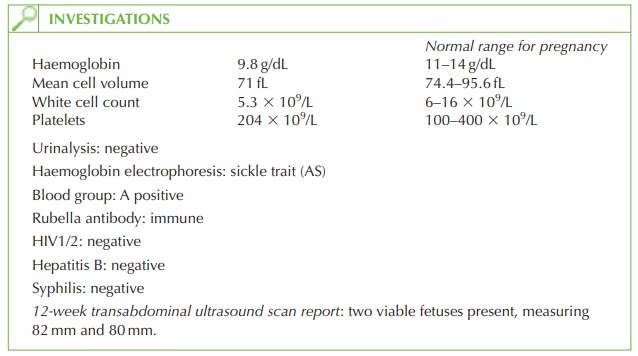 The ultrasound confirms a twin pregnancy with a lambda sign (projection of placental tis- sue between the dividing membranes). This is suggestive of a dichorionic pregnancy. The woman is anaemic with a low mean cell volume suggestive of iron-deficiency anaemia. The only other investigation of note is that the woman has sickle trait.

Although the pregnancy appears dichorionic diamniotic (DCDA), this does not inform us about zygosity. A monozygotic pregnancy may be DCDA if the embryo has split at an early stage. One third of monozygotic pregnancies are DCDA, two-thirds monochorionic diamni- otic and around 1 per cent are monochorionic monoamniotic. Confirmation of zygosity is with placental histology, or by observing that the fetuses are of different genders.

The fetuses are at risk of intrauterine growth restriction, prematurity, stillbirth or neonatal death, congenital anomalies and operative delivery.

In addition to routine antenatal care this woman needs:

·              information regarding the increased maternal and fetal risks with twin pregnancy

The woman has sickle trait and her partner should also be tested. If he is also sickle trait positive then prenatal testing of the babies should be offered to determine whether they are homozygous and therefore going to be affected by sickle cell disease.