Questions · How would you explain the report to the couple? · What are the options available to the couple now and what are their relative advan- tages and disadvantages? · The couple chose to have a further test and the results are normal, what further diag- noses should be considered?

A woman aged 34 years is 9 weeks’ gestation in her third pregnancy. Her first pregnancy ended in a first-trimester suction termination at 18 years of age and she had a miscarriage 8 months ago requiring evacuation of retained products of conception (ERPC). She is gen- erally well except for mild asthma.

She has no family history of congenital abnormalities. She is a non-smoker and currently drinks approximately 3 units of alcohol per week. Her only medication is folic acid 400 μg daily.

Her partner is 31 years old and was adopted. He has no known medical problems.

The routine booking blood and urine tests are normal. The couple opt for Down’s syndrome screening and a first-trimester ultrasound appointment is booked for 12 weeks. 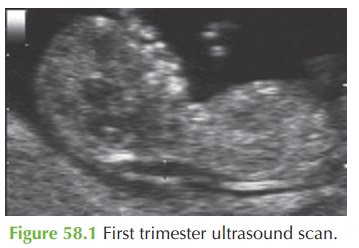 ·              What are the options available to the couple now and what are their relative advan- tages and disadvantages?

·              The couple chose to have a further test and the results are normal, what further diag- noses should be considered?

Explanation of the report

Down’s syndrome screening can be difficult to explain, and any discussion should start with checking that the couple understand what Down’s syndrome is:

·              associated with physical abnormalities which may be relatively minor, such as short stature, abnormal facial appearance, or major, such as severe cardiac abnormality

·              always associated with learning disability, though the extent is variable

The ‘nuchal translucency’ test is a screening test and does not give a definite answer as to whether the pregnancy is affected or not. The risk in this case based on the mother’s age alone is 1 in 276, but the high NT measurement combined with the maternal age suggests that the risk for this particular baby is 1 in 30. Most women even with a high risk result actually have a normal fetus (a false-positive result).

Any risk above 1 in 250 to 300 is considered ‘high risk’ and such women are offered diagnostic testing to give a definite diagnosis. Samples are obtained by chorionic villous sampling (CVS) at 11–14 weeks or by amniocentesis from 15 weeks. Both involve an ultra- sound-guided needle inserted through the abdominal wall under local anaesthetic. Both are associated with approximately 1 in 100 risk of procedure-related miscarriage. CVS can be performed earlier, which allows for earlier termination if that is chosen, but has a risk of not giving a true result (mosaicism). Amniocentesis is performed from 15 weeks and has no risk of placental mosaicism.

A couple may alternatively choose to avoid invasive testing and have a detailed anomaly scan at 20 weeks to assess for ‘soft markers’ of Down’s syndrome (such as skull abnormal- ities, ventriculomegaly, atrial septal defect, duodenal atresia, echogenic bowel, hydronephrosis and short limbs).

This couple opts for amniocentesis at 16 weeks’ gestation and the result is:

Fetuses with a high-risk NT but normal karyotype have an increased likelihood of other structural defects such as congenital heart disease, exomphalos, diaphragmatic hernia and skeletal defects. This couple should therefore have a detailed anomaly scan and fetal car- diac echo at around 20 weeks’ gestation.