Questions · What is the diagnosis? · How would you further investigate and manage this woman? · How will this diagnosis affect the pregnancy?

A 36-year-old woman is complaining of itching. She is currently 34 weeks’ gestation in her first ongoing pregnancy, having had two previous early miscarriages. The itching started 2 weeks ago and she had been using emollient cream to try and relieve it. Initially it was mainly over her soles and palms, although it is now more generalized. She is not aware of having changed her washing powder or soap recently and no one else in her family has been affected.

She has not experienced any abdominal pain although she does have Braxton Hicks con- tractions. There is no vaginal discharge or bleeding. She has noticed the baby move more than 10 times in the last 12 h.

No rash is visible on the face, trunk, limbs, hands or feet except for a few excoriation marks.

The symphysiofundal height is 34.5 cm and the uterus is soft and non-tender. The fetus is cephalic with 4/5 palpable abdominally. 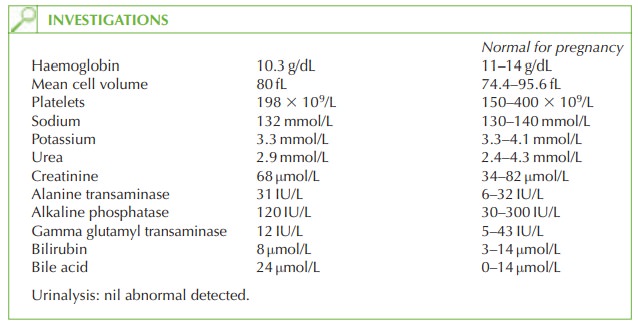 The woman is suffering from obstetric cholestasis (OC). This is a pregnancy-specific con- dition in which there is intrahepatic reduction of bile excretion from the liver, causing a build-up of serum bile acids. It usually develops in the third trimester. The effect on the mother is of itching, which may be very distressing. In more severe cases the liver function or coagulation become deranged and if they do then other diagnoses such as HELLP syndrome (haemolysis, elevated liver enzymes and low platelets – a severe form of pre-eclampsia) or hepatitis should be considered. An ultrasound should be performed to exclude other causes of obstruction such as gallstones.

There is no long-term harm to the mother. The effect on the baby however is potentially much more serious with an association between OC and stillbirth.

Symptomatic relief is obtained from chlorpheniramine (antihistamine). Ursodeoxycholic acid can be given to relieve itching in more severe cases, as it reduces serum bile acids.

Vitamin K (needed for clotting factors) should be given orally to the mother to reduce the risk of fetal or maternal haemorrhage caused by impaired absorption.

Maternal liver function returns to normal after delivery, but the mother should be warned that recurrence may occur in a subsequent pregnancy (50 per cent) or with use of the com- bined oral contraceptive pill.