Questions · What is the diagnosis? · How should this woman be managed?

This evening she noticed a small ‘gush’ of blood and discovered a bright red stain in her underclothes. She denies actual abdominal pain but reports some intermittent lower abdominal discomfort. The baby has been moving normally during the day.

She is warm and well perfused. Her blood pressure is 158/87 mmHg and heart rate 84/min. The symphysiofundal height is 36 cm and the fetus is cephalic with 3/5 palpable abdomin- ally. Moderate uterine tenderness is noted. The uterus is soft but during the palpation two moderate uterine tightenings are noted. On speculum examination the cervical os is closed and there is a moderate amount of vaginal blood. 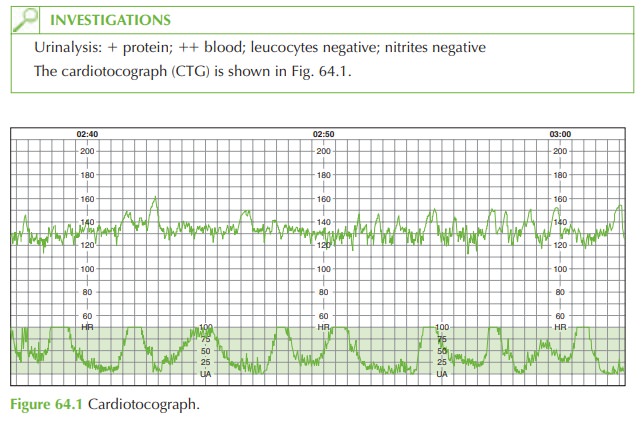 The diagnosis is of placental abruption in view of the bleeding, uterine tenderness and irritability. CTG is reassuring at present with baseline 130 beats/min, normal variability, several accelerations and no decelerations. Regular uterine activity is demonstrated on the tocograph.

A ‘show’ can be ruled out, as the blood is fresh rather than mucus-like and dark. Placenta praevia would have been detected at the anomaly scan, and bleeding placenta praevia is typically painless. She has no features suggesting infection, and vasa praevia bleeding would normally occur with rupture of membranes. Placental abruption is supported by the history of fresh bleeding and uterine irritability and the associated high blood pres- sure and proteinuria (pre-eclampsia is a cause of abruption).

Placental abruption may be major with catastrophic haemorrhage or, as in this case, be less dramatic. However, caution should be maintained for two reasons: first, a small bleed may herald a larger bleed. Second, although some bleeding is revealed, there may be a more significant concealed bleed. Pregnant women may not show any signs of hypo- volaemic shock until a large amount of blood has been lost.

Women with APH should always be admitted for observation. Initial management for this woman includes intravenous access, group and save, full blood count and clotting profile. Urea, electrolytes and urate should be sent, looking for abnormalities associated with pre- eclampsia; 24-h urine collection for proteinuria is not indicated in this case as induction of labour is already indicated on clinical grounds. Blood pressure should be repeated at regular intervals and antihypertensives commenced if indicated.

Induction of labour may increase the chance of operative intervention, but the risk of expectant management is that sudden and catastrophic further haemorrhage may occur. As the woman is over 37 weeks, there is little risk to the fetus of prematurity from induction.