Questions · What is the diagnosis? · What are the potential consequences of this problem? · How would you further manage the pregnancy?

A couple attends the obstetric clinic at 20 weeks’ gestation. This is the woman’s fourth pregnancy and second child. She is 27 years old. She had a spontaneous vaginal delivery 4 years ago and this was followed by two miscarriages, the first at 8 weeks and the sec- ond at 14 weeks, for which no cause was identified.

In this pregnancy she has been generally well except for severe hyperemesis which has now resolved. Her 11–14-week scan confirmed her menstrual dates and she was given a risk of Down’s syndrome from her nuchal test of 1 in 2543. Her anomaly scan has just been performed and shows no fetal abnormalities, and normal fetal growth and liquor volume.

She is known to be Rhesus negative and her booking and subsequent haematological blood tests are as shown.

The diagnosis is Rhesus sensitization as the serum anti-D titre is increasing, suggesting that sometime exposure to Rhesus positive cells has sensitized her, causing her to produce an immune response (anti-D). This may have occurred if she was not given anti-D at the time of a previous pregnancy.

Immunoglobulin G (IgG) anti-D antibodies cross the placenta and attack fetal Rhesus- positive red cells. This causes fetal haemolysis (haemolytic disease of the newborn or the fetus) manifesting as fetal anaemia, with subsequent fetal hydrops (excessive accumula- tion of extravascular fluid e.g. peritoneal, pleural, pericardial). Intrauterine death may occur if the anaemia is not treated. In milder cases, the baby may be severely jaundiced at delivery, which may result in neurological impairment. For the mother there is a potential difficulty crossmatching blood should she have a haemorrhagic complication and need transfusion, due to the presence of the antibodies.

The maternal antibody level should be monitored two weekly. If the titre exceeds 15 IU/mL, fetal ultrasound should be performed to assess for growth retardation, signs of hydrops and liquor volume. Cordocentesis (sampling fetal blood by ultrasound-guided aspiration from the umbilical cord) is needed to determine haemoglobin and to facilitate fetal blood transfusion. If the antibody titre does not increase further then ultrasound observation is likely to be sufficient.

In this case, the antibody titre was 15 IU/mL 2 weeks later and the fetus required three in utero transfusions during the pregnancy, with delivery by Caesarean section at 36 weeks.

Fifteen per cent of women are Rhesus negative, but due to anti-D prophylaxis, the inci- dence of Rhesus disease is now very low. 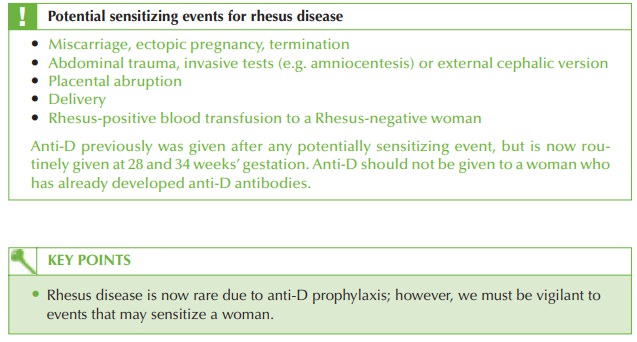