Questions · What is the likely underlying diagnosis for the recurrent miscarriages? · What further investigation should be performed? · How should this patient be managed?

A 34-year-old woman is referred from the emergency room with vaginal bleeding at 6 weeks and 5 days’ gestation. Bleeding started 2 days ago and was initially spotting but has now increased so that she needs to change a sanitary towel regularly. There is a mild dull lower abdominal pain.

She normally has regular 28-day cycle. In the past she has used the combined oral con- traceptive pill but stopped 3 years ago when she and her partner decided to start a family.

She is gravida 3 para 0. Her first pregnancy ended in a complete miscarriage 2 years ago. Five months ago she had a missed miscarriage at 9 weeks and required ERPC (evacuation of retained products of conception).

There is no gynaecological history of note. Medically she is fit and healthy, except for mild asthma for which she takes inhalers.

The woman’s mother died from a pulmonary embolism after her last child. Her brother also had a deep venous thrombosis at the age of 29 years. Her sister has two children, both born preterm because of severe pre-eclampsia.

The abdomen is non-distended but tender suprapubically. The cervical os is open and products of conception are removed from the os and sent for histological examination.

·             What is the likely underlying diagnosis for the recurrent miscarriages?

Thus in this case the diagnosis must be confirmed by a second positive anticardiolipin test after at least 6 weeks. She should also be tested for antinuclear and anti-double-stranded DNA antibodies as antiphospholipid syndrome is often secondary to systemic lupus erythematosus (SLE).

Oral low-dose aspirin and low-molecular-weight subcutaneous heparin from the time of a positive pregnancy test should be given in subsequent pregnancies to improve the likeli- hood of a successful live birth. 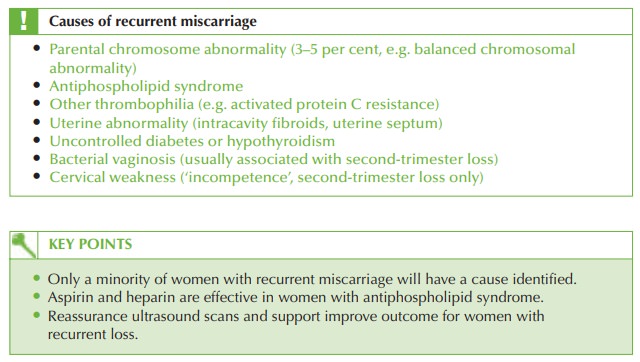