Questions · What is the diagnosis? · How would you further manage this woman?

A 29-year-old woman presents with lower abdominal pain for 4 years occurring with her periods. She takes paracetamol and ibuprofen and goes to bed with a hot water bottle for up to 2 days every month. For the last 18 months pain has also occurred in between periods.

The pain is dull and constant across the lower abdomen. Her periods are regular and there is no menorrhagia, intermenstrual or postcoital bleeding. There is no other significant medical history.

She has been married for 2 years and has deep dyspareunia which makes her interrupt intercourse. She does not use any contraception, as they are keen to start a family. She has never been pregnant in the past.

There is generalized lower-abdominal tenderness, particularly in the suprapubic area but no masses are palpable. Speculum examination is unremarkable. On bimanual palpation the uterus is axial and fixed with cervical excitation. The pouch of Douglas is very tender and contains a mass. The adnexae are both tender but no adnexal masses are palpable. 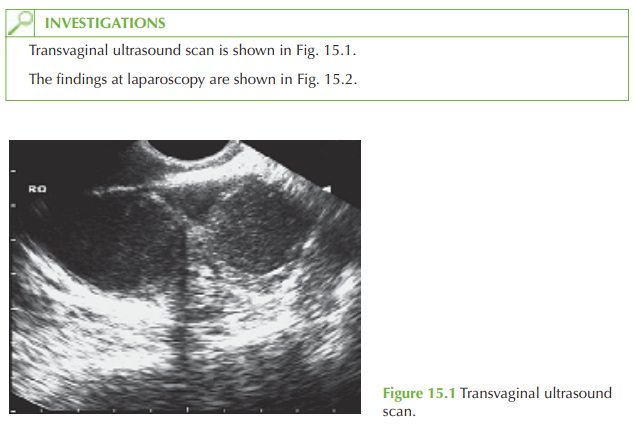 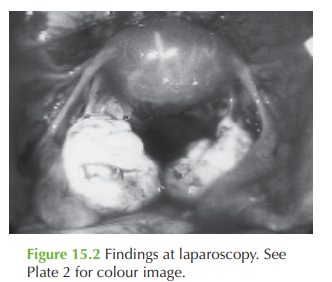 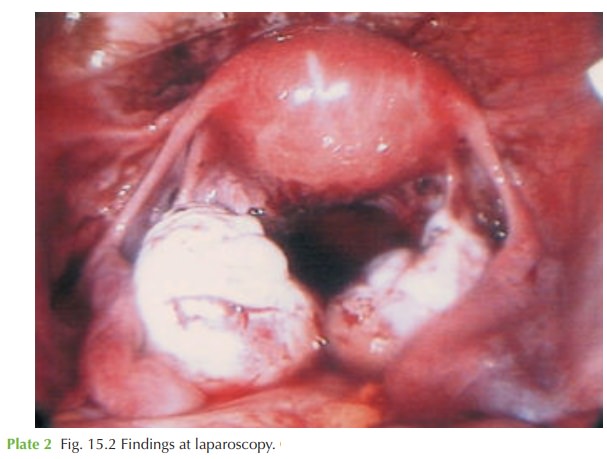 The history of dysmenorrhoea and dyspareunia are classic for endometriosis, and the ultrasound examination and laparoscopy images show bilateral endometriomas (‘choc- olate cysts’), a complication of this disease.

Endometriosis is a common condition where active endometrial glands and stroma are located outside the endometrial cavity. Endometriomas develop as ectopic endometrial tissue on the ovary produces blood, which builds up into an encapsulated cyst with each consecutive menstrual cycle.

Endometriosis is benign but carries a high physical and psychological morbidity due to the clinical features:

Examination findings include tenderness or a pelvic mass, and may include palpable nod- ules in the rectovaginal septum and a fixed retroverted uterus secondary to adhesions (the frozen pelvis).

Diagnosis is made at laparoscopy, although ultrasound features such as these ovarian cysts containing ‘ground-glass’ echoes can be suggestive.

The mainstay of management for endometriosis is surgical, with ablation or excision of endometriotic deposits by laparoscopy. In this case there are bilateral endometriotic cysts that need to be removed laparoscopically by incision and drainage with excision of the cyst capsules. Surgical treatment should relieve the dyspareunia and dysmenorrhoea and may improve fertility in more severe disease.

Medical suppression of endometriosis is possible with the contraceptive pill or gonadotrophin-releasing hormone analogues, which inhibit ovulation and hence stimul- ation of endometrial deposits by oestrogen. However these are ineffective for endometri- omas. The levonorgestrel-releasing intrauterine device has also been used to suppress endometriosis and reduce symptoms.