Questions · What is the likely diagnosis? · How would you manage this patient?

A 59-year-old woman awoke with blood on her nightdress, which was bright red but not heavy. There were no clots of blood and there was no associated pain. The bleeding has recurred twice since in similar amounts.

Her last period was at the age of 49 years and she has had no other intervening bleeding episodes. She suffered hot flushes and night sweats around the time of her menopause, which have now stopped. She is sexually active but has noticed vaginal dryness on inter- course recently.

She has always had normal cervical smears, the last one being 7 months ago. She had two children by spontaneous vaginal delivery and had a laparoscopic sterilization aged 34 years. She has never used hormone-replacement therapy (HRT). She takes atenolol for hypertension and omeprazole for epigastric pain.

She is slightly overweight. Abdominal examination is normal. The vulva and vagina appear thin and atrophic and the cervix is normal. The uterus is small and anteverted and with no palpable adnexal masses.

An outpatient endometrial biopsy is taken at the time of examination and sent for histo- logical examination. 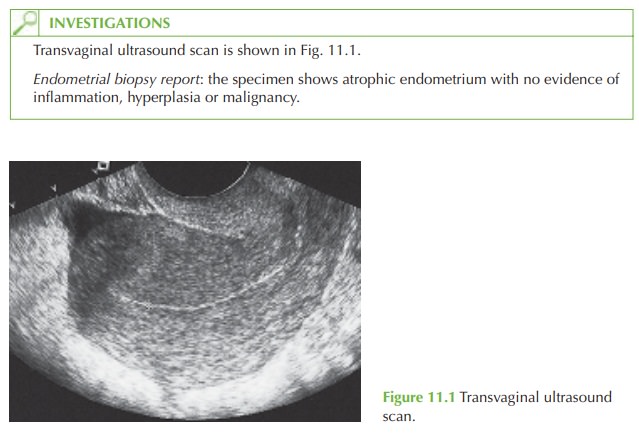 In this case the endometrium is <5 mm on ultrasound, which effectively excludes an endome- trial malignancy or polyp. The normal endometrial biopsy report confirms the absence of endometrial pathology. The smear history is normal, and the cervix appears normal, excluding cervical cancer. She is not taking any medication that may predispose to abnor- mal bleeding.

The diagnosis of atrophic vaginitis can therefore be made by exclusion of serious causes, and is backed up by the history of vaginal dryness at sexual intercourse and the atrophic vulva and vagina noted on examination.

Treatment is hormonal with a course of topical oestrogen given daily for 3 weeks and then twice weekly for maintenance, for an initial period of 2-3 months. An alternative solution is to give a combined form of systemic HRT to protect the endometrium.

Some women are reluctant to use HRT because of the associated risks, and therefore advice should be given about vaginal lubricants which decrease discomfort but have no reparative value. If bleeding recurs after treatment or the diagnosis is in doubt, then fur- ther investigation with hysteroscopy and dilatation and curettage is needed.