Questions · What is the differential diagnosis? · How would you further determine the cause of the symptoms and manage this patient?

A 37-year-old mother presents to her general practitioner with cyclical labile mood swings. She says that she has always suffered with ‘PMS’ (premenstrual syndrome) and that it is in the family as her mother had to have a hysterectomy for the same problem. She reports her periods as always having been painful and that she has always been irrit- able leading up to a period. However now she feels that she is not herself for at least 2 weeks before her period and that the pain has worsened. She also notices headaches, swelling and breast tenderness.

Her periods are generally with regular bleeding for up to 6 days every 27–31 days. She has had three children all by normal vaginal delivery and the youngest is now 5 years old. She has no other medical history of note.

She has been married for 14 years and she says she often feels aggressive towards her hus- band or alternatively is tearful and low. Prior to having children she worked in a bank and is not sure whether to return as she feels she might be unable to cope.

No abnormality is found on abdominal or neurological examination.

·             How would you further determine the cause of the symptoms and manage this patient?

The woman clearly feels that this is a gynaecological problem and that she has PMS. The diagnosis should be confirmed with evidence of symptoms occurring in the luteal phase and resolving within a day or two of menstruation starting. The differential diagnosis is depression which can manifest in a similar way to PMS.

A symptom diary is needed for recording symptoms for each day, over a 3-month period. The woman should annotate a chart with the severity of each symptom and when menstruation occurs. PMS should start after midcycle, symptoms should resolve with the period, and there should be a number of symptom-free days each month. 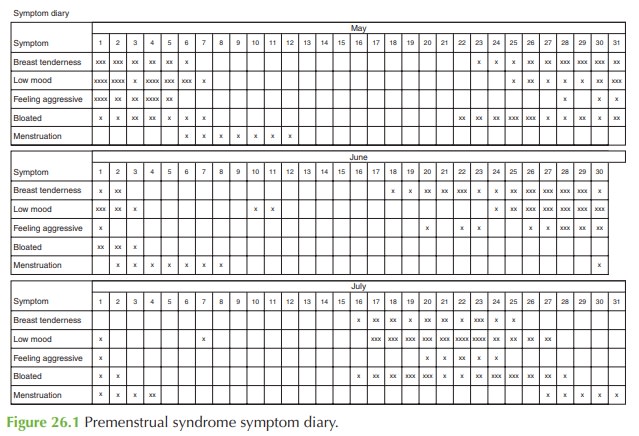 If confirmed then the diagnosis should be discussed with the woman, offering appropriate understanding and support but explaining that management is variable in the success for each woman and that ‘one size does not fit all’. Vitamins and oil of evening primrose are not proven in trials but may have a placebo effect.

Interruption of ovulation with the oral contraceptive pill is often successful in women under the age of 35 years.

Selective serotonin reuptake inhibitors have a good success rate in randomized trials, and the woman should be advised that they have a specific effect with PMS rather than just a general antidepressant effect.

Hysterectomy would not be helpful unless the ovaries were also removed, and this would involve risk of significant morbidity with the need for hormone-replacement therapy afterwards which may have its own side-effects or complications.