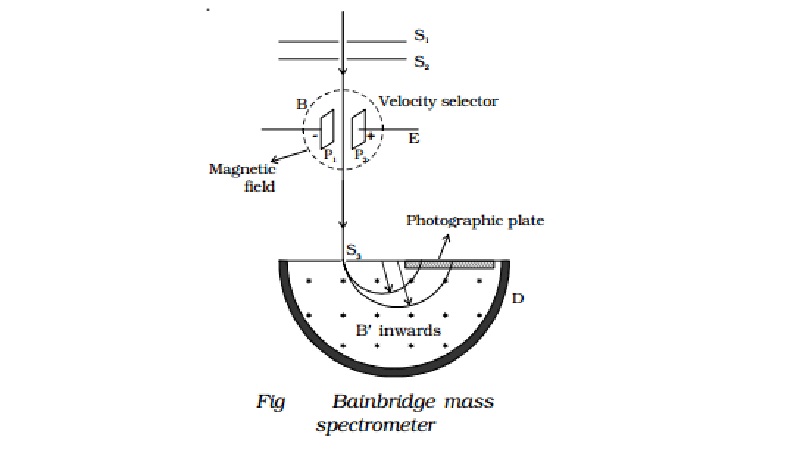 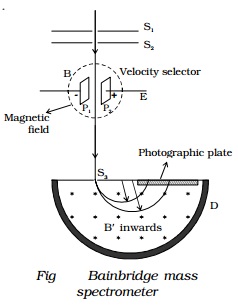 Atoms  with  one  or  more electrons  removed,  have  a  net positive charge and they become positive ions. A beam of positive ions produced in a discharge tube is collimated into a fine beam by two narrow      slits   S1  and       S2. This fine  beam        enters  into  a       velocity selector. The velocity selector allows the ions of a particular velocity to come out of it, by the combined action of an electric and a magnetic field. The velocity selector consists of two plane parallel plates P1 and P2, which produces a uniform electric field E and an electromagnet, to produce uniform magnetic field B (represented by the dotted circle). These two fields are at right angles to each other and to the direction of the beam.

Only those ions having this velocity v, pass out of the velocity selector and then through the slit S3, to enter the evacuated

chamber D. These positive ions having the same velocity are subjected to another strong uniform magnetic field of induction B′ at right angles to the plane of the paper acting inwards. These ions are deflected along circular path of radius R and strike the photographic plate. The force due to magnetic field B′qv provides the centripetal force.

Ions with different masses trace semi-circular paths of different radii and produce dark lines on the plate. The distance between the opening of the chamber and the position of the dark line gives the diameter 2R from which radius R can be calculated.

Since q, B, B′, E and R are known, the mass of the positive ions and hence isotopic masses can be calculated.