de Broglie wavelength of matter waves and an electron

de Broglie equated the energy equations of Planck (wave) and Einstein (particle). For a wave of frequency ν, the energy associated with each photon is given by Planck's relation, E = hν where h is Planck's constant.

The radiant energy has dual aspects of particle and wave, hence a natural question arises, if radiation has a dual nature, why not the matter. In 1924, a French Physicist Louis de Broglie put forward the bold hypothesis that moving particles should possess wave like properties under suitable conditions. He reasoned this idea, from the fact, that nature is symmetrical and hence the basic physical entities

- matter and energy should have symmetrical characters. If radiation shows dual aspects, so should matter.

For a wave of frequency ν, the energy associated with each photon is given by Planck's relation,

where h is Planck's constant.

According  to  Einstein's  mass  energy  relation,  a  mass  m  is equivalent to energy,

where c is the velocity of light.

For a particle moving with a velocity v, if c = v

where p = mv, the momentum of the particle. These hypothetical matter waves will have appreciable wavelength only for very light particles.

de Broglie wavelength of an electron

When an electron of mass m and charge e is accelerated through a potential difference V, then the energy eV is equal to kinetic energy of the electron.

The de Broglie wavelength is ,

Substituting the value of v

Substituting the known values in equation (2),

Since E = eV is kinetic energy associated with the electron, the equation (2) becomes,

According to de Broglie's hypothesis, an electron of mass m in motion with a velocity v is associated with a wave whose wavelength λ is given by

where h is Planck's constant.

On the basis of de Broglie's hypothesis, an atom model was proposed in which the stationary orbits of Bohr's model were retained, but with the difference that electron in various orbits behaves as a wave. This is shown in Fig.

It was suggested that stationary orbits are those in which orbital circumference (2πr) is an integral multiple of de Broglie wavelength λ,

i.e., stationary orbits for an electron are those which contain the complete waves of electron. 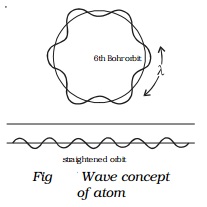 From equation (3), it is seen that the total angular momentum of the moving electron is an integral multiple of h/2π Thus, de Broglie's concept confirms the Bohr's postulate.