1. Explain how the definition of work in physics is different from general percep-tion.

2. Write the various types of potential energy. Explain the formulae.

3. Write the differences between conservative and Non-conservative forces. Give two examples each.

4. Explain the characteristics of elastic and inelastic collision.

a) Coefficient of restitution

c) Law of conservation of energy

1. Explain with graphs the difference between work done by a constant force and by a variable force.

2. State and explain work energy principle. Mention any three examples for it.

3. Arrive at an expression for power and velocity. Give some examples for the same.

4. Arrive at an expression for elastic collision in 1 Dimension and discuss various cases.

2. A ball with a velocity of 5 m s-1 impinges at angle of 60˚ with the vertical on a smooth horizontal plane. If the coefficient of restitution is 0.5, find the velocity and direction after the impact.

The impluse on the ball acts perpendicular to the smooth plane.

(i) The component of velocity of ball parallel to the surface.

(ii) For the component of velocity of ball perpendicular to the surface, apply law of restitution.

The component of velocity parallel to the surface will be changed.

According to law of restitution 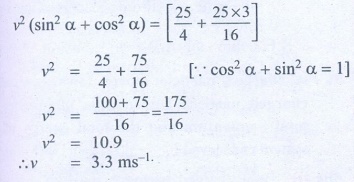 3. A bob of mass m is attached to one end of the rod of negligible mass and length r, the other end of which is pivoted freely at a fixed center O as shown in the figure. What initial speed must be given to the object to reach the top of the circle? (Hint: Use law of conservation of energy). Is this speed less or greater than speed obtained in the section 4.2.9? 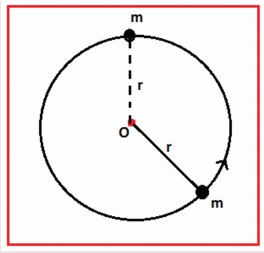 The horizontal distance, draw the point of projection to the point where the ball returns to the same level

Momentium is censerved in both × and y direction.

5. A bullet of mass 20 g strikes a pendulum of mass 5 kg. The centre of mass of pendulum rises a vertical distance of 10 cm. If the bullet gets embedded into the pendulum, calculate its initial speed.

Speed of the bullet = u1

From II equation of motion

Substitute the value of v in equation (1)

1. A spring which in initially in un-stretched condition, is first stretched by a length x and again by a further length x. The work done in the first case W1 is one third of the work done in second case W2. True or false? 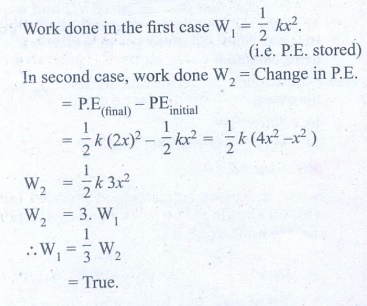 2. Which is conserved in inelastic collision? Total energy (or) Kinetic energy?

But K.E. is not conserved.

3. Is there any net work done by external forces on a car moving with a constant speed along a straight road?

If a car is moving at a constant speed, then external force will be zero.

4. A car starts from rest and moves on a surface with uniform acceleration.

Draw  the  graph  of  kinetic  energy versus displacement. What information you can get from that graph? 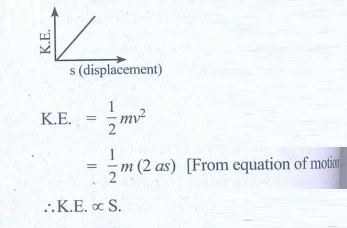 (i) Both charged particles shall be dissimilar charge, (i.e. positive and negative)

(ii) After collision the charged particles; stick together permanent.

(iii) They should move with common velocity