Solved Example Problems for Law of conservation of energy

Physics : Work, Energy and Power : Law of conservation of energy

Solved Example Problems for Law of conservation of energy

An object of mass 1 kg is falling from the height h = 10 m. Calculate

b. Potential energy of the object when it is at h = 4 m

d. What will be the speed of the object when it hits the ground?

a. The gravitational force is a conservative force. So the total energy remains constant throughout the motion. At h =10 m, the total energyE is entirely potential energy.

b. The potential energy of the object at h = 4 m is

Alternatively, the kinetic energy could also be found from velocity of the object at 4 m. At the height 4 m, the object has fallen through a height of 6 m.

The velocity after falling 6 m is calculated from the equation of motion, 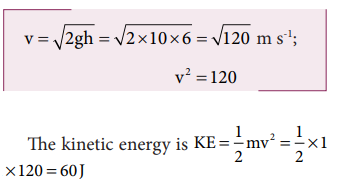 d. When the object is just about to hit the ground, the total energy is completely kinetic and the potential energy, U = 0.

A body of mass 100 kg is lifted to a height 10 m from the ground in two different ways as shown in the figure. What is the work done by the gravity in both the cases? Why is it easier to take the object through a ramp? 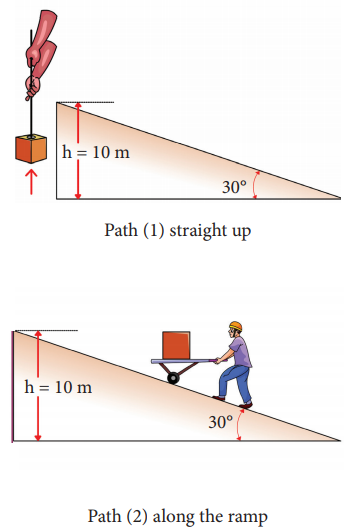 The work done on the object along path (1) is

In the case of the ramp, the minimum force F2 that we apply on the object to take it up is not equal to mg, it is rather equal to mg sinθ .(mg sin < mg) .

The path covered along the ramp is,

Since the gravitational force is a conservative force, the work done by gravity on the object is independent of the path taken.

In both the paths the work done by the gravitational force is 10,000 J

Along path (1): more force needs to be applied against gravity to cover lesser distance .

Along path (2): lesser force needs to be applied against the gravity to cover more distance.

An object of mass m is projected from the ground with initial speed v0.

Find the speed at height h.

Since the gravitational force is conservative; the total energy is conserved throughout the motion. 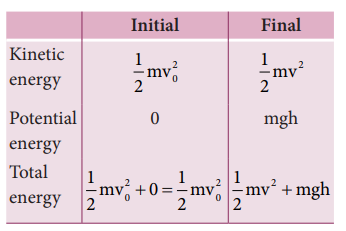 Final values of potential energy, kinetic energy and total energy are measured at the height h.

By law of conservation of energy, the initial and final total energies are the same. 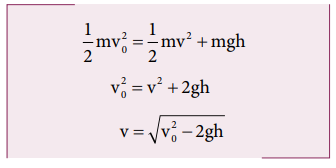 Note that in section (2.11.2) similar result is obtained using kinematic equation based on calculus method. However, calculation through energy conservation method is much easier than calculus method.

An object of mass 2 kg attached to a spring is moved to a distance x =10 m from its equilibrium position. The spring constant k =1 N m-1and assume that the surface is frictionless.

a. When the mass crosses the equilibrium position, what is the speed of the mass?

b. What is the force that acts on the object when the mass crosses the equilibrium position and extremum position x = ± 10 m.

When the mass crosses the equilibrium position x = 0 , the potential energy

The entire energy is purely kinetic energy at this position. 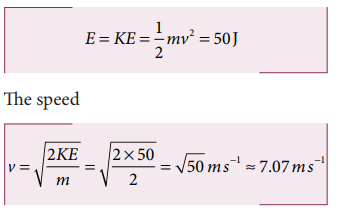 The object comes to momentary rest at x = ±10m even though it experiences a maximum force at both these points.