The potential energy of a body is associated with its position and configuration with respect to its surroundings.

We have various types of potential energies. Each type is associated with a particular force. For example,

(ii) The energy due to spring force and other similar forces give rise to elastic potential energy.

Potential energy near the surface of the Earth

The gravitational potential energy (U) at some height h is equal to the amount of work required to take the object from ground to that height h with constant velocity.

Let us consider a body of mass m being moved from ground to the height h against the gravitational force as shown in Figure 4.8. 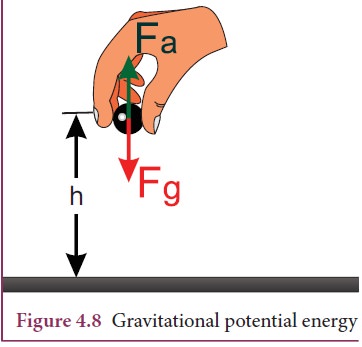 g acting on the body is,

g = - mg jˆ (as the force is in y direction, unit vector ˆj is used). Here, negative sign implies that the force is acting  vertically downwards. In order to move the body without acceleration (or with constant velocity), an external applied force

a equal in magnitude but opposite to that of gravitational force

g has to be applied on the body i.e.,

g  . This implies that

a  = + mg jˆ. The positive sign implies that the applied force is in vertically upward direction. Hence, when the body is lifted up its velocity remains unchanged and thus its kinetic energy also remains constant.

The gravitational potential energy (U) at some height h is equal to the amount of work required to take the object from the ground to that height h.

Since the displacement and the applied force are in the same upward direction, the angle between them, θ=0o. Hence, cos00 =1 and |

a. Calculate the potential energy stored in the object.

b. Where does this potential energy come from?

c. What external force must act to bring the mass to that height?

d. What is the net force that acts on the object while the object is taken to the height ‘h’?

Here the positive sign implies that the energy is stored on the mass.

b. This potential energy is transferred from external agency which applies the force on the mass. 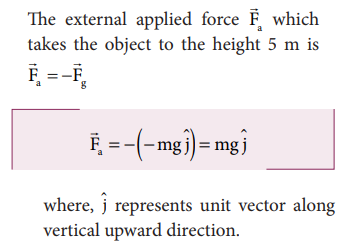 d. From the definition of potential energy, the object must be moved at constant velocity. So the net force acting on the object is zero.