1. Explain with graphs the difference between work done by a constant force and by a variable force.

Work done by a constance force :

● When a constant force F acts a body the small workdone (dw) by the force in producing a small displacement dr is given by the relation. 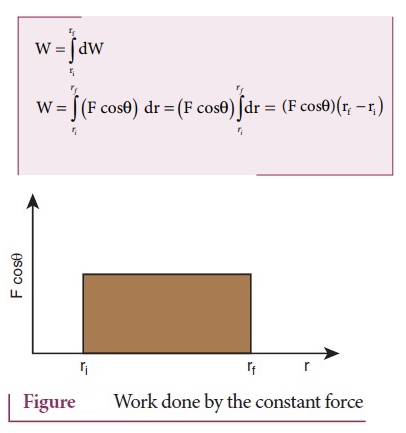 Work done by a variable force

● When the component of a variable force F acts on a body, the small work done (dw) by the forces in producing a small displacement dr is given by the relation.

Where F and θ are variables

● The total work done for a displacement from initial position ri to final position rf is given by the relation,

● A graphical representation of the work done by a variable force is shown in figure.

● The area under the graph is the work done by the variable force. 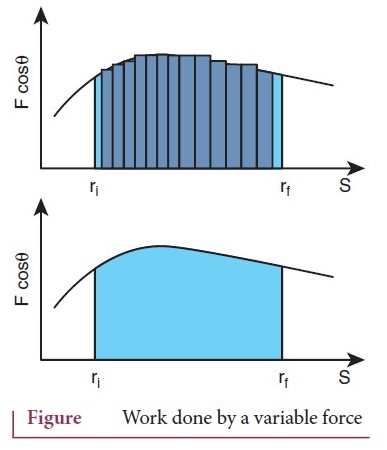 2. State and explain work energy principle. Mention any three examples for it.

● Work and energy are equivalents. This is true in the case of kinetic energy also.

● To prove this, let us consider a body of mass at rest on friction less horizontal surface.

● The work done (w) by the constant force (F) for a displacement (s) in the same direction is.

● The constant force is given by the equation

● The third equation of motion can be written as

The expression for kinetic energy

● Kinetic energy of the body is always positive.

1. If the work done by the force on the body is positive, then its kinetic energy increases.

2. If the work done by the force on the body is negative, then kinetic energy decreases.

3. If there is no work done by the force on the body then there is no change in its kinetic energy, which means that the body has moved at constant speed provided its mass remains constant.

3. Arrive at an expression for power and velocity. Give some examples for the same.

● The work done by a force

for a displacement d

● Left hand side of the equation (1) can be written as

(Multiplied and divided by dt)

● Right hand side of the equation (1) can be written as

● The relation is true for any arbitrary value of dt. This implies that the term with in the bracket must be equal to zero,

4. Arrive at an expression for elastic collision in 1 Dimension and discuss various cases.

● Consider two elastic bodies of masses m1 and m2 moving in a straight line (along positive x direction) on a friction less horizontal surface as shown in figure. 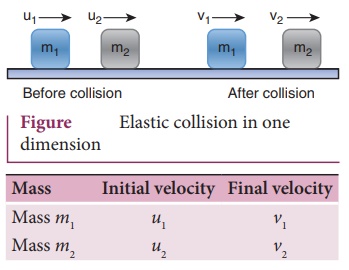 ● The mass m1 moves faster than mass m2 (i.e. u1 > u2). For elastic collision, the total linear momentum and kinetic energies of the two bodies before and after collision must remain the same.

● From the law of conservation of linear momentum

Equation (5) can be re written as,

● For any elastic head on collision, the relative speed of the two elastic bodies after the collision has the same magnitude as before collision but in opposite direction.

Rewritting the above equation for and v1 and v2

To find the velocities of v1 and v2 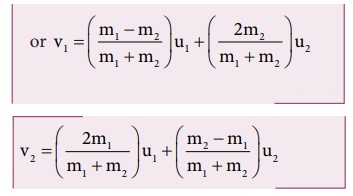 Case : I When bodies has the same mass

The equation (10) and (11) show that in one dimensional elastic collision, when two bodies of equal mass collide after the collision their velocities are exchanged.

Equation (12) and (13) shows that when the first body comes to rest the second body moves with initial velocity of the first body.

Case 3: The first body is very much lighter than the second body. 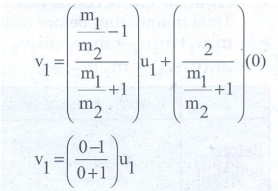 ● Similiarly dividing numerator and denominator of equation (9) by m2 we get, 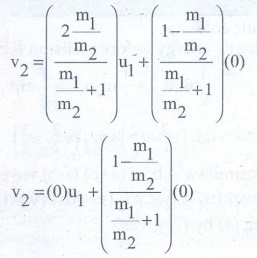 ● The equation (14) implies that the first body which is lighter returns back (rebounds) in the opposite direction with the same initial velocity as it has a negative sign. The equation (15) implies that the second body which is heavier mass continues to remain at rest even after collision. For example if a ball is thrown at a fixed wall, the ball will bounce back from the wall with the same velocity with which it was thrown but in opposite direction.

● Dividing numerator and denominator of equation (8) by m1 we get, 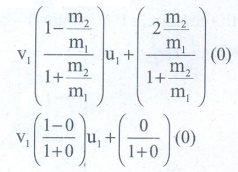 ● Similarly dividing numerator and denominator of equation (13) by m1 we get, 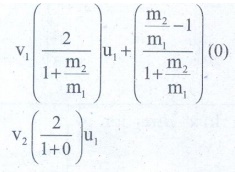 ● The equation (16) implies that the first body which is heavier continues to move with the same initial velocity.

● The equation (17) suggests that the second body which is lighter will move twice the initial velocity of the first body. It means that the lighter body is thrown away from the point collision.

● Even though kinetic energy is not conserved but the total energy is conserved.

● This is because the total energy contains the kinetic energy term and also a term ∆Q, which includes all the losses that take place during collision.

● Note that loss in kinetic energy during collision is transformed to another form of energy like, sound thermal etc.