Power is a scalar quantity. Its dimension is [ML2T-3]. The SI unit of power is watt (W), named after the inventor of the steam engine James Watt. One watt is defined as the power when one joule of work is done in one second, (1 W = 1 J s-1).

For motors, engines and some automobiles an old unit of power still commercially in use which is called as the horse-power (hp). We have a conversion for horse-power (hp) into watt (W) which is,

All electrical goods come with a definite power rating in watt printed on them. A 100 watt bulb consumes 100 joule of electrical energy in one second. The energy measured in joule in terms of power in watt and time in second is written as, 1 J =1 W s. When electrical appliances are put in use for long hours, they consume a large amount of energy. Measuring the electrical energy in a small unit watt. second (W s) leads to handling large numerical values. Hence, electrical energy is measured in the unit called kilowatt hour (kWh). 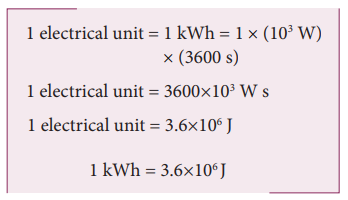 Calculate the energy consumed in electrical units when a 75 W fan is used for 8 hours daily for one month (30 days).

Electrical energy consumed is the product of power and time of usage. 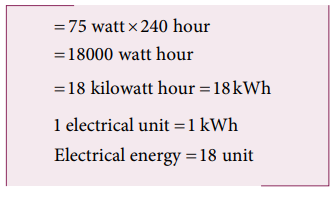