Motion in a vertical circle

There are two forces acting on the mass.

Motion in a vertical circle

Imagine that a body of mass (m) attached to one end of a massless and inextensible string executes circular motion in a vertical plane with the other end of the string fixed. The length of the string becomes the radius (

) makes an angle θ with the vertically downward direction and the instantaneous velocity is as shown in Figure 4.14.

There are two forces acting on the mass.

Applying Newton’s second law on the mass, In the tangential direction,

The circle can be divided into four sections A, B, C, D for better understanding of the motion. The four important facts to be understood from the two equations are as follows:

i. The mass is having tangential acceleration (g sin θ) for all values of θ (except θ = 0o), it is clear that this vertical cirular motion is not a uniform circular motion.

ii. From the equations (4.28) and (4.29) it is understood that as the magnitude of velocity is not a constant in the course of motion, the tension in the string is also not constant.

iii. The  equation T = mg cosθ + mv2/r highlights that in sections A and D of the circle, (for –π/2 < θ < π/2;cosθ is positive)  , the term mg cosθ is always­ greater than zero. Hence the tension cannot vanish even when the velocity vanishes.

iv. The equation mv2/r = T - mg cosθ  further highlights that in sections B and D of the circle, (for –π/2 < θ < 3π/2;cosθ is negative) the second term is  always greater than zero. Hence velocity cannot vanish, even when the tension vanishes.

These points are to be kept in mind while solving problems related to motion in vertical circle. 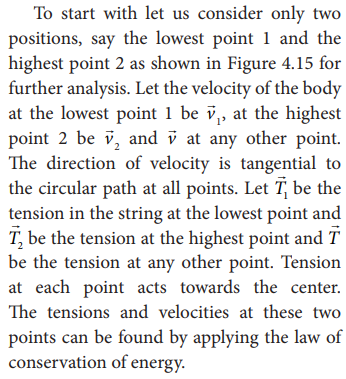 For the lowest point (1)

When the body is at the lowest point 1, the gravitational force m

1 acting vertically upwards, i.e. towards the center. From the equation (4.29), we get 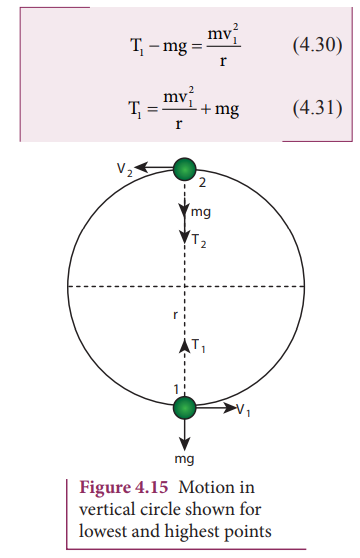 For the highest point (2)

At the highest point 2, both the gravitational force m

on the body and the tension 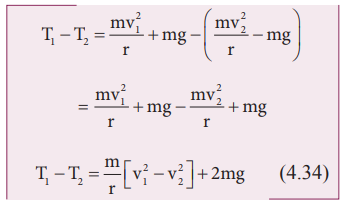 The term [v12 – v22] can be found easily by applying law of conservation of energy at point 1 and also at point 2. 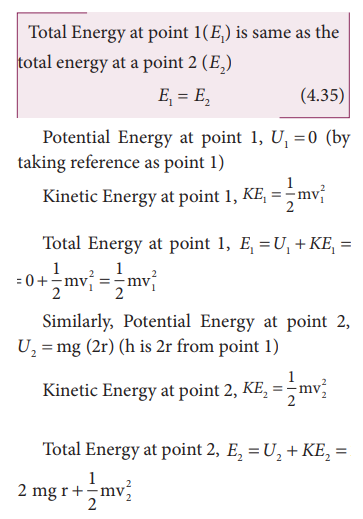 From the law of conservation of energy given in equation (4.35), we get 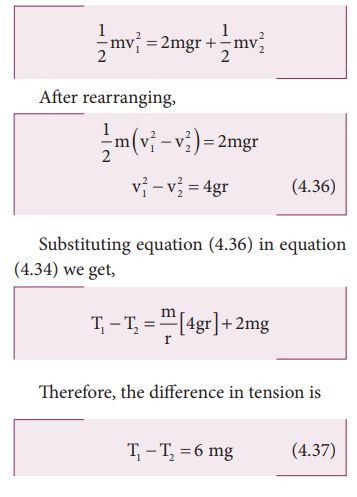 Minimum speed at the highest point (2)

The body must have a minimum speed at point 2 otherwise, the string will slack before reaching point 2 and the body will not loop the circle. To find this minimum speed let us take the tension T2 = 0 in equation (4.33). 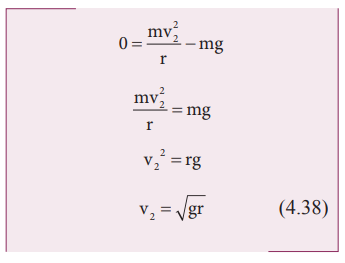 Minimum speed at the lowest point 1

By making use of equation (4.36) we can find the minimum speed at point 1. 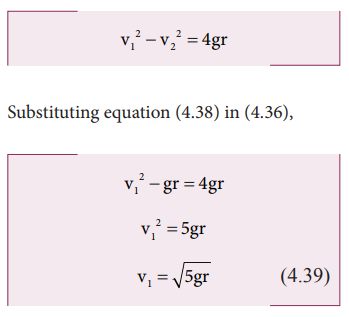 The body must have a speed at point 1, v1≥√5gr to stay in the circular path.

Solved Example Problems for Motion in a vertical circle

Water in a bucket tied with rope is whirled around in a vertical circle of radius 0.5 m. Calculate the minimum velocity at the lowest point so that the water does not spill from it in the course of motion. (g = 10 ms-2)