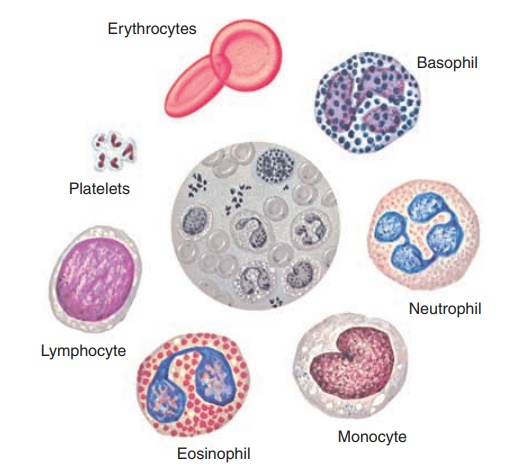 The white blood cell, part of the immune system, provides the body with powerful defenses against infection and tumors.

The white blood cell, part of the immune system, provides the body with powerful defenses against infection and tumors. The white blood cells are divided into two types depending on whether they have gran-ules in the cytoplasm. Those with granules are termed granulocytes (polymorphonuclear leuko-cytes) and those without are termed agranulocytes. The granulocytes have a lobed nucleus (see Figure 8.4), and the granules in the cytoplasm take on dif-ferent colors if stained. Certain cells with small gran-ules in their cytoplasm are called neutrophils. Those cells with granules that stain pink with acid dyes are called eosinophils, and those with granules that stain blue are called basophils. Each granulocytes subtype has specific functions.

There are two types of agranulocytes—lympho-cytes and monocytes. They are involved in humoraland cell-mediated immunity. 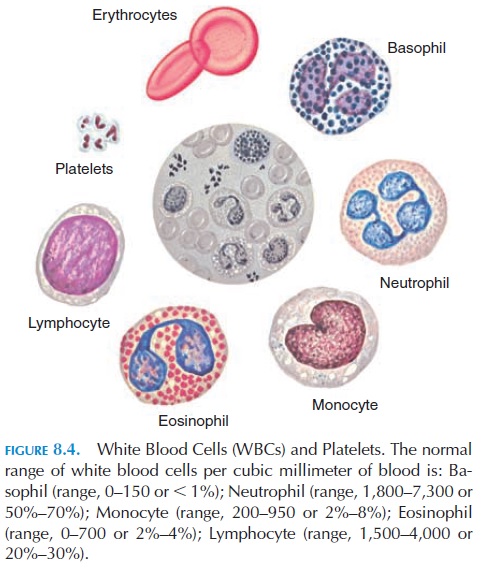 The granulocyte granules contain substances that produce allergic and inflammatory reactions. For ex-ample, granules in basophils and eosinophils contain histamine and heparin, which are released when an individual has an allergic reaction. These substances, together with other chemicals, are responsible for symptoms such as redness, swelling, and watery nose seen in allergy.

As the granules become older, the nucleus has more and more lobes. Because of the different shapes taken by the lobes, the granulocytes are also known as polymorphs orpolymorphonuclear leukocytes.

The granulocytes have phagocytic properties. For example, the neutrophils seek out bacteria and ingest and kill them. Protein molecules on the bacteria sur-face help the neutrophils recognize them as foreign. The neutrophils extend limblike processes from the cytoplasm and engulf foreign agents into the cyto-plasm (phagocytosis). They kill and digest the bacte-ria with the toxic enzymes present in the cytoplasmic granules. These cells are the first line of defense in bacterial infections.

Neutrophils can enter tissue spaces by squeezing between the endothelial cells of the capillaries (dia-pedesis) if there is infection or inflammation. Chem-icals secreted by those neutrophils that have already reached the infection site, together with products re-leased from injured cells, attract large numbers of neutrophils to the infection site (chemotaxis). The cells are produced in large quantities by the bone marrow at the time of infection because each cell only lives for about 6 hours.

Monocytes are large cells with a kidney-shaped nucleus that can also enter the tissue. The monocytes in the tis-sue spaces are called tissue macrophages. The macro-phages may be wandering or fixed macrophages.

Wandering macrophages are defense cells that wander in the tissue, clearing up foreign and dead material. They are attracted to the site of infection by chemicals liberated by other white blood cells or injured tissue and, similar to the neutrophils, engulf and kill bacteria. They secrete up to 100 different substances, including those that affect lymphocytes and other cells. Fixed macrophages are monocytes that have the same func-tion as wandering macrophages but remain in one tis-sue (e.g., in the spleen or liver). Monocytes play a key role in immunity.

Lymphocytes consist of cells with a large nucleus and scanty cytoplasm. Lymphocytes are formed in the bone marrow after birth. But some of the “mother” cells migrate to the lymph nodes, thymus, and spleen and production of lymphocytes also occurs in these regions.