Regulation of the Cardiovascular System

The ultimate objective of the cardiovascular system is to ensure that the tissue blood flow meets the demands for oxygen and nutrients at the right time and region, without drastically altering blood flow to vital organs such as the brain.

Regulation of the Cardiovascular System

The ultimate objective of the cardiovascular system is to ensure that the tissue blood flow meets the demands for oxygen and nutrients at the right time and region, without drastically altering blood flow to vital organs such as the brain. This is achieved by manip-ulating the cardiac output (output of the heart), pe-ripheral resistance (changing the diameter of resis-tance vessels), and altering the amount of blood pooled in the veins. Three regulatory mechanisms are involved to achieve the objective: local mechanisms,neural mechanisms, and endocrine mechanisms.

The tissues are able to regulate, to some extent, their own blood flow. This capacity is referred to as au-toregulation. Autoregulation can be compared to the water supply to our houses. A pumping station pumps water to houses in a certain locality. However, individuals in each house are able to regulate the wa-ter according to their needs. Similarly, the heart pumps blood to the body, but each organ has the ca-pacity to regulate the blood flow to it according to its needs. For example, the vascular smooth muscles contract and reduce the caliber of the vessel auto-matically when they are stretched by increased blood flow. When a tissue becomes active, blood flow auto-matically increases. This is brought about by the ac-cumulation of “vasodilator substances.” Changes in pH, decreases in oxygen, and increases in carbon dioxide, temperature, potassium ions, and lactic acid, all outcomes of active metabolism, tend to relax the vascular smooth muscles and automatically increase blood flow. In injured tissue, release of histamine from damaged cells has the same effect.

By autoregulation, blood flow reduces in injured arteries and arterioles. This is because the arterioles constrict strongly, partly as a result of the liberation of the chemical serotonin from platelets and other vasoconstrictor substances by the endothelial cells. When cold, the smooth muscles of vessels in the skin contract and produce vasoconstriction as a result of direct stimulation by cold.

Other than regulating blood flow on a short-term basis, tissue has the capacity to increase or decrease the number and length of blood vessels according to long-term needs. New blood vessels may be formed (angiogenesis) or blood vessels that are already pres-ent may be remodeled (vascular remodeling). 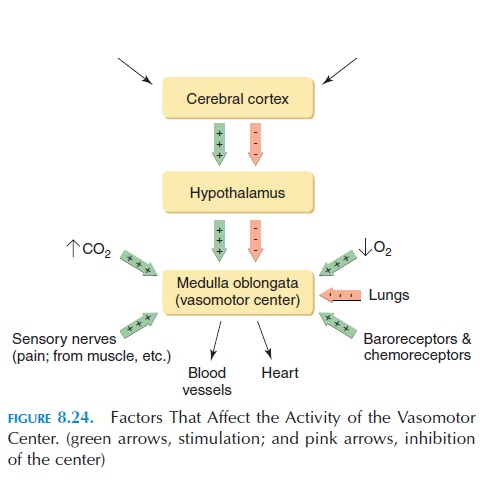 Neurons from the cerebral cortex have an effect on the center via the hypothalamus. These are responsi-ble for the increase in blood pressure and heart rate produced by emotions such as anger or sexual excite-ment. Inflation of the lungs results in vasodilatation. Oxygen and carbon dioxide levels in the blood have a direct effect on the activity of the center, and input from sensory nerves can affect the center as well. For example, pain sensations increase blood pressure, however, prolonged severe pain may cause vasodilata-tion and fainting. Another important factor that affects the vasomotor center is the input from barore- ceptors.

Afferent nerves from the carotid sinus and aortic arch baroreceptors reach the vasomotor center via the glossopharyngeal and vagus nerves. When the pres-sure in the arteries increases, the walls are stretched and these receptors are stimulated. The impulses are carried to the vasomotor center where they have an inhibitory effect. The decrease in the activity of the center results in vasodilatation, fall in blood pressure, and heart rate. The opposite happens when the blood pressure drops in the arteries. This baroreceptor re-flex is a powerful mechanism, which regulates the blood pressure from moment to moment.

The chemoreceptors  under respira-tory system) located in the carotid and aortic bodies have an effect on the cardiac center and vasomotor center, in addition to the respiratory center, resulting in vasoconstriction and bradycardia. However, this effect may be overridden by other regulatory mechanisms.

In addition to those previously mentioned, many other reflexes (beyond the scope of this book) affect blood pressure.

Many hormones in the circulation have an effect on blood pressure, volume, and flow. It is brought about by direct effect on the smooth muscles of blood ves-sels or on the kidney tubules.

Vasopressin or antidiuretic hormone secretedby the posterior pituitary gland also has a vasocon-strictor effect. As the names suggest, the hormone also reduces excretion of water in the kidneys, in-creasing the blood volume and blood pressure.

Another potent vasoconstrictor is angiotensin II. The hormone aldosterone, secreted by the adrenal cortex, helps increase blood volume by stimulating the kidneys to reabsorb water and sodium ions from the urine. In this way, both blood volume and blood pressure are maintained.

Atrial natriuretic peptide is another hormone se-creted by cardiac muscles in the walls of the right atrium. It is secreted when the walls of the atria are stretched excessively. This hormone reduces blood volume and blood pressure by increasing the excre-tion of water and sodium in the urine, reducing the activity of vasoconstrictor hormones and causing va-sodilatation.

In summary, the cardiovascular system is regulated by many mechanisms, some with short-term and oth-ers with long-term effects, some producing local and others producing generalized effects, all working to-ward the goal of meeting the needs of various tissues, without compromising blood flow to the vital organs. The regulatory mechanisms—local, neural, and en-docrine mechanisms—work in an integrated manner to maintain homeostasis. The various drugs used for treating hypertension act on one or more of these mechanisms.