Structure And Function of Blood Vessels In both the pulmonary and systemic circulation, blood flows through different kinds of blood vessels, each suited to its function.

STRUCTURE AND FUNCTION OF BLOOD VESSELS

In both the pulmonary and systemic circulation, blood flows through different kinds of blood vessels, each suited to its function (see Figure 8.17 and Table 8.4). The arteries conduct blood away from the heart to-ward the tissue. The large, elastic arteries divide and redivide into smaller midsized muscular arteries. The midsized arteries divide into smaller arteries. The smallest arteries are calledarterioles, the major func-tion of which is to regulate blood flow to the region. From the arterioles, the blood moves into capillarieswhere exchange between blood and tissue is possible. The capillaries join to form venules, and then veins, which return blood from capillaries to the heart. 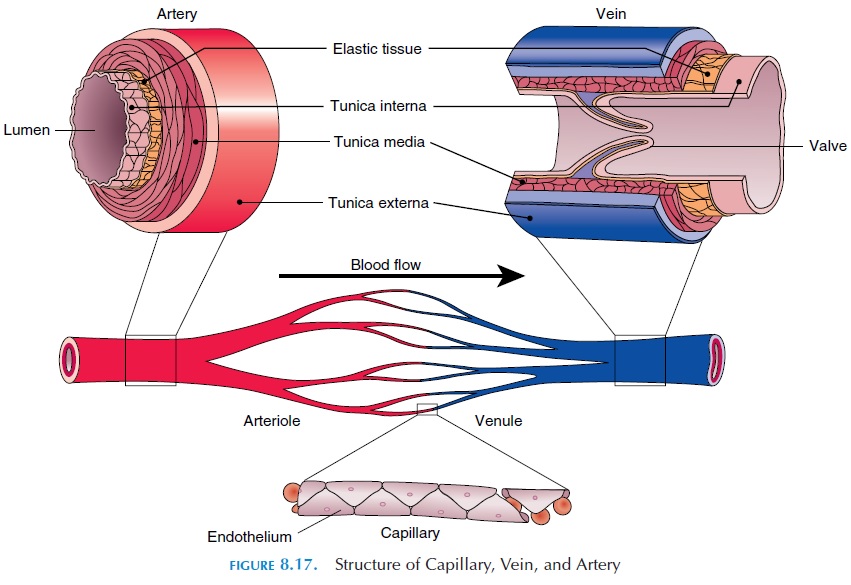 Artery and vein walls contain three layers: tunicainterna or tunica intima, tunica media, and tunica externa or tunica adventitia(Figure 8.17). Tunicainterna is the inner layer that comes in contact with blood. It consists of a smooth layer of simple squa-mous epithelium known as endothelium, with an underlying layer of connective tissue with elastic fibers. The tunica media has sheets of smooth muscle arranged as circular (and longitudinal in large arter-ies) layers around the lumen; it is the thickest layer in arteries. When the smooth muscle contracts, because of the organization of fibers, the diameter of the lu-men is narrowed and blood flow is reduced. On re-laxation, the opposite happens. A network of auto-nomic nerves located in the wall innervates the muscle fibers. The smooth muscle fibers respond to local changes in the environment, nerves, and circu-lating hormones. The tunica media also contains some elastic fibers that allow the blood vessel to stretch easily when the pressure of blood increases. 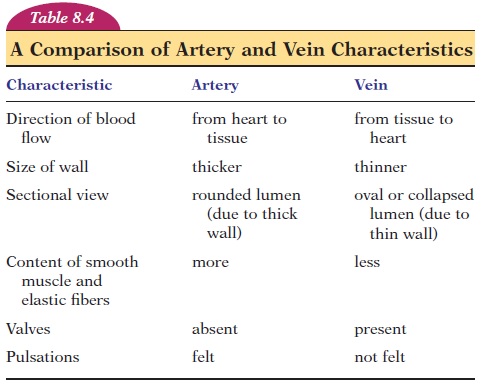 The walls of the arteries and veins give them strength to withstand the blood pressure. Because the pressure in veins is much less, the walls are thin-ner than that of arteries. The presence of muscle fibers allows for the caliber of lumen to change and, thereby, alter blood supply according to the needs of the region perfused. When the artery is narrowed or constricted, it is termed vasoconstriction.If the di-ameter of the lumen is increased by relaxation of smooth muscles, it is termed vasodilatation.

The elastic fibers allow the blood vessel to expand during systole and recoil during diastole. The dias-tolic recoil is important because it keeps the blood flowing, even in the relaxation phase of the heart.

Otherwise, blood flow to the organs would be in spurts. As a result of the thickness of the walls, diffu-sion cannot occur across arteries and veins and they serve only to conduct blood.

The arteries are further classified as elastic arter-ies, muscular arteries, and arterioles. Theelastic ar-teries or conducting arterieshave a high density ofelastic fibers that help them withstand the pressure changes that occur in the cardiac cycle. They also pro-vide the elastic recoil for maintaining diastolic pres-sure; therefore, by recoiling, they propel the blood for-ward when the ventricle is relaxing. These arteries are large, with a diameter of up to 2.5 cm (1 in).

Because their main function is to conduct blood to the muscu-lar arteries, they are also known as conducting ar-teries. The aorta, pulmonary trunk, and the largerbranches, such as the brachiocephalic, common carotid, subclavian, vertebral, and common iliac ar-teries, are of this type.

The muscular, midsized or distribution arteries are smaller, with a diameter of about 0.4 cm (.2 in). The tunica media of these arteries have more muscle. As a result of the greater muscle content, these arteries are capable of altering blood flow to the organs they supply by constricting or dilating. Hence, these arter-ies are known as distributing arteries. The arteries supplying the arm and leg (e.g., brachial artery, radial artery) are of this type.

The arterioles are about 30 µm (0.001 in) or less with a thick, muscular tunica media. They, along with the muscular arteries, are responsible for most of the resistance that opposes blood flow in the cir-culation and are known as resistance vessels.

Most tissues receive blood from more than one artery. The branches of the two or more arteries that supply the same tissue communicate with each other. This communication is known as anastomoses (sin-gular, anastomosis). As a result of the presence of anastomoses, when one of the arteries is obstructed, the blood supply to the tissue is not totally cut off be-cause the other artery(s) compensate. This alternate route of blood flow to the tissue is known as collateralcirculation to that tissue. Some tissue receives bloodfrom only one artery. These arteries are known as end arteries. When end arteries are obstructed, the tissueloses its blood supply and necrosis (cell death) ensues.