Only the major arteries relevant to bodyworkers are described.

Figure 8.21 is an overview of the systemic arteries. Only the major arteries relevant to bodyworkers are described. The large artery from the left ventricle is the aorta. It is the largest of arteries and begins at the aortic semilunar valve. The right and left coronaryarteries branch off just above the valve. The aortapasses superiorly for a short distance as the ascend-ing aorta and curves to form the arch of the aorta before it passes inferiorly as the descending aorta. 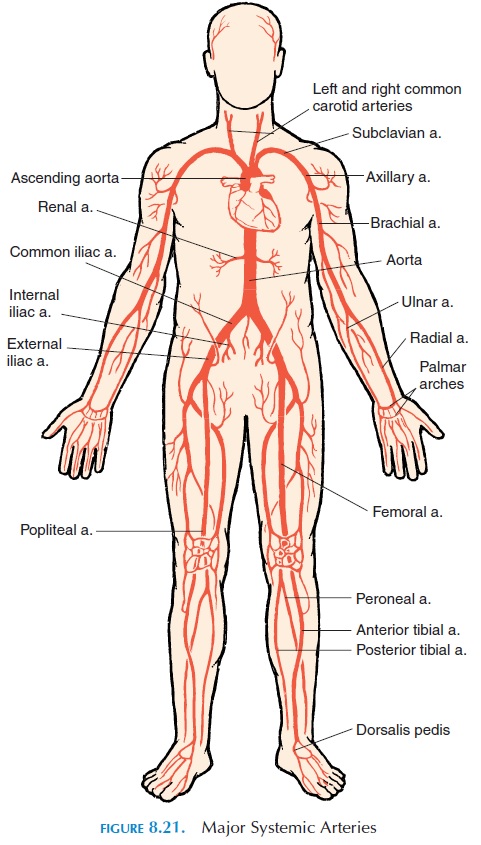 Three major branches leave the arch of the aorta. These are the brachiocephalic, the left commoncarotid, and the left subclavian arteries. The bra-chiocephalic artery, after ascending a short distance, forms two branches—the right subclavian and the right common carotid. The carotids supply thestructures in the head and neck, and the subclavian delivers blood to the arms, shoulders, chest wall, back, and to the central nervous system.

Arterial Supply to the Upper Limbs

The subclavian artery is known as the axillary artery, after it leaves the thoracic cavity and passes the su-perior border of the first rib. The axillary artery crosses the axilla and enters the arm, at which point it is referred to as the brachial artery. The brachial artery supplies the upper arm. At the antecubital fossa, it divides into the radial artery (which follows the radius) and the ulnar artery (which follows the ulna to the wrist).

The radial and ulnar arteries sup-ply the forearm. It is the radial artery that is palpated at the wrist to take the pulse. At the wrist, the arter-ies anastomose to form two arches—the deep and superficial palmar arches—from which branchessupply the hand, thumb, and fingers.

Arterial Supply to the Head and Face

Arterial Supply to the Brain

The internal carotids supply blood to the brain. The brain is also supplied by the vertebral arteries, which are branches of the subclavian arteries. The brain is extremely sensitive to changes in blood sup-ply. If the circulation to it is interrupted for several seconds, the person can become unconscious. Irre-versible brain damage can be produced if the supply is cut off for more than 4 minutes. The internal carotids and the vertebral arteries anastomose and form a circle around the brainstem inside the skull. This is known as the circle of Willis. The major branches from the circle are the anterior, middle, and posterior cerebral arteries. Most often, it is the middle cerebral artery affected in a person with stroke.

Arterial Supply to the Thorax

The arch of aorta becomes the descending aorta or thoracic aorta and descends to the left of the verte-bra along the posterior thoracic wall. It is located closer to the midline as it reaches the diaphragm. It then passes through the aortic hiatus of the di-aphragm and becomes the abdominal aorta. As the thoracic aorta descends, it gives off many branches to the viscera (visceral branches) and to the thoracic wall (parietal branches). The visceral branches sup-ply the bronchi, pericardium, esophagus, and other structures in the mediastinum.

Arterial Supply to the Abdomen and Pelvis

At about level T12, the thoracic aorta pierces the di-aphragm and becomes the abdominal aorta, which lies posterior to the peritoneal cavity. It divides into two major arteries at level L4—the right and leftcommon iliac arteries. The abdominal aorta deliversblood to the abdominopelvic organs and most of the major branches are unpaired and arise anteriorly and enter the mesentery. The major arteries are the celiacartery, which supplies blood to the stomach (left gas-tric branch), spleen (splenic branch), and liver (com-mon hepatic artery); the superior mesenteric artery, which supplies the pancreas, duodenum, small in-testines, and most of the large intestines; and the in-ferior mesenteric artery, which supplies blood to theterminal parts of the colon. Five paired arteries, the inferior phrenics, suprarenal, renal, gonadal, andlumbar arteries, also arise from here.

The left and right common iliac arteries carry blood to the pelvis and lower limbs. Each common il- iac artery divides into the internal and external iliacarteries at the level of the lumbosacral joint. The in-ternal iliac supplies the organs in the pelvic cavity, such as the uterus, urinary bladder, the external gen-italia, the internal and external walls of the pelvis, the medial side of thigh, and the vagina. The external il-iac arteries supply the lower limbs.

Arterial Supply to the Lower Limbs

The external iliac crosses the surface of the iliopsoas muscle and penetrates the abdominal wall midway between the anterior superior iliac spine and the pu- bic symphysis and emerges on the anteromedial sur-face of the thigh where it is called the femoral artery. The femoral artery continues inferiorly and posterior to the femur; at the popliteal fossa, it is called the popliteal artery. It divides here into the posterior and anterior tibial arteries. The posterior tibial gives rise to the peroneal artery. When the anterior tibial reaches the foot, it becomes the dorsalis pedisartery. The posterior tibial artery branches as itreaches the foot and forms the medial and lateralplantar arteries. Anastomoses connect the dorsalispedis artery with the plantar arteries to form two arches, the dorsal arch and the plantar arch.