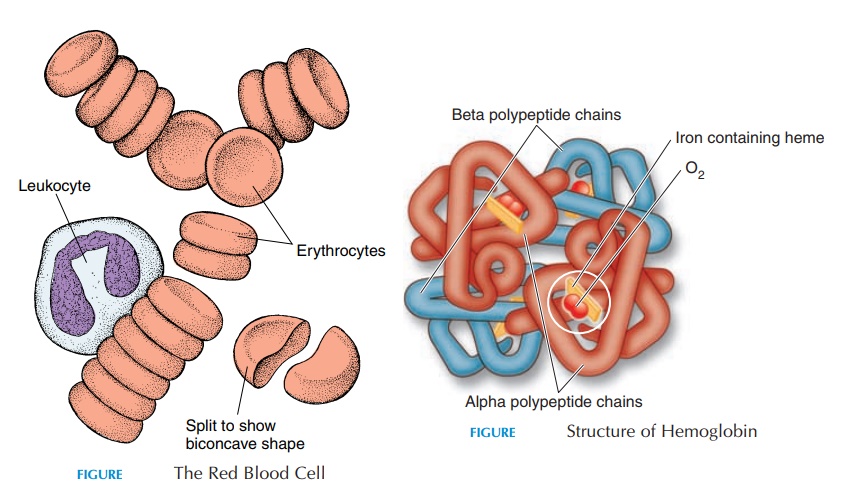 Red blood cells (see Figure 8.1), also known as erythrocytes, are packages that carry the oxygen-carrying protein pigment hemoglobin in the circulation. The red coloration is a result of the presence of hemoglobin. The red cells are biconcave and do not have a nucleus and other organelles. Hence, these cells cannot reproduce or perform complex meta-bolic activities as other typical cells. Under the mi-croscope, they look like doughnuts because the cen-tral portion of the disk is indented. This shape and small size enables them to squeeze single file through the smallest blood vessels. The biconcave shape also allows the cell to swell without rupturing, if the sur-rounding environment becomes hypotonic. 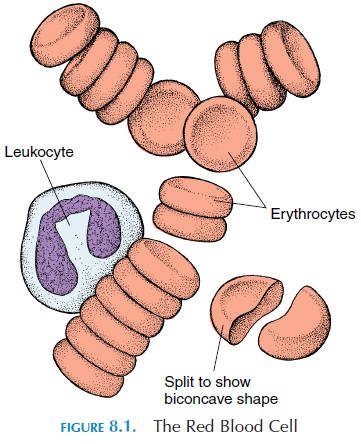 The red blood cells are formed in the bone marrow, ac-cording to the needs of the body. The process of red cell formation is known as erythropoiesis. The kidneys monitor the blood and secrete a hormone called erythropoietin when the oxygen levels in the blooddecrease below normal. Erythropoietin stimulates the marrow cells that manufacture red cells. Other than erythropoietin, many other factorssuch as protein, iron, folic acid, and vitamin B12 are re-quired for forming red cells and their hemoglobin con-tent. Certain hormones, such as growth hormone, thy-roxine, estrogen, and androgen, are also required.

The site of blood cell formation varies from age to age. In the fetus, the cells are formed in the liver and spleen. In children, the cells are formed in the mar-row cavities of all bones. By age 20, the blood cells are manufactured in the upper end of the humerus and femur and in flat bones such as the sternum, pelvis, and vertebra. In emergencies, however, other areas may revert to forming red cells. The marrow that is actively producing blood cells is red. Inactive bone marrow is infiltrated with fat and appears yellow.

Hemoglobin (see Figure 8.2) is the most important component of red blood cells, and it has a great affinity for oxygen. Each hemoglobin molecule is a protein pig-ment that has a heme portion and a globin portion. The heme portion contains four iron ions in ferrous form to which oxygen becomes attached. The globin portion consists of four peptide chains (2 alpha and 2 beta polypeptide chains), the structure of which deter-mines the property of hemoglobin (also see box He-moglobin Abnormalities) Hemoglobin helps trans-port oxygen as well as carbon dioxide. In addition, it is a buffer, preventing rapid changes in the blood pH. 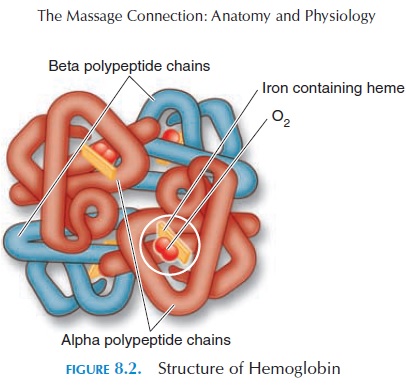 A normal red cell in circulation lasts for about 120 days. As the cells age, they become more fragile and are destroyed and removed by phagocytic cells as they squeeze through the network of capillaries in the spleen, liver, and bone marrow.

When the red cells are broken down, some of the contents, such as iron and protein, are recycled. Globin is broken down into amino acids that can be reused to form new proteins. The iron from the heme is removed and transported by a protein in the plasma known as transferrin. The iron detaches from transferrin onreaching tissue such as the liver, muscle cells, and spleen and become attached to iron storage proteins ferritin and hemosiderin. When needed, the iron isreleased from the storage proteins and transported in the blood to the bone marrow, where new red blood cells are formed.

The heme portion, without iron, is converted to a greenish-yellow pigment (biliverdin) and a yellow-orange pigment (bilirubin). The excessive produc-tion of bilirubin is responsible for the yellowish dis-coloration in jaundice.

The Fate of Bilirubin

Bilirubin is carried in the blood from the macrophages in the spleen, liver, or red bone marrow to the liver, where it enters the liver cells and is converted into an-other form of bilirubin—conjugated bilirubin. Con-jugated bilirubin is secreted by the liver cells into bile. (Bile is the yellow secretion formed by the liver, stored in the gall bladder, and secreted into the intestines when fat needs to be digested). As part of bile, biliru-bin reaches the large intestine where it is converted by the bacteria in the intestine tourobilinogen. Some urobilinogen is reabsorbed into the blood and con-verted to the yellowish pigment urobilin. Urobilin is then excreted from the body in urine. The rest of the urobilinogen is excreted in the feces in the form of a brown pigment known as stercobilin. It is stercobilin that gives feces the characteristic color. 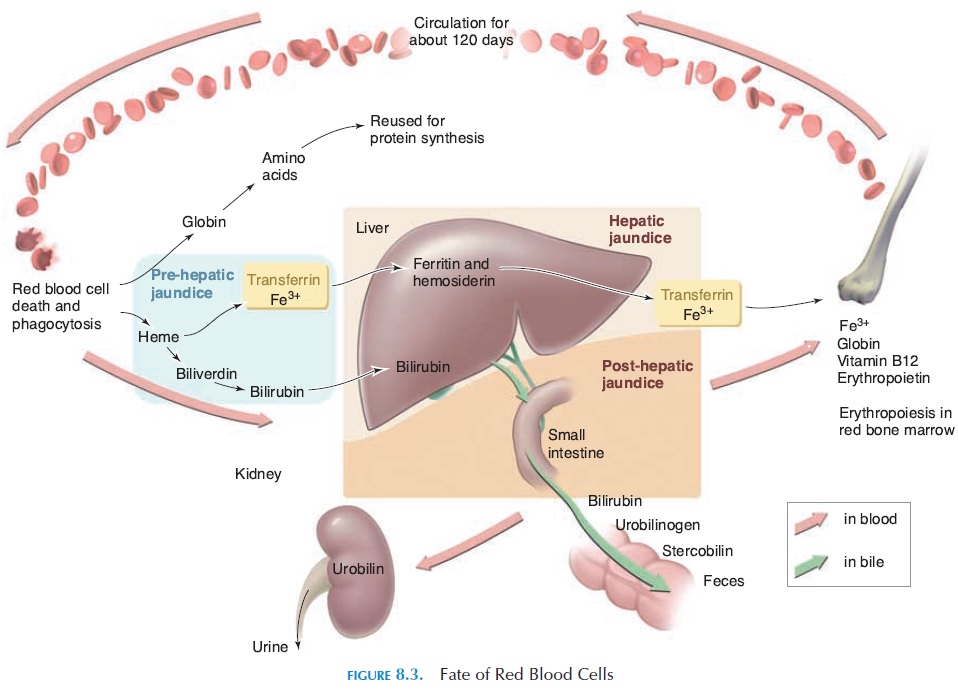 As can be observed, bilirubin is transported to many regions before it is excreted (see Figure 8.3). From the macrophages in the spleen, it goes via the blood to the liver; as part of bile to the gallbladder, bile ducts, and intestines. Any problems along this route can result in excessive blood levels of bilirubin. When the levels of bilirubin increase in the blood, it spills over into connective tissue and the skin, mu-cous membrane, and white of the eye (sclera), pro-ducing a yellow discoloration. This yellow discol-oration is called jaundice or icterus.

In summary, jaundice can result from increased red cell destruction by the macrophages in the spleen, liver, and bone marrow (prehepatic jaundice), as a result of liver disease (e.g., viral hepatitis [hepaticjaundice]), or as a result of bile duct blockage (post-hepatic jaundice). As you may have realized, not allconditions producing jaundice are infective.