If a person exercises, cell metabolism and oxygen requirement increases. This implies that blood flow to the active tissue has to increase. Increase in blood flow is, in turn, caused by an increase in cardiac output.

If a person exercises, cell metabolism and oxygen requirement increases. This implies that blood flow to the active tissue has to increase. Increase in blood flow is, in turn, caused by an increase in cardiac output. When the tissue is inactive, oxygen demands de-crease, and it would be efficient for the body to de-crease cardiac output in such situations. Therefore, it is important for the body to alter the cardiac output according to needs to maintain homeostasis. 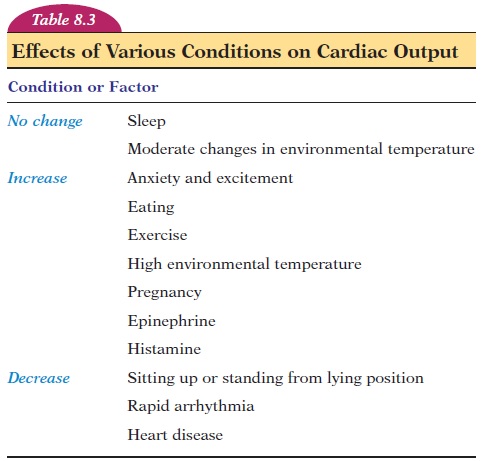 Adrenaline and noradrenaline (from the adrenal medulla) in the blood have the same effect as sympa-thetic stimulation. The parasympathetic innervation of the heart slows down the heart rate. The vagus nerve carries parasympathetic fibers to the heart.

The stroke volume of the heart is affected by (A) the degree of stretch of muscle fibers before it con-tracts (preload), (B) the force of contraction of indi-vidual fibers (contractility), and (C) the resistance that needs to be overcome to eject the blood out of the ventricles (afterload) (e.g., pressure in the aorta).

The initial length of the cardiac muscle fibers also has an effect on the force of contraction. When the ventricles are filled with more blood, the muscle fibers are stretched so that there is maximal overlap of actin and myosin fibers, increasing the strength of contraction. Therefore, when more venous blood returns to the heart, the force of cardiac muscle contraction is automatically increased. During exer-cise, for example, there is dilation of blood vessels in the skeletal muscles, with resultant reduction in pe-ripheral resistance and increased flow of blood back to the heart via veins. This relationship between the end diastolic volume and force of contraction during sys-tole is known as the Frank-Starling law of the heart.

The force of contraction of individual fibers (con-tractility) can be increased by various agents that fa-cilitate entry of calcium into the myocardial fibers. Stimulation of sympathetic nerves to the heart, pres-ence of adrenaline, noradrenaline in the blood, and increased calcium levels in the blood are some fac-tors that increase contractility.

Contractility is decreased by parasympathetic stimulation, inhibition of sympathetic activity, in-creased potassium levels in the blood, acidosis, and presence of drugs that decrease calcium into the my-ocardial fibers, among others.