Many cyclical or sequential events occur in the heart between the beginning of one heartbeat and the next.

Many cyclical or sequential events occur in the heart between the beginning of one heartbeat and the next. All events that occur associated with one heartbeat are known as the cardiac cycle (see Figure 8.15). During the cycle, each heart chamber contracts and relaxes. The period of contraction is known as sys-tole, and the period of relaxation is known as dias-tole. At a heart rate of 75 beats/minute, the durationof each cardiac cycle is about 800 milliseconds, with systole lasting for about 270 milliseconds and dias-tole for about 530 milliseconds. When the heart rate increases, the duration of diastole is shortened more than the systole. This results in the reduction of time available for ventricular filling (occurring when the ventricle relaxes). If the heart rate is unusually fast, there is too little time for the ventricles to fill and lit-tle blood is pushed into the large arteries. The person becomes unconscious as a result of reduced blood flow to the brain. 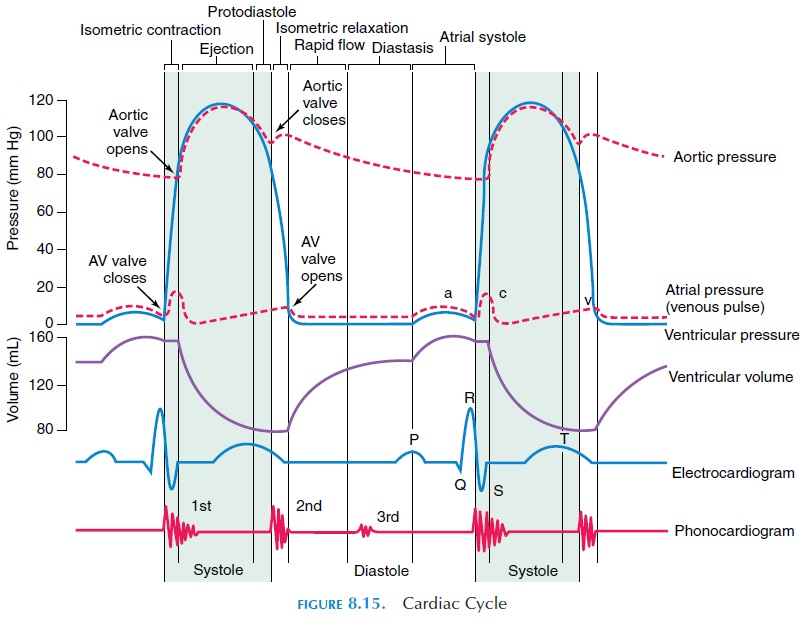 During systole or contraction phase, the blood in-side the chamber is ejected out and, during diastole or relaxation phase, the chamber gets filled with blood and the cycle continues. The right direction of blood flow is determined by the presence of valves and difference in pressure between the chambers.

For proper flow, the sequence of contraction of the atria and ventricle has to be precise, with the atria contracting just before the ventricles for blood to flow from the atria into the ventricles. The presence of the conducting system and the difference in rate of impulse conduction through them ensures that atrial and ventricular muscles contract at different times.

Blood flows into the atria via the superior and infe-rior vena cavas during atrial diastole. The atrial dias-tole lasts for about 700 milliseconds. When the SA node produces an action potential, the atria contract (atrial systole). Because the impulse takes time to reach the ventricular muscles, the ventricles are re-laxed at this time, and the AV valves are open and blood from the atria enter the ventricle easily.

When the impulse reaches the ventricles, they contract (ventricular systole). The pressure in the ventricles rises above that of the pulmonary trunk and aorta, and the semilunar valves that were closed during the dias-tole of the ventricle are pushed open and blood is ejected into the blood vessels. At the same time, the AV valves are pushed close (Figure 8.9). This is primarily responsible for the first heart sound or the “lubb” heard when using the stethoscope or placing the ear or hand on the chest wall superficial to the heart.

The muscles begin to relax after about 270 millisec-onds (i.e., when the heart rate is 75 beats/minute). When the ventricles relax, the volume increases and the pressure decreases. When the pressure drops be-low that of the pulmonary trunk and aorta, the semi-lunar valves (Figure 8.9) close with a snap. This is re-sponsible for the second heart sound or the “dubb” sound. Because the pressure is less than that of the atria, the AV valves open and blood flows in.