The superior vena cava receives blood from the tissue and organs of the head, neck, chest, shoulders, and upper limb. Inside the skull, the smaller veins drain into large vessels known as sinus.

Drainage From the Brain, Head, and Neck

Figure 8.22 is an overview of the major veins. The superior vena cava receives blood from the tissue and organs of the head, neck, chest, shoulders, and upper limb. Inside the skull, the smaller veins drain into large vessels known as sinus. The venous sinus con-verge and ultimately leave the skull as the internaljugular vein. The internal jugular vein descends par-allel to the common carotid artery in the neck. Poste-riorly, the skull is drained by the vertebral veins that leave the skull and descend within the foramen in the transverse processes of the cervical vertebrae. 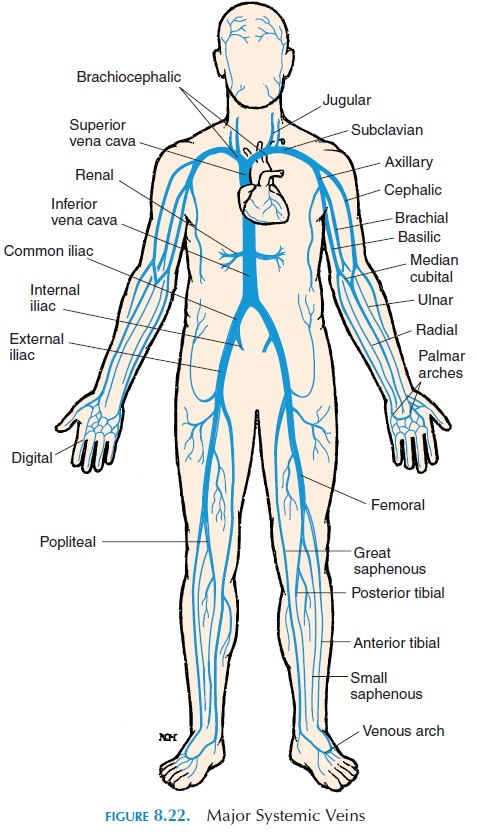 From regions outside the skull and neck, the veins of the head drain into the external jugular vein,which lies just beneath the skin, on the anterior sur-face of the sternocleidomastoid muscle.

Drainage From the Upper Limbs

The superficial veins empty into the cephalic vein, which ascends along the radial side of the forearm, the median antebrachial vein, and the basilic vein, which ascends on the ulnar side. The basilic vein as-cends in the upper arm, medial to the biceps brachii muscle. Anterior to the elbow, the superficial mediancubital vein passes medially and obliquely from thecephalic to the basilic vein. Usually, blood is collected for examination or donation from the median cubital vein.

The deep veins are positioned parallel to the arter-ies and carry the same names. The deep palmarveins drain into the radial vein and ulnar vein. Af-ter crossing the elbow, these veins fuse to form the brachial vein. The brachial vein, on entering the ax-illa, is called the axillary vein. The superficial basilic vein joins the brachial vein near the axilla.

Drainage From the Lower Limbs

The lower limbs and abdomen are drained by the in-ferior vena cava. In the foot, the capillaries in the sole of each foot form plantar veins that join to form the plantarvenous arch. Similar to the upper limb, there are two sets of veins—superficial and deep. The deep veins lie parallel to the arteries and are called by the same names as the arteries. The anterior tibial vein, the posterior tibial vein, and the peroneal veins join at the popliteal fossa to form the popliteal vein. On reaching the femur, the popliteal vein is referred to as the femoral vein. The femoral vein penetrates the ab-dominal wall and becomes the external iliac vein.

The surface anatomy of the superficial veins is im-portant, as it is a common site for varicosities. Some of the capillaries of the foot join on the superior surface of the foot to form the dorsal venous arch. Two su-perficial veins are formed from the dorsal venous arch—the great saphenous vein and the small saphe-nous vein. The great saphenous vein ascends along the medial aspect of the leg and thigh and drains into the femoral vein near the inguinal region. The small saphe-nous vein arises from the dorsal venous arch and as-cends along the posterior and lateral aspect of the calf where it drains into the popliteal vein.

Drainage From the Pelvis and Abdomen 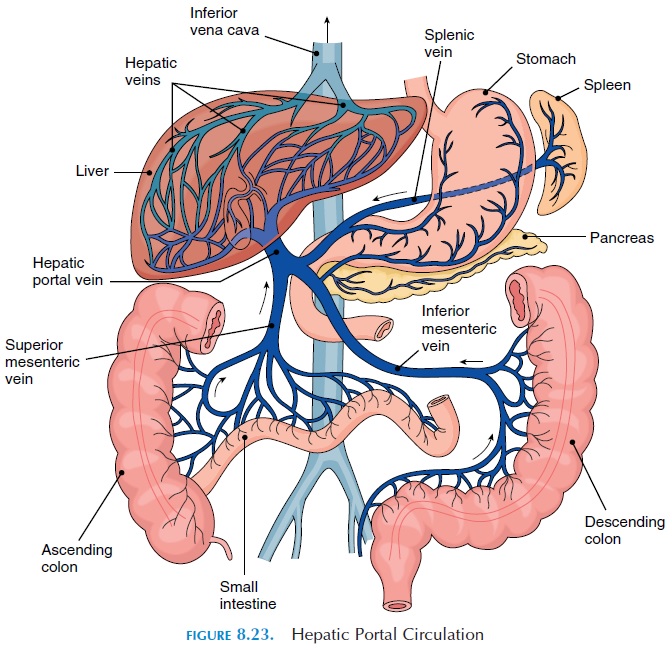