Capillaries are the only vessels that allow exchange across their walls, and they are known as exchange vessels.

Capillaries are the only vessels that allow exchange across their walls, and they are known as exchange vessels. They are as small as the diameter of a redblood cell (RBC) and often the RBCs travel single file as they squeeze through the capillaries. The thinness of wall, extensive surface area, and slow movement of blood through them allows exchange to take place easily and efficiently. Because these are microscopic vessels, the flow of blood through them is known asmicrocirculation. 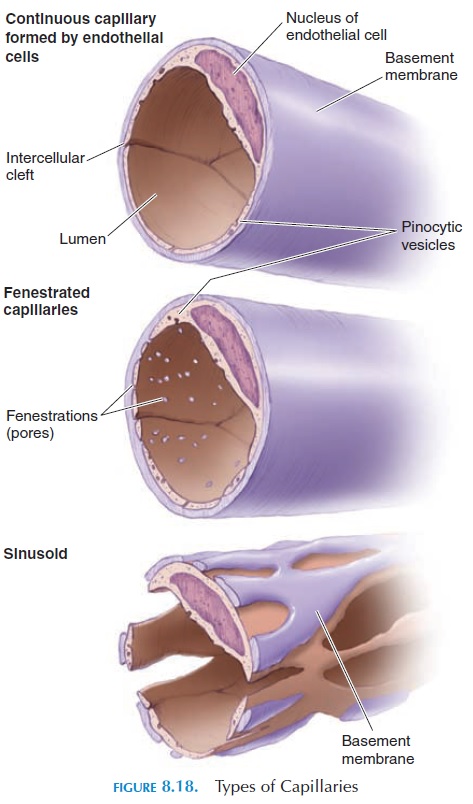 The capillary (see Figure 8.18) is lined by endothe-lium attached to a basement membrane. It does not have tunica media or externa. Most capillaries have a complete endothelial lining with small gaps between the cells. These are known as continuous capillaries. Continuous capillaries are found in skeletal muscle, smooth muscle, connective tissues, and lungs. Other capillaries have pores in the plasma membrane of the endothelial cells that permit rapid exchange of water and larger solutes(fenestrated capillaries). Such cap-illaries are found in the glomeruli of the kidneys, en-docrine glands, and villi of the small intestine. In cer-tain areas, such as the liver, spleen, and bone marrow, the capillaries have large pores between the endothelial cells. They are so large that they even allow plasma pro-tein to pass through. Such capillaries are known as si-nusoidal capillaries or sinusoids. The presence of si-nusoidal capillaries in the bone marrow allows the cells manufactured here to get into the blood.

The network of capillaries varies from region to re-gion in accordance to the metabolic activity of the tis-sue they supply. Tissue such as the kidney, liver, mus-cles, and nervous tissue have an extensive network as a result of their high metabolic rate. When the activity of the tissue is diminished, the blood flow is restricted to only a few channels of the capillary network. When the tissue is active, the entire network fills with blood.

The structural arrangement of the capillary bed en-ables rapid changes in blood flow. From the arteriole, a metarteriole emerges to supply 10–100 capillaries.Contracting or relaxing the smooth muscle fibers that surround the proximal end of the metarteriole regu-lates blood flow to these capillaries. The distal end of the metarteriole opens into a venule known as a thor-oughfare channel. When oxygen requirement is low,blood goes directly from the metarteriole into the thor-oughfare channel without going into the capillaries. Each capillary that branches from the metarteriole has a circle of smooth muscle known as the precapillarysphincter (see Figure 8.19). Contraction of this sphinc-ter can reduce or cut off blood flow through that capil-lary. The precapillary sphincter is particularly sensitive to chemicals in the interstitial fluid around it. For ex-ample, if oxygen levels drop and waste products accu-mulate, they relax, increasing the blood flow. 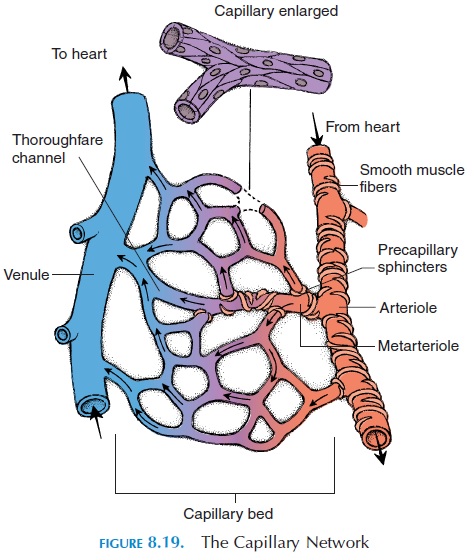 Each capillary network may receive blood from more than one artery. This ensures that even if one artery is blocked, the tissue is not totally deprived of nutrients. Only about 25% of capillaries have blood flowing through them at rest. More capillaries are opened when the metabolic needs of the tissue are in-creased.

The primary function of the cardiovascular system is to ensure that blood reaches the capillaries where ex-change of nutrients and waste products occur. Re-member that exchange can occur only in the capil-laries and all other vessels serve to conduct blood to and remove blood from the capillaries. Many physi-cal factors determine the rate of exchange and the di-rection of movement. Diffusion, vesicular transport, osmosis, and filtration are the primary factors that affect exchange.

Substances that can move easily across the capillary endothelium (directly through the plasma membrane, through the gaps in or between the endothelium) do so bydiffusion. Oxygen, carbon dioxide, glucose, amino acids, and steroid hormones are examples of substances that move by diffusion. Lipid-soluble sub-stances, such as oxygen, carbon dioxide, and steroidal hormones, diffuse through the plasma membrane. Water-soluble substances, such as glucose and amino acids, pass through gaps in the cells and between the cells. The direction of movement is determined by the concentration gradient. For example, oxygen and glu-cose that are of a higher concentration inside the cap-illaries move out while carbon dioxide and other waste products that are of a higher concentration in the cells move into the capillaries. If the gaps between the cap-illary endothelial cells are large, even plasma proteins move out of the capillaries.

Large, lipid-insoluble substances may be trans-ported by vesicular transport. Here, the plasma membrane of the endothelial cells facing the blood indents to engulf the substance and form a vesicle (endocytosis). The vesicle is transported across the cytoplasm to the other side of the cell where it fuses with the plasma membrane to be ex-truded into the interstitial compartment (exocytosis).

Movement of Fluid Across the Capillaries

The interstitial hydrostatic pressure tends to push the fluid back into the capillaries. This is the pressure of fluid between the cells. Normally, there is little fluid in the tissue spaces as they are removed by the lymphatic vessels. In the body, this pressure is negligible—about 0 mm Hg.

The blood colloid osmotic pressure is opposed by the interstitial fluid osmotic pressure. This force is a result of the large particles present in the intersti-tial compartment. The force tends to move the fluid out of the capillaries into the interstitial compart-ment. There are few particles, such as proteins, pres-ent in this compartment as they are removed quickly by the lymphatic capillaries. This force is, therefore, very small, only about 0.1–5 mm Hg. (see Figure 8.20). 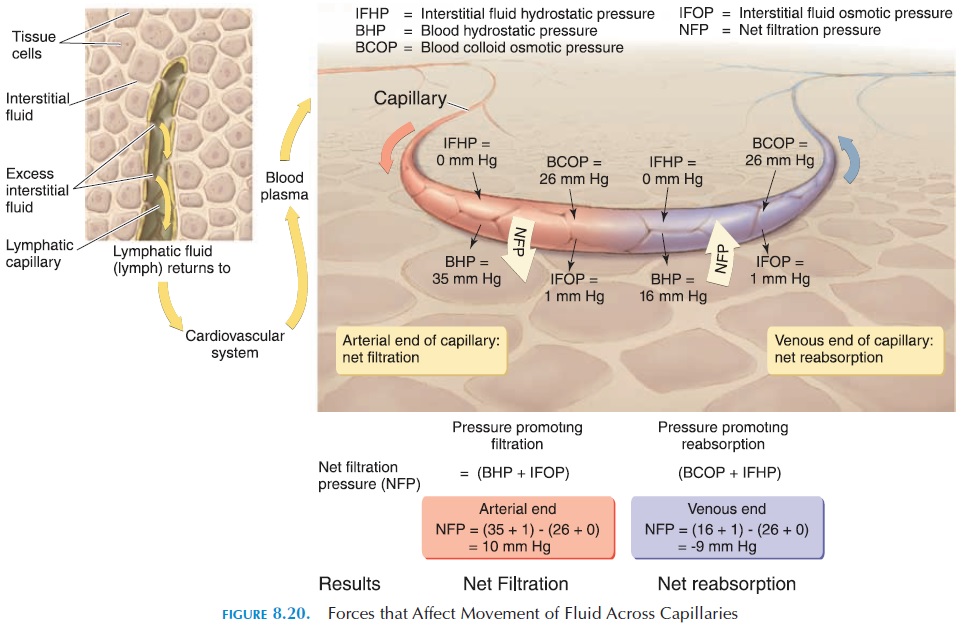