The vagina is protected against infection by its normally low pH (3.5 to 4.5), which is maintained in part by the actions of Lactobacillus acidophilus, the dominant bacteria in a healthy vaginal ecosystem.

The vagina is protected against infection by its normally low pH (3.5 to 4.5), which is maintained in part by the actions of Lactobacillus acidophilus, the dominant bacteria in a healthy vaginal ecosystem. These bacteria suppress the growth of anaerobes and produce lactic acid, which maintains normal pH. They also produce hydrogen peroxide, which is toxic to anaerobes. The risk of infection rises if a woman’s resistance is reduced by stress or illness, if the pH is altered, or if a pathogen is introduced.

Vulvovaginal infections are common problems, and nurses have an important role in providing information that may prevent theiroccurrence. To prevent these infections, women need to understand their own anatomy and vulvovaginal hygiene measures. In addition, continued research into causes and treatments is needed, along with better ways to encourage growth of lactobacilli.

The epithelium of the vagina is highly responsive to estrogen, which induces glycogen formation. The subsequent breakdown of glycogen into lactic acid assists in producing a low vaginal pH.When estrogen decreases during lactation and menopause, glycogen also decreases. With reduced glycogen formation, infections may occur. In addition, as estrogen production ceases during the perimenopausal and postmenopausal periods, the vagina and labia may atrophy (thin), making the vaginal area more susceptible to infection. When patients are treated with antibiotics, the norma vaginal flora are reduced. This results in altered pH and growth of fungal organisms. Other factors that may initiate infections include sexual intercourse with an infected partner and wearing tight, nonabsorbent, and heat-retaining clothing (Chart 47-1). 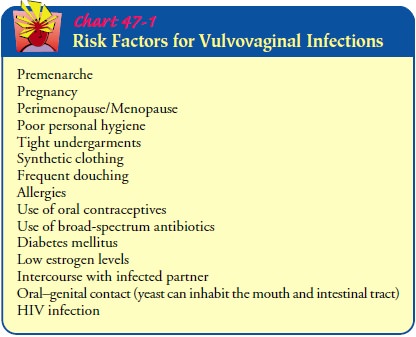 Vaginitis (inflammation of the vagina) occurs when Candida or Trichomonas species or other bacteria invade the vagina. The normal vaginal discharge, which may occur in slight amounts during ovulation or just before the onset of menstruation, becomes more profuse when vaginitis occurs. Urethritis may accompany vaginitis because of the proximity of the urethra to the vagina.

Dis-charge that occurs with vaginitis may produce itching, odor, red-ness, burning, or edema, which may be aggravated by voiding and defecation. After the causative organism has been identified, ap-propriate treatment (discussed later) is prescribed. This may in-clude oral medication or local medication that may be inserted into the vagina using an applicator.