Cancer of the Cervix

Carcinoma of the cervix is predominantly squamous cell cancer (10% are adenocarcinomas).

CANCER OF THE CERVIX

Carcinoma of the cervix is predominantly squamous cell cancer (10% are adenocarcinomas). During the past 20 years, the inci-dence of invasive cervical cancer has decreased from 14.2 cases per 100,000 women to 7.8 cases per 100,000 women. It is less com-mon than it once was because of early detection of cell changes by Pap smear. However, it is still the third most common female reproductive cancer and affects about 13,000 women in the United States every year (American Cancer Society, 2002). Cervical cancer occurs most commonly in women ages 30 to 45, but it can occur as early as age 18. Risk factors include multiple sex partners, early age at first coitus, short interval between menarche and first coitus, sexual contact with men whose partners have had cervical cancer, exposure to the HPV virus, and smoking (Chart 47-6). 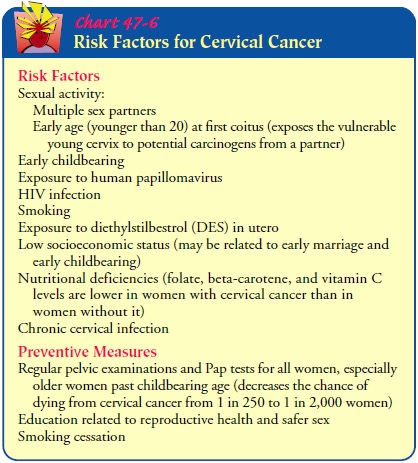 There are several different types of cervical cancer. Most cancers originate in squamous cells, while the remainder are adenocarci-nomas or mixed adenosquamous carcinomas. Adenocarcinomas begin in mucus-producing glands and are often due to HPV in-fection. Most cervical cancers, if not detected and treated, spread to regional pelvic lymph nodes, and local recurrence is not un-common. Early cervical cancer rarely produces symptoms. If symptoms are present, they may go unnoticed as a thin watery vaginal discharge often noticed after intercourse or douching. When symptoms such as discharge, irregular bleeding, or bleed-ing after sexual intercourse occur, the disease may be advanced. Advanced disease should not occur if all women have access to gy-necologic care and avail themselves of it. The nurse’s role in access and utilization is crucial and may prevent the delay of detection of cervical cancer until the advanced stage.

In advanced cervical cancer, the vaginal discharge gradually increases and becomes watery and, finally, dark and foul-smelling from necrosis and infection of the tumor. The bleeding, which occurs at irregular intervals between periods (metrorrhagia) or after menopause, may be slight (just enough to spot the undergarments) and occurs usually after mild trauma or pressure (eg, intercourse, douching, or bearing down during defecation).

As the disease con-tinues, the bleeding may persist and increase. Leg pain, dysuria, rec-tal bleeding, and edema of extremities signal advanced disease.

As the cancer advances, it may invade the tissues outside the cervix, including the lymph glands anterior to the sacrum. In one third of patients with invasive cervical cancer, the disease involves the fundus. The nerves in this region may be affected, producing excruciating pain in the back and the legs that is relieved only by large doses of opioid analgesic agents. If the disease progresses, it often produces extreme emaciation and anemia, usually accom-panied by fever due to secondary infection and abscesses in the ulcerating mass, and by fistula formation. Because the survival rate for in situ cancer is 100% and the rate for women with more advanced stages of cervical cancer decreases dramatically, early de-tection is essential.

Diagnosis may be made on the basis of abnormal Pap smear re-sults, followed by biopsy results identifying severe dysplasia (cer-vical intraepithelial neoplasia type III [CIN III], high-grade squamous intraepithelial lesions [HGSIL] [also referred to as HSIL], or carcinoma in situ; see below). HPV infections are usu-ally implicated in these conditions. Biopsy results may indicate carcinoma in situ. Carcinoma in situ is technically classified as se-vere dysplasia and is defined as cancer that has extended through the full thickness of the epithelium of the cervix, but not beyond. This is often referred to as preinvasive cancer.

In its very early stages, invasive cervical cancer is found mi-croscopically by Pap smear. In later stages, pelvic examination may reveal a large, reddish growth or a deep, ulcerating lesion. The patient may report spotting or bloody discharge.

When the patient has been diagnosed with invasive cervical cancer, clinical staging estimates the extent of the disease so that treatment can be planned more specifically and prognosis reasonably predicted. The International Classification adopted by the International Federation of Gynecology and Obstetrics and included in the NIH Consensus Conference on Cervical Cancer (1996) (Table 47-2) is the most widely used staging system; the TNM (tumor, nodes, and metastases) classification is also used in describing cancer stages. In this system, T refers to the extent of the primary tumor, N to lymph node involvement, and M to metastasis, or spread of the disease. 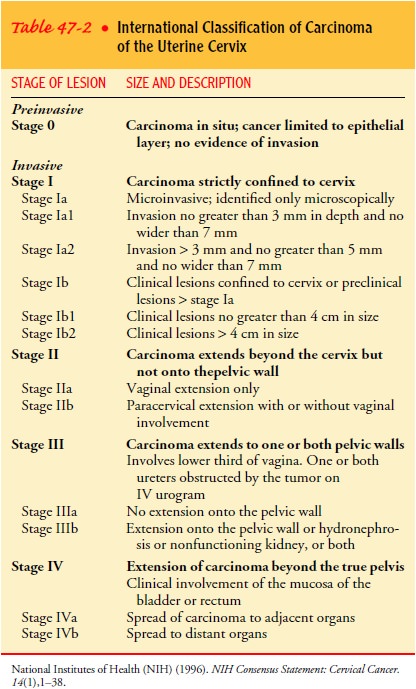 Signs and symptoms are evaluated, and x-rays, laboratory tests, and special examinations, such as punch biopsy and col-poscopy, are performed. Depending on the stage of the cancer, other tests and procedures may be performed to determine the ex-tent of disease and appropriate treatment. These tests include dilation and curettage (D & C), computed tomography (CT) scan, magnetic resonance imaging (MRI), intravenous urogra-phy, cystography, and barium x-ray studies.

When precursor lesions, such as low-grade squamous intra-epithelial lesion (LGSIL), which is also referred to as LSIL (CIN I and II or mild to moderate dysplasia), are found by colposcopy and biopsy, careful monitoring by frequent Pap smears or con-servative treatment is possible.

Conservative treatment may con-sist of monitoring, cryotherapy (freezing with nitrous oxide), or laser therapy. A loop electrocautery excision procedure (LEEP) may also be used to remove abnormal cells. In this procedure, a thin wire loop with laser is used to cut away a thin layer of cer-vical tissue. LEEP is an outpatient procedure usually performed in a gynecologist’s office; it takes only a few minutes. Analgesia is given before the procedure, and a local anesthetic agent is injected into the area. This procedure allows the pathologist to examine the removed tissue sample to determine if the borders of the tissue are disease-free. Another procedure called a cone biopsy or conization (removing a cone-shaped portion of the cervix) is per-formed when biopsy findings demonstrate CIN III or HGSIL, equivalent to severe dysplasia and carcinoma in situ.

A newly developed procedure called a radical trachelectomy is an alternative to hysterectomy in women with cervical cancer who are young and want to have children (Dargent, Martin, Sacchetoni & Mathevet, 2000). In this procedure the cervix is gripped with retractors and pulled into the vagina until it is visi-ble. The affected tissue is excised while the rest of the cervix and uterus remain intact. A drawstring suture is placed to close the cervix.

Patients who have precursor or premalignant lesions need re-assurance that they do not have invasive cancer. However, the im-portance of close follow-up is emphasized because the condition, if untreated for a long time, may progress to cancer. Patients with cervical cancer in situ also need to know that this is usually a slow-growing and nonaggressive type of cancer that is not expected to recur after appropriate treatment.

Treatment of invasive cervical cancer depends on the stage of the lesion, the patient’s age and general health, and the judgment and experience of the physician. Surgery and radiation treatment (intra-cavitary and external) are most often used. When tumor invasion is less than 3 mm, a hysterectomy is often sufficient. Invasion ex-ceeding 3 mm usually requires a radical hysterectomy with pelvic node dissection and aortic node assessment. Stage 1B1 tumors are treated with radical hysterectomy and radiation. Stage 1B2 tu-mors are treated individually because no single correct course has been determined, and many variable options may be seen clini-cally (Chart 47-7). Frequent follow-up after surgery by a gyne-cologic oncologist is imperative because the risk of recurrence is 35% after treatment for invasive cervical cancer. Recurrence usu-ally occurs within the first 2 years. Recurrences are often in the upper quarter of the vagina, and ureteral obstruction may be a sign. Weight loss, leg edema, and pelvic pain may be signs of lym-phatic obstruction and metastasis. 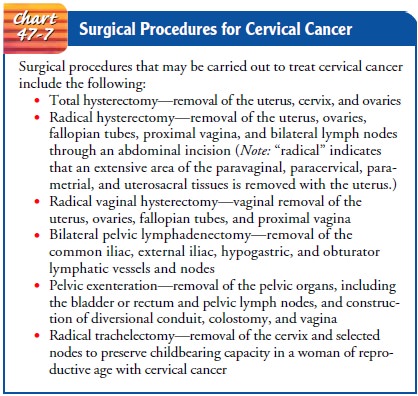 Radiation, which is often part of treatment to reduce recurrent disease, may be delivered by an external beam or by brachyther-apy (method by which the radiation source is placed near thetumor) or both. The field to be irradiated and dose of radiation are determined by stage, volume of tumor, and lymph node in-volvement. Treatment can be administered daily for 4 to 6 weeks followed by one or two treatments of intracavitary radiation. Inter-stitial therapy may be used when vaginal placement has become impossible due to tumor or stricture.

Platinum-based agents are being used to treat advanced cervi-cal cancer. They are often used in combination with radiation therapy, surgery, or both. Studies are ongoing to find the best ap-proach to treat advanced cervical cancer. Vaginal stenosis is a fre-quent side effect of radiation. Sexual activity with lubrication is preventive, as is use of a vaginal dilator to avoid severe permanent vaginal stenosis.

Some patients with recurrences of cervical cancer are consid-ered for pelvic exenteration, in which a large portion of the pelvic contents is removed. Unilateral leg edema, sciatica, and ureteral obstruction indicate likely disease progression. Patients with these symptoms have advanced disease and are not consid-ered candidates for this major surgical procedure. Surgery is often complex because it is performed close to the bowel, blad-der, ureters, and great vessels. Complications can be considerable and include pulmonary emboli, pulmonary edema, myocardial infarction, cerebrovascular accident, hemorrhage, sepsis, small bowel obstruction, fistula formation, urinary obstruction of ileal conduit, bladder dysfunction, and pyelonephritis, most often in the first 18 months. Vein constriction must be avoided post-operatively. Patients with varicose veins or a history of throm-boembolic disease may be treated prophylactically with heparin. Pneumatic compression stockings are prescribed to reduce the risk for deep vein thrombosis. Nursing care of these patients is complex and requires coordination and care by experienced health care professionals. This is a complex, extensive surgical procedure that is reserved for those with a high likelihood of cure.