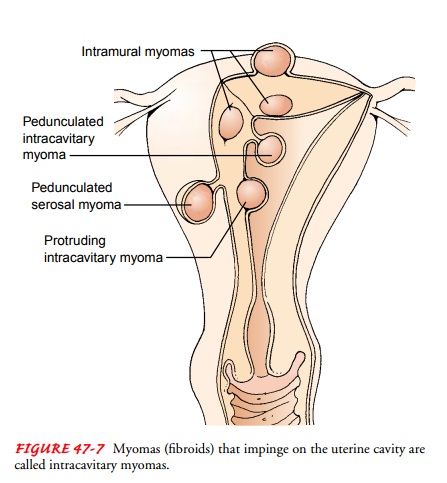 Myomatous or fibroid tumors of the uterus are estimated to occur in 25% of women over age 30.

Myomatous or fibroid tumors of the uterus are estimated to occur in 25% of women over age 30. Some women are geneti-cally predisposed. They are a common reason for hysterectomy as they often result in menorrhagia that can be difficult to control. They arise from the muscle tissue of the uterus and can be found in the lining (intracavitary), muscle wall (intramural), and out-side surface (serosal) of the uterus. They develop slowly in women between the ages of 25 and 40 and may become large. Fibroids may cause no symptoms, or they may produce abnormal vaginal bleeding. Other symptoms are due to pressure on the surround-ing organs and include pain, backache, constipation, and urinary problems. Menorrhagia (excessive bleeding) and metrorrhagia (irregular bleeding) may occur because fibroids may distort the uterine lining (Fig. 47-7). 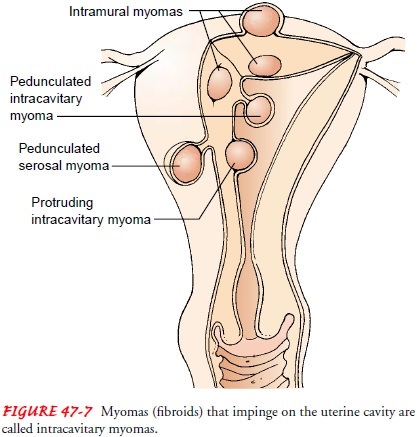 The treatment of uterine fibroids depends to a large extent on their size, symptoms, and location. The patient with minor symp-toms is closely monitored. If she plans to have children, treatment is as conservative as possible. As a rule, large tumors that produce pressure symptoms should be removed (myomectomy). The uterus may be removed (hysterectomy) if symptoms are bother-some and childbearing is completed (see later discussion of nursing care for a patient having a hysterectomy).

Several other alternatives to hysterectomy have been devel-oped for the treatment of excessive bleeding due to fibroids. These include:

·      Hysteroscopic resection of myomas: a laser is used through a hysteroscope passed through the cervix; no incision or overnight stay is needed

·       Laparoscopic myomectomy: removal of a fibroid through a laparoscope inserted through a small abdominal incision

·      Laparoscopic myolysis: a laser or electrical needles are used to cauterize and shrink the fibroid

·      Laparoscopic cryomyolysis: electric current is used to coag-ulate the fibroid

·       Uterine artery embolization: polyvinyl alcohol particles are injected into the blood vessels that supply the fibroid, shrinking it; this procedure may result in serious complica-tions such as pain, infection, and bleeding

Fibroids usually shrink and disappear during menopause, when estrogen is no longer produced. Medications (eg, leupro-lide [Lupron]) or other GnRH analogs that induce medical menopause may be prescribed to shrink the tumors. This treat-ment consists of monthly injections, which may cause hot flashes and vaginal dryness. This treatment is usually short term (ie, be-fore surgery) to shrink the fibroids, allowing easier surgery, and to alleviate anemia, which may coexist due to heavy menstrual flow. Antifibrotic agents are under investigation for long-term treatment of fibroids. Mifepristone (RU 486), a progesterone an-tagonist, has also been prescribed.