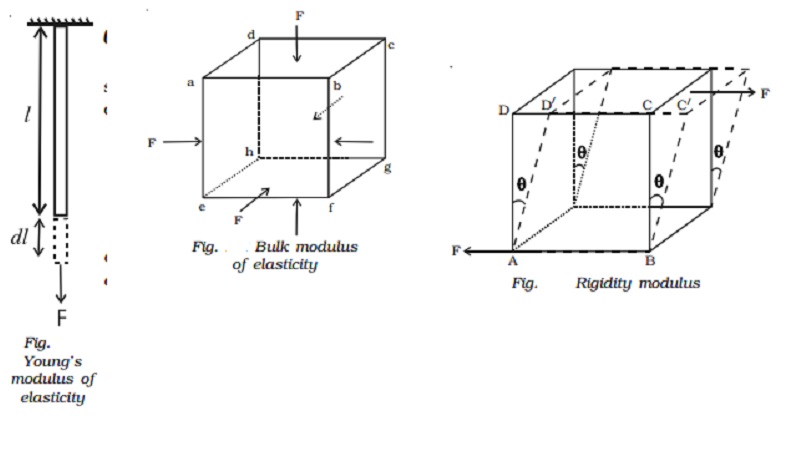 Depending upon the type of strain in the body there are three different types of modulus of elasticity. They are (i) Young's modulus (ii) Bulk modulus (iii) Rigidity modulus

Depending upon the type of strain in the body there are three different types of modulus of elasticity. They are

(i) Young's modulus of elasticity

Consider a wire of length l and cross sectional area A stretched by a force F acting along its length. Let dl be the extension produced.

Suppose euqal forces act perpendicular to the six faces of a cube of volume V as shown in Fig.. Due

to the action of these forces, let the decrease in volume be dV.

Bulk modulus of the material of the object is defined as the ratiobulk stress to bulk strain.

It is denoted by k

Let us apply a force Ftangential to the top surface of a block whose bottom AB is fixed, as shown in Fig.. 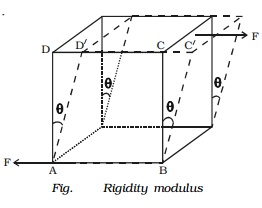 Under the action of this tangential force, the body suffers a slight change in shape, itsvolume remaining unchanged.The side AD of the block is sheared through an angle θ to the position AD'.

If the area of the top surface is A, then shear stress = F/A.

Shear modulus or rigidity modulus of the material of the object isdefined as the ratio of shear stress to shear strain. It is denoted by n.

Table  lists the values of the three moduli of elasticity for some commonly used materials. 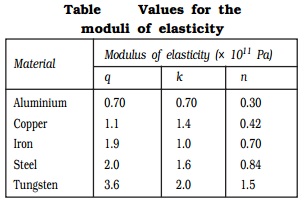