The Roots of Mood Disorders

What produces the mood disorders? Depression and bipolar disorder are thought to result from multiple contributing factors, factors that include genetic, neurochemical, and psychological influences.

The Roots of Mood Disorders

What produces the mood disorders? Depression and bipolar disorder are thought to result from multiple contributing factors, factors that include genetic, neurochemical, and psychological influences.

The mood disorders have important genetic components. This is reflected in the fact that the concordance rate is roughly two times higher in identical twins than in frater-nal twins (Sullivan, Neale, & Kendler, 2000). The pattern is even clearer for bipolar dis-order: If someone’s identical twin has the disorder, there is a 60% chance that he, too, will have the disorder; the concordance rate for fraternal twins is much lower, 12% (Kelsoe, 1997).

Importantly, though, the genetic evidence indicates a clear distinction between depression and bipolar disorder. The two disorders overlap in their symptoms (i.e., clinical depression resembles the depressed phase of bipolar disorder), but they proba-bly arise from different sources. This is evident, for example, in the fact that people with one of these disorders tend to have relatives with the same condition but not the other. Apparently, then, there are separate inheritance pathways for each, making it likely that they are largely separate disorders (Gershon, Nurnberger, Berrettini, & Goldin 1985; Moffitt, Caspi, & Rutter, 2006; Torgersen, 1986; Wender et al., 1986).

Drugs that influence the effects of various neurotransmitters can often relieve symp-toms of mood disorders, and this suggests that these mood disorders arose in the first place because of a disorder in neurotransmission. Three neurotransmitters seem criti-cal for mood disorders: norepinephrine, dopamine, and serotonin. Many of the anti-depressant and mood-stabilizing medications work by altering the availability of these chemicals at the synapse (Miklowitz & Johnson, 2006; Schildkraut, 1965).

How these neurochemical abnormalities lead to mood disorders is uncertain, but it is clear that these disorders involve more than a simple neurotransmitter shortage or excess. In the case of depression, this is evident in the fact that antidepressant drugs work almost immediately to increase the availability of neurotransmitters, but their clinical effects usually do not appear until a few weeks later. Thus, neurotransmitter problems are involved in depression (otherwise the drugs would not work at all), but the exact nature of those problems remains unclear.

In the case of bipolar disorder, the mystery lies in the cycling between manic and depressive episodes, especially since, in some patients, this cycling is quite rapid and seemingly divorced from external circumstances. Some believe the cycling is related to dysfunction in neuronal membranes, with the consequence that the membranes mismanage fluctuations in the levels of various neurotransmitters (Hirschfeld & Goodwin, 1988; Meltzer, 1986).

To better understand the underlying brain bases of these mood disorders, researchers have used both structural and functional brain imaging. Studies using positron emission tomography (PET) show that severe depression is associated with heightened brain acti-vation in a limbic system region known as the subgenual cingulate cortex (Drevets, 1998). This finding makes sense, given that inducing sadness in healthy participants leads to increased activation in this brain region (Mayberg et al., 1999), as well as the evi-dence that when depression is successfully treated, brain activity in this region returns to normal levels (Mayberg et al., 1997).

Our account of the mood disorders also needs to take account of life experiences. For example, depression and bipolar disorder are often precipitated by an identifiable life crisis, whether that crisis involves marital or professional difficulties, serious physical illness, or a death in the family (S. L. Johnson, 2005a; Monroe & Hadjiyannakis, 2002; Neria et al., 2008). Broader contextual factors, such as whether someone lives in a good or bad neighborhood, may also influence whether a person develops depression, even when controlling for risk factors associated with the person’s age, ethnicity, income, education, and employment status (Cutrona, Wallace, & Wesner, 2006). The impor-tance of psychological factors is also evident in the fact that individuals with mood dis-orders are at much greater risk for relapse if they return after hospitalization to families who show high levels of criticism and hostility (Hooley, Gruber, Scott, Hiller, & Yurgelin-Todd, 2005; Miklowitz, 2007; Segal, Pearson, & Thase, 2003).

As we mentioned earlier, though, personal and environmental stresses do not, by themselves, cause mood disorders. What we need to ask is why some people are unable to bounce back after a hard blow and why, instead of recovering, they spiral downward into depression.

Part of the explanation may be genetic, and some researchers are focusing on a gene that regulates how much serotonin is available at the synapse. As discussed, the gene itself is not the source of depression; instead, the gene seems to create a vulner-ability to depression. The illness itself will emerge only if the vulnerable person also experiences some significant life stress (Caspi et al., 2003). However, this finding has been controversial, and research in this area is ongoing (e.g., Munafo, Durrant, Lewis, & Flint, 2009; Risch et al., 2009).

Another part of the explanation for why stress puts some people at greater risk for depression than others turns out to be social: severe stress is less likely to lead to a mood disorder if a person has supportive family and friends (Brown & Harris, 1978; Johnson et al., 1999; Joiner, 1997). Still another crucial factor is how a person thinks about stressful events when they occur.

Many depressed individuals—whether they are experiencing unipolar depression or are in the depressive phase of bipolar disorder—believe that both they and the world are hopeless and wretched. It seems plausible that these beliefs are produced by the patient’s mood, but, according to the psychiatrist Aaron Beck, the opposite is true, at least in the case of depression: The beliefs come first; they produce the depression (see, for example, Beck, 1967, 1976). Beck argues that depression stems from a set of intensely negative and irrational beliefs: the beliefs some people hold that they are worthless, that their future is bleak, and that whatever happens around them is sure to turn out for the worst. These beliefs form the core of a negative cognitive schema by which a person interprets whatever happens to her, leaving her mood nowhere to go but down.

A related account of depression also focuses on how people think about what happens to them. As we saw, people differ in how they explain bad events. Do we think that a bad event happened because of something we did, so that, in some direct way, we caused the event? Do we believe that similar bad events will arise in other aspects of our lives? And do we think that bad events will continue to happen to us, perhaps for the rest of our lives? Peterson and Seligman propose that much depends on how we answer these questions, and, moreover, they suggest that each of us has a consistent style for how we tend to answer such questions—which they call an explanatory style. In their view, a person is vulnerable to depression if her explanatorystyle tends to be internal (“I, and not some external factor, caused the event”), global (“This sort of event will also happen in other areas of my life”), and stable (“This is going to keep happening”). This explanatory style is not by itself the source of depres-sion; once again, we need to separate diathesis and stress. But if someone has this explanatory style and then experiences a bad event, that person is at considerably elevated risk for depression (Peterson & Seligman, 1984). In addition, it appears that the explanatory style usually predates the depression, with the clear implication that this way of interpreting the world is not caused by depression but is instead a factor predisposing an individual toward depression (Abramson et al., 2002; Alloy, Abramson, & Francis, 1999; Peterson & Park, 2007).

Clearly, there are both biochemical and cognitive contributors to mood disorders. As we mentioned earlier, though, mood disorders are also influenced by social settings. This is evident, for example, in the fact that depression is less likely among people with a strong social netowork of friends or family. The importance of social surroundings is also visible in another way: the role of culture in shaping the likelihood that depression will emerge, or the form that the disorder takes.

Depression occurs in all cultures, and, in fact, the World Health Organization ranked depression fourth among all causes of disability worldwide (Miller, 2006b). However, its prevalence varies widely from one country to the next. For example, depression is—not surprisingly— more common in countries such as Afghanistan that 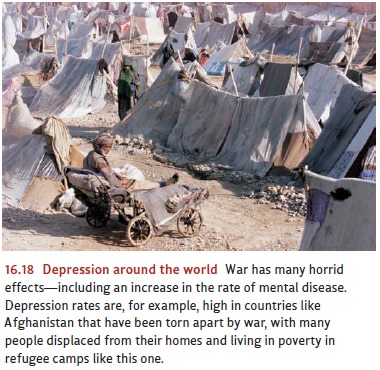 have been torn apart by war (Bolton & Betancourt, 2004; Figure 16.18); the difficulties in such countries also lead to other disorders, including post-traumatic stress disorder. In contrast, depression is much less commonly diagnosed in China, Taiwan, and Japan than in the West. When the disorder is detected in these Asian countries, the symptoms are less often psychological (such as sadness or apathy) and more often bodily (such as sleep dis-turbance, weight loss, or, in China, heart pain; Kleinman, 1986; G. Miller, 2006a; Tsai & Chentsova-Dutton, 2002). Why is this? There are several possibilities, starting with the fact that cultures differ in their display rules for emotion , which will obvi-ously influence the presentation and diagnosis of almost any mental disorder. In addition, people in these Asian countries may differ in how they understand and perhaps even expe-rience their own symptoms, and this, too, can influence diagnosis.

Even within a single country, the risk of mood disorders varies. Depression, for example, is more common among lower socioeconomic groups (Dohrenwend, 2000; Monroe & Hadjiyannakis, 2002), perhaps because these groups are exposed to more stress. In contrast, bipolar disorder is more common among higher socioeconomic groups (Goodwin & Jamison, 1990), conceivably because the behaviors produced during a person’s hypomanic phases may lead to increased accomplishment.