There is no question that many disorders—and, indeed, many life experiences— involve considerable pain or distress.

There is no question that many disorders—and, indeed, many life experiences— involve considerable pain or distress. To protect themselves against this discomfort, people engage in a variety of defensive strategies. One of these strategies, which we have mentioned in other contexts, is dissociation—a term that covers the various ways in which people try to distance themselves psychologically from ongoing events. They establish this distance by saying things like “This can’t be happening” or “This is all a dream” or “This isn’t happening to me.” With these defenses in place, people may, during a calamity, even experience themselves as eerily calm, floating outside their own bodies as they watch themselves react.

These adjustments are often adaptive, a way of coping with horrific events. But such adjustments can go too far and, in their extreme form, are the defining feature of the dissociative disorders. In some cases, for example, a person develops dissociativeamnesia and is suddenly unable to remember some period of his life, or even hisentire past, including his own identity. Such episodes usually last less than 1 week (Kihlstrom & Schacter, 2000; Maldonado, Butler, & Spiegel, 2002). In other cases, the dissociation produces dissociative fugue, in which the person wanders away from home and then, days or even months later, suddenly realizes that she is in a strange place, does not know how she got there, and has total amnesia for the entire period.

Far more controversial is the diagnosis of dissociative identity disorder (DID), a condition formerly known as multiple personality disorder. Here the dissociation is said to be so massive that it results in two or more distinct personalities, each with its own style, habits, and beliefs. The personalities often differ in their interests, their age, their sexual orientation, and their morals.

In one case, a patient named Julie mentioned, during therapy, that she wanted to introduce someone to the therapist. She closed her eyes, frowned, and then opened her eyes slowly, asserting that she was Jerrie, not Julie. Roughly 1 hour later, in the same way, she introduced Jenny, a third personality in the same body. These three women were different in many ways: Julie and Jenny were heterosexuals; Jerrie was a lesbian. Jenny was frightened and insecure; Julie was a sophisticated and caring mother. Jerrie was accomplished and proficient in the business world and hated the fact that Julie was a heavy smoker (Davis & Osherson, 1977).

Until several decades ago, cases like this were rare, with fewer than 200 reported before 1975. Now cases number in the thousands; the large majority are women (Kluft, 1987; C. A. Ross, 1999). The number of personalities reported in each case has also increased dramatically: A review of the early cases indicated that most people with DID had only 2 or 3 separate identities (Taylor & Martin, 1944); a more recent survey indicates that the average number of identities reported by patients is 15, with some cases reporting far more than this (C. A. Ross, 1997).

These massive increases are one of the reasons this disorder has been a focus of so much debate, with some critics arguing that the flood of diagnoses may reflect a fad among therapists who inadvertently lead suggestible patients to develop the signs and 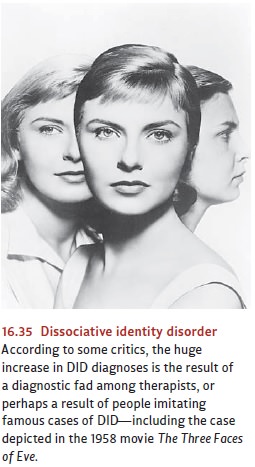 What should we make of this debate? It seems likely that at least some cases of DID are in fact faked or inadvertently created by therapists. But it also seems likely that many cases are genuine, and debate continues about the nature of this disorder, its causes, and the best way to treat it (Lilienfeld et al., 1999; C. A. Ross, 1999).

Stepping away from the controversy over DID, and returning to the broader category of dissociative disorders, we can ask: What factors or events lead to these disorders? Here, too, some investigators propose a genetic basis, but research has yielded mixed results (Jang, Paris, Zweig-Frank, & Livesley, 1998; Waller & Ross, 1997). One thing we do know is that people naturally seem to differ in how much, and under what circumstances, they dissociate. Some of the relevant evidence comes from a measure known as the Dissociative Experiences Scale, which asks people directly how often they have experienced various perceptions or behaviors characteristic of dissociation (Carlson & Putnam, 1993). Other evidence comes from work on hypnosis, which some investigators regard as a form of guided dissociation. People differ enormously in how readily or how deeply they can be hypnotized (Ganaway, 1989), and this opens an interesting possibility: Perhaps some people were, as children, particularly adept at self-hypnosis and learned to use this skill as a defense—putting themselves into a self-induced hypnotic trance to escape from the stresses (or perhaps traumas) in their lives (Bliss, 1980). This skill may then create a readiness to dissociate in everyday life, per-haps predisposing these individuals to develop a dissociative disorder.

Thus, a skill in (or habit of ) dissociation may create the diathesis for a dissociative dis-order. To precipitate the full-fledged disorder, however, there also has to be some unusual stress, and, in fact, most cases of dissociative amnesia occur after the same kinds of cata-clysmic events that lead to post-traumatic stress disorder. The same holds for dissociative fugues, which can also develop suddenly after personal misfortunes or financial pressures (Andreasen & Black, 1996). The same may be true as well for dissociative identity disor-der: In a large percentage of DID case histories, there are terrifying stories of brutal phys-ical or sexual abuse in childhood, often including incest (Putnam, Guroff, Silberman, Barban, & Post, 1986). However, these reports—like the diagnosis of DID itself—have been controversial, inasmuch as they often rely on the person’s recall of the abuse, and, as we discussed, there has been debate over how to interpret this recall.