In addition to this general definition of mental disorder, the DSM gives definitions of the specific mental disorders, definitions that we can use to decide which disorder—if any—a person has. These “definitions” consist of lists of specific criteria, a certain number of which must be met for a given disorder to be diagnosed. The diagnosis is important because it is the first step both in understanding why a person is suffering and (crucially!) in deciding how to help that person.

Mental health professionals use the term assessment to refer to the set of proce-dures for gathering information about an individual, and an assessment may or may not lead to a diagnosis—a claim that an individual has a specific mental disorder. Clinical assessment often includes clinical interviews, self-report measures, and pro-jective tests. It may also include laboratory tests such as neuroimaging  or blood analyses that can inform the practitioner about the patient’s physical well-being—for example, whether the patient has suffered a stroke or taken a mood-alter-ing drug.

Assessments usually begin with a clinical interview, in which the clinician asks the patient to describe her problems and concerns (Figure 16.5). Some aspects of the inter-view will be open-ended and flexible, as the clinician explores the patient’s current state and history. In addition, the clinician may rely on a semistructured interview, in which specific questions are asked in a specific sequence, with attention to certain types of content. For example, the clinician might use the Structured Clinical Interview for DSM Disorders (SCID), which is designed to ask questions directly pertinent to certain diagnostic categories. 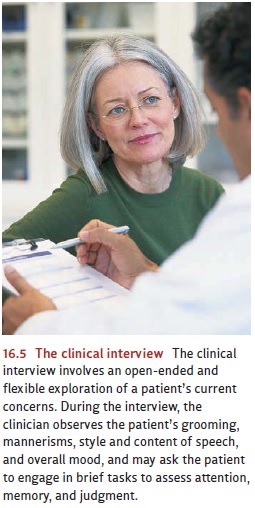 Throughout, the clinician will pay careful attention to the patient’s set of com-plaints, or symptoms. Patients who say, “I hear voices,” “I feel nervous all the time,” and “I feel hopeless” are reporting symptoms. The clinician also looks for any objective signs that might accompany these symptoms. If the same patients, respectively, turntoward a stapler as though it were speaking, shake visibly, and look teary-eyed, these would be signs that parallel the patients’ symptoms. Sometimes, though, symptoms do not correspond to signs, and such discrepancies are also important. For example, a patient might state, “My head hurts so bad it’s like there’s a buzz saw running through my brain,” even thought the patient seems to be calm and unconcerned, and this discrepancy, too, is informative.

The full pattern of the patient’s symptoms and signs, taken together with their onset and course, will usually allow the clinician to form an opinion as to the specific disorder(s). This diagnosis is not set in stone, but serves as the practitioner’s best judgment about the patient’s current state. The diagnosis may well be revised as the clinician gains new information, including information about how the patient responds to a particular form of treatment.

In some clinical assessments, a clinician will also seek information about a patient by administering self-report measures. Some of these measures are relatively brief and target a certain set of symptoms. These include measures such as the Beck Depression Inventory (Beck, Steer, & Brown, 1996); sample items from this inventory are shown in Figure 16.6. Other self-report measures are much broader (and longer), such as the Minnesota Multiphasic Personality Inventory, or MMPI. This test was developed in 1940 and was redesigned in 1989; the current version, the MMPI-2, includes an imposing 567 items (Butcher, Dahlstrom, Graham, Tellegen, & Kaemmer, 2001; Butcher et al., 1992). 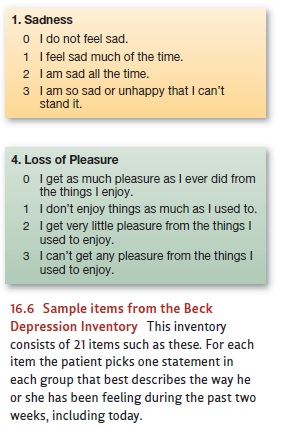 To construct the MMPI, its authors began with a large pool of test questions and administered them to patients known to have a variety of different mental disorders, as well as to a group of nonpatients. Next, they compared the patients’ responses to those of the nonpatients. If all groups tended to respond to a particular question in the same way, that question was deemed uninformative and was removed from the test. A question was kept on the test only if one of the patient groups tended to answer it differently from how the nonpatient group answered it. The result was a test specifically 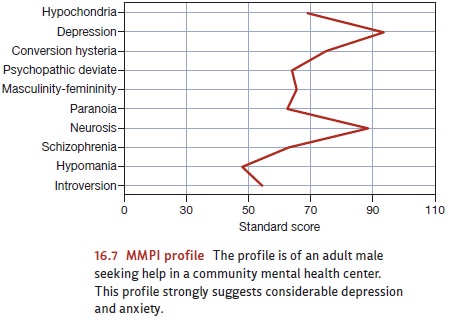 Some clinicians supplement clinical interviews with what is called a projective test. Advocates of projective tests argue that when the patient is asked to respond to stimuli that are essentially unstructured or ambiguous, he cannot help but impose a structure of his own, and, in the process of describing (or relying on) this structure, he gives valuable information about unconscious wishes and conflicts that could not be revealed by direct testing.

One such test has the participant make up a story to describe what is going on in a picture (the Thematic Apperception Test, or TAT; C. D. Morgan & Murray, 1935). Responses to these pictures are seen as revealing implicit or otherwise hidden motives (Figure 16.8; McAdams, 1980; for variants on this procedure, see McClelland, Koestner, & Weinberger, 1989; Winter, 1999). Another projective test, the Rorschach Inkblot Test, has the patient describe what he sees in an inkblot (Figure 16.9; Rorschach, 1921). 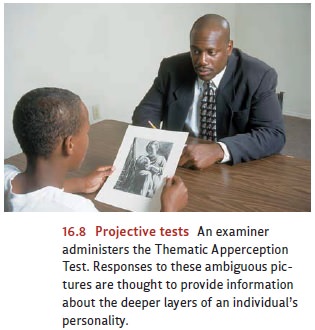 Projective tests such as these are extremely popular—with more than 8 in 10 clini-cians reporting that they use them at least occasionally (Watkins, Campbell, Nieberding, & Hallmark, 1995). However, there is general agreement in the research community that these tests’ popularity outstrips their demonstrated validity. One review of Rorschach findings reported only small correlations with mental health–related criteria (Garb, Florio, & Grove, 1998), and there is ongoing debate about the role projective tests should play in diagnosis (Garb, Wood, Nezworski, Grove, & Stejskal, 2001; Lilienfeld, Wood, & Garb, 2000; Rosenthal, Hiller, Bornstein, Berry, & Brunell-Neuleib, 2001; Westen & Weinberger, 2005).