A phobia is characterized by intense and irrational fear coupled with great efforts to avoid the feared object or situation.

A phobia is characterized by intense and irrational fear coupled with great efforts to avoid the feared object or situation (Figure 16.10). The word irrational is important here. Someone living in the middle of a swamp and constantly worried about snakes is not manifesting a phobia; her fear is perfectly reasonable. But someone living in a San Francisco apartment and incapacitated by the same fear probably does have a phobia. And it does not help that the person with the phobia knows that the fear is groundless; for someone with a phobia, this knowledge does not in any way diminish the fear. 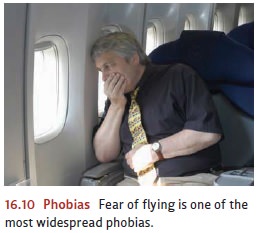 There are several types of phobias, including specific phobias, that are directed at a par-ticular object, like snakes or blood (Figure 16.11). During the nineteenth century, many of these irrational fears were cataloged and assigned exotic-sounding Greek or Latin names. Examples are fear of high places (acrophobia), enclosed places (claustropho-bia), crowds (ochlophobia), germs (mysophobia), cats (ailurophobia), and even the number 13 (triskaidekaphobia)—the list is long. However, these phobias are not equally common; some are quite frequent (fear of heights, fear of snakes); others are extremely rare (fear of specific numbers). Overall, though, the lifetime prevalence for any kind of specific phobia is estimated at 13% (Kessler et al., 2005), and women are about twice as likely as men to have specific phobias (Bourdon et al., 1988). 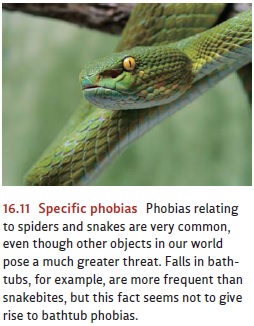 Some of these phobias seem relatively harmless, but others can be life changing, because the person suffering from a phobia almost always develops strategies (sometimes elaborate ones) for avoiding the phobic object. Thus, people with claustro-phobia may climb many flights of stairs rather than step into an elevator. Likewise, an executive with a fear of heights may choose to quit his job rather than accept a promo-tion that gives him an office with a glorious view from a 20th-story window. These pho-bias will often expand in scope, so that a fear of spiders, say, can grow to become a fear of insects—and a fear of being outdoors where the spiders or insects might lurk, or a fear of anything brushing across the person’s face, because it might be a spiderweb.

How do these fears feel to the person experiencing the phobia? One person describes the fear of flying this way:

I used to start dreading a plane trip a month before I was due to leave. It was an awful feeling when that airplane door closed and I felt trapped. My heart would pound, and I would sweat bullets. When the airplane would start to ascend, it just reinforced the feeling that I couldn’t get out. When I think about flying, I picture myself losing control, freaking out, and climbing the walls, but of course I never did that. I’m not afraid of crashing or hitting turbulence. It’s just that feeling of being trapped. . . . These days I only go places where I can drive or take a train. My friends always point out that I couldn’t get off a train traveling at high speeds either, so why don’t trains bother me? I just tell them it isn’t a rational fear.

Unlike the object-specific fears seen in specific phobias, individuals with social phobia (also referred to as social anxiety disorder) are intensely afraid of being watched and judged by others (Figure 16.12). Typically, these concerns center around negative evalu-ations (“He’ll think I’m an idiot”), but there is increasing evidence that even positive evaluations can be threatening (Weeks, Heimberg, Rodebaugh, & Norton, 2008). The lifetime prevalence for social phobia is 13% (Kessler et al., 2005), and women and men are equally affected by this disorder. 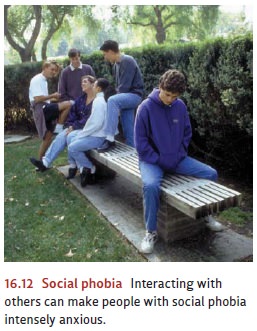 People with social phobia will desperately try to avoid situations in which they must expose themselves to public scrutiny. They will avoid public speaking or performing because they think others will think they are stupid, they will not eat in restaurants for fear that they will choke on their food, and they will not go to parties or meetings because they may stutter and stammer when trying to talk. As one person with social anxiety disorder put it, “In school I was always afraid of being called on, even when I knew the answers. When I got a job, I hated to meet with my boss. I couldn’t eat lunch with my co-workers. I worried about being stared at or judged, and worried that I would make a fool of myself. My heart would pound, and I would start to sweat when I thought about meetings. The feelings got worse as the time of the event got closer. Sometimes I couldn’t sleep or eat for days before a staff meeting”. When forced into situations of this sort, they may try to “fortify” themselves with alcohol or drugs, making substance abuse or dependence a real risk (Pollack, 2001).