We have seen that people differ from one another in many ways, both in their desirable qualities, like being intelligent or helpful, and in their undesirable ones, like being selfish or aggressive. Even so, the attributes we have considered all fall within the range that most people consider acceptable or normal. In this, we consider differences that are outside the normal range of variation— differences that carry us into the realm of mental disorders such as depression, anxiety, and schizophrenia. These are conditions that cause considerable suffer-ing and profoundly disrupt people’s lives—both the lives of the people afflicted with the disorders and, often, the lives of others around them.

The study of mental disorders is the province of psychopathology, or, as it is sometimes called, abnormal psychology. Like many corners of psychology, this domain has been studied scientifically only in the last century. Concerns about mental illness, however, have a much longer history. One of the earliest-known medical documents, the Ebers papyrus (written about 1550 C.E.), refers to the disorder we now know as depression (Okasha & Okasha, 2000). Other ancient cases include King Saul of Judaea, who alternated between bouts of homicidal frenzy and suicidal depression, and the Babylonian king Nebuchadnezzar, who walked on all fours in the belief that he was a wolf (Figure 16.1). Across the millennia, though, people have had very different concep-tions of what causes these disorders. 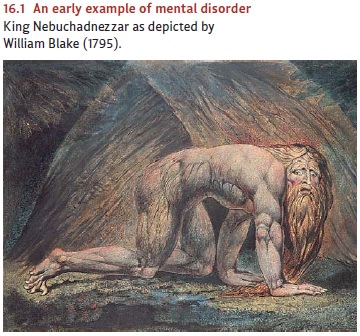 The earliest theories held that a person afflicted by a mental disorder was possessed by evil spirits. As we will see, people tried various extreme remedies to deal with this problem, such as flogging and starving, with the aim of driving the evil spirits away.

In recent centuries, a more sophisticated conception of mental disorders began to develop—namely, that they are a type of disease, to be understood in the same way as other illnesses. Proponents of this somatogenic hypothesis (from the Greek soma, meaning “body”) argued that mental disorders, like other forms of illness,could be traced to an injury or infection. This position gained considerable credibil-ity in the late nineteenth century, thanks to discoveries about general paresis.

General paresis is a disorder characterized by a broad decline in physical and psy-chological functions, culminating in marked personality aberrations that may include grandiose delusions (“I am the king of England”) or profound hypochondriacal depressions (“My heart has stopped beating”). Without treatment, the deterioration progresses to the point of paralysis, and death occurs within a few years. The break-through in understanding paresis came in 1897, when the Viennese physician Richard von Krafft-Ebing (1840–1902) discovered that it was actually a consequence of infec-tion with syphilis. This discovery paved the way for the development of antibiotics that could cure the infection, and, if the drugs were given early enough, the symptoms of paresis could be avoided altogether.

It seems, then, that general paresis can be understood and treated like any other medical problem. Should other forms of mental disorder be understood in the same fashion—as the result of an infection or perhaps an injury? This view gained many supporters in the late 1800s, including Emil Kraepelin (Figure 16.2), whose textbook, Lehrbuch der Psychiatrie, emphasized the importance of brain pathology in producingmental disorders. 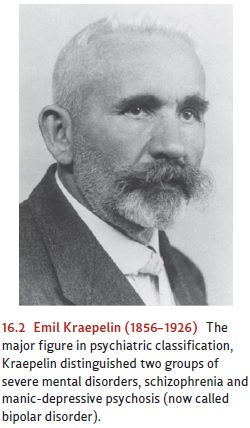 However, a somatogenic approach cannot explain all mental disorders. For example, more than a hundred years ago, scholars realized that this approach was not appropriate for the disorder then known as hysteria, which we encountered in our discussion of psychoanalysis . Patients with hysteria typically showed odd symptoms that seemed to be neurological, but with other indications that made it plain there was no neurological damage. Some patients reported that their limbs were paralyzed, but under hypnosis they could move their arms and legs perfectly well, indicating that the nerves and muscles were fully functional. Their symptoms, therefore, were not the result of a bodily injury; instead, they had to be understood in terms of a psychogenic hypothesis, which holds that the symptoms arise via psychological processes.

Across much of the late 19th and early 20th centuries, the most prominent version of this hypothesis was Sigmund Freud’s, which described mental illness as resulting from inner conflicts and defensive maneuvers aimed at dealing with those conflicts. Early in the 20th century, other theorists offered alternative conceptions of mental illness—but, like Freud, argued that the illness arose from psychological processes, and not from bod-ily injury. For example, the early behaviorists offered learning models of mental illness, building on the mechanisms. In this view, many mental disor-ders result from maladaptive learning and are best corrected with remedial learning.

Historically, the somatogenic and psychogenic approaches were offered as sharply dis-tinct proposals, and scholars debated the merits of one over the other. We now know that both approaches have considerable validity. Biomedical factors play a critical role in producing some forms of psychopathology; childhood experiences and maladaptive learning contribute as well. As a consequence, each of these approaches by itself is too narrow, and it would be a mistake to point to either somatogenic or psychogenic factors as “the sole cause” of any disorder. To understand why, let’s look more closely at the idea of cause in this domain.

Imagine someone who goes through a difficult experience—perhaps the breakup of a long-term relationship—and subsequently becomes depressed. We might be tempted to say that the breakup caused the depression, but the breakup was not the only force in play here. Many people experience breakups without becoming depressed; this tells us that a breakup will cause depression only if other factors are present.

What are those other factors? Part of the answer lies in a person’s biology, because, as we will see, some people have a genetic tendency toward depression. This tendency remains unexpressed (and so the person suffers no depression) until the person expe-riences a particularly stressful event. Then, when that stressful event takes place, the combination of the event plus the biological tendency will likely lead to depression.

This example suggests that we need a two-part theory of depression, and the same is true for virtually every other form of psychopathology as well. This two-part conception is referred to as a diathesis-stress model (Bleuler, 1963; Meehl, 1962; Rosenthal, 1963), with one set of factors (the diathesis) creating a predisposition for the disorder, and a dif-ferent set of factors (the stress) providing the trigger that turns the potential into the actual disorder (Figures 16.3). Notice that, by this model, neither the diathesis nor the stress by itself causes the disorder; instead, the disorder emerges only if both are present. 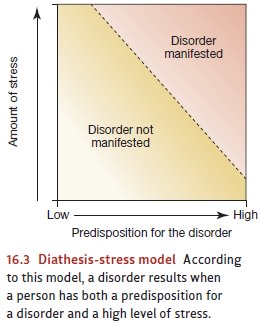 In many cases, the diathesis takes the form of a genetic tendency—one that makes a person vulnerable to depression if, during his lifetime, he encounters a significant source of stress. It’s the combination of the vulnerability plus the stress that leads to the illness. In other cases, the diathesis can take a very different form. For example, a different factor may be how a person thinks about the events he experiences—in particular, whether he tends to see himself as somehow responsible for stressful, negative events . But, again, this style of thinking, by itself, does not cause depression. Instead, the style of thinking is only a diathesis: It creates a risk or a vulnerability to depression, and if someone has this problematic thinking style but leads a sheltered life—protected from the many losses and difficulties faced by others—then he may never develop depression.

Examples like these show the power of the diathesis-stress model, but they also reveal that the model may be too simple. Often there are multiple diatheses for a particular indi-vidual and a particular mental illness—including genetic factors, styles of thinking, and more. Likewise, multiple factors often create the stress, including combinations of harsh circumstances (for example, relationship difficulties or ongoing health concerns) and spe-cific events (being the victim of a crime, perhaps, or witnessing a devastating accident). 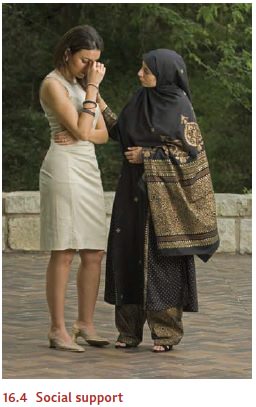