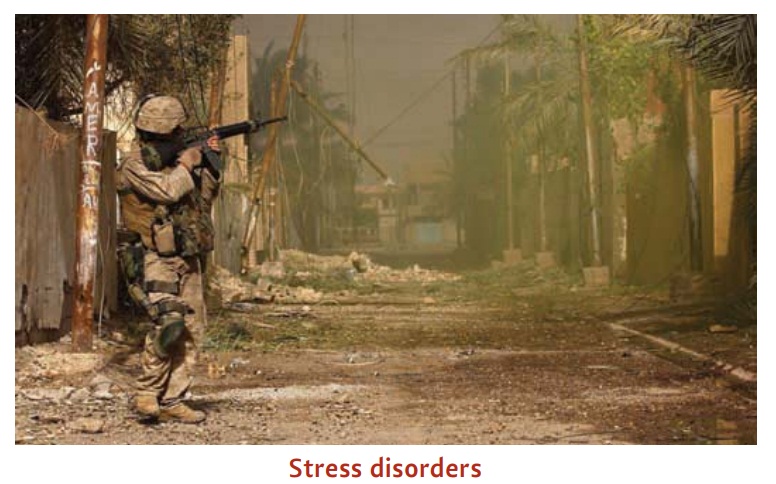 One final category of anxiety disorders includes the two stress disorders, both of which are triggered abruptly by an identifiable and horrific event.

One final category of anxiety disorders includes the two stress disorders, both of which are triggered abruptly by an identifiable and horrific event (Figure 16.15). For women, the most common such event is rape or physical assault; for men, it is military combat. Other calamities can also trigger the stress disorders—being in a serious automobile accident, witnessing a homicide, or encountering the devastation following a natural disaster or terrorist attack (Andreasen & Black, 1996; Wolf & Mosnaim, 1990). 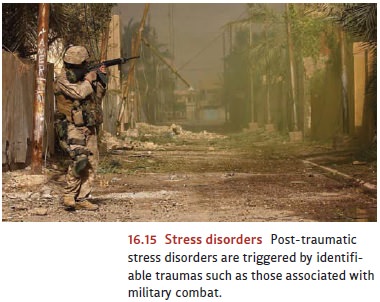 Regardless of what the traumatic event is, the psychological effects are usually the same. Immediately after the trauma, there is

generally a period of numbness, during which the sufferer feels wholly estranged, socially unresponsive, and oddly unaffected by the event, a reaction technically known as dissociation. With this acute stress disorder, there are often recurrent nightmares and waking flashbacks of the traumatic event. These can be so intense and intrusive that the sufferer may momentarily believe that she is back in the situation, reliving the battle, or being attacked once again by the rapist. For some people, the reactions to such traumas are enduring, and if they persist for 1 month after the stressor, the diagnosis becomes post-traumatic stress disorder (PTSD).

The lifetime prevalence of PTSD is 7% (Kessler et al., 2005), and women are more likely to develop PTSD than men, even when controlling for differences in the number of poten-tially traumatic events to which women and men are exposed (Olff, Langeland, Draijer, & Gersons, 2007; Tolin & Foa, 2006; for some complications in diagnosing PTSD, and therefore some complexity in estimating the prevalence of PTSD, see Dobbs, 2009).

One patient describes her experience with PTSD as follows:

I was raped when I was 25 years old. For a long time, I spoke about the rape as though it was something that happened to someone else. I was very aware that it had happened to me, but there was just no feeling. Then I started having flashbacks. They kind of came over me like a splash of water. I would be terrified. Suddenly I was reliving the rape. Every instant was startling. I wasn’t aware of anything around me, I was in a bubble, just kind of floating. And it was scary. Having a flashback can wring you out. The rape happened the week before Thanksgiving, and I can’t believe the anxiety and fear I feel every year around the anniversary date. It’s as though I’ve seen a werewolf. I can’t relax, can’t sleep, don’t want to be with anyone. I wonder whether I’ll ever be free of this terrible problem.

Symptoms of PTSD fall into three major clusters. Re-experiencing symptoms include nightmares about the event and recalling the traumatic event, often in the form of flashbacks that seize the person’s thoughts. The flashbacks are often an accurate reflec-tion of the event but may sometimes be a composite of different events or of different perspectives on the event. In other cases, the flashbacks may include images of what the person thought might happen as part of the trauma. Arousal symptoms include difficul-ties in concentration, problems falling asleep, and extreme responses to being startled. Avoidance symptoms include an active avoidance of people, places, or objects that arelinked to the trauma (Friedman, Keane, & Resick, 2007). Other common symptoms include emotional numbness, a loss of interest in things that once were pleasurable, and outbursts of anger. Still another symptom may be “survivor guilt”—that is, the feeling that one has done something wrong by surviving a traumatic event when friends or relatives were harmed or killed (M. J. Friedman & Marsella, 1996).