As we have noted in the preceding sections, many disorders emerge in children or adolescents.

As we have noted in the preceding sections, many disorders emerge in children or adolescents. Both depression and anxiety disorders are often diagnosed at a young age, and precursors of schizophrenia can be detected in childhood, years before the disease is diagnosed. But, in all these cases, the child’s development itself seems more or less normal: The child still acquires the knowledge and cognitive capacities that we described, as well as most of the social skills and culturally encouraged behaviors. However, development is not normal in a different group of disorders— including mental retardation, various learning disorders, and communication disor-ders. Let us explore this category of developmental disorders by focusing on just two diagnoses within it: autism and attention-deficit/hyperactivity disorder.

Autism involves a wide range of developmental problems, including language andmotor problems, and problems in the social sphere. Autism is not common (affecting less than 0.1% of the world’s population), but it is far more frequent among boys than among girls (Volkmar, Szatmari, & Sparrow, 1993). The disorder is usually diagnosed at a very young age—before a child is three years old (Figure 16.30). 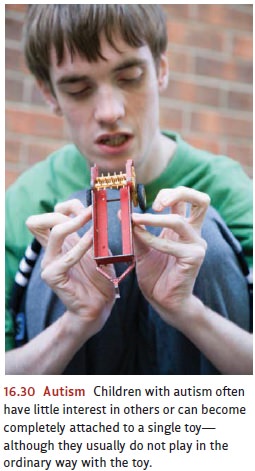 Children with autism show a range of symptoms. They tend to have little interest in other people—and so they are not cuddly as infants or interested in playmates later on.

When they do interact with others, they seem to have little understanding of the others’ intentions, beliefs, or goals and show little or no empathy (Oberman & Ramachandran, 2007). It is not surprising, then, that children with autism often seem unable to join cooperative activities or form friendships. They also seem to lack emotional intelligence, and so seem unable to understand others’ expressions of emotions or how to use their own faces and gestures to convey emotion (Charman et al., 1998).

Children with autism also show marked deficits in language—often not speaking, and typically showing neither skill nor interest in communicating with others. In many cases, they produce high-pitched, birdlike noises instead of speech, or show a pattern of simply echoing speech they have heard—perhaps just a moment ago, or perhaps a few days earlier. Often, they have trouble with pronouns—reversing I and you and referring to themselves by name, rather than saying “I” (Lee, Hobson, & Chiat, 1994).

Autistic children also show peculiar repetitive movement patterns—spinning around for long periods of time, or rocking back and forth for hours. They also seem insistent on sameness, and so become deeply upset—and may throw severe tantrums—if the furniture in the house is rearranged, or their parents vary the house-hold routine in some small way. They may become completely attached to one single toy, carrying it around constantly, but often not playing with it in the ordinary manner.

Finally, children with autism are often mentally retarded, but here there is an odd twist. In a minority of cases, they show islands of preserved (indeed, enhanced) skill, so that a child with autism might turn out to be an extraordinary musician or unbeliev-ably fast in arithmetic calculations.

What produces this broad range of symptoms? There is compelling evidence that autism has a substantial genetic component (Sutcliffe, 2008), and most accounts of autism emphasize some form of biological dysfunction, but there are a variety of pro-posals about what we should count as the “core problem.” One hypothesis is that indi-viduals with autism have some problem in the functioning of their amygdala, a brain structure that plays an essential role in emotion and motivation (Waterhouse, Fein, & Modahl, 1996). A different hypothesis focuses on abnormalities in the cerebellum (Courchesne, Townsend, & Saitoh, 1994). Another hypothesis is that the problem lies in a brain structure that specifically helps the child learn about and understand other people’s thoughts and intentions (Scott & Baron-Cohen, 1996).

Whatever the causes of autism, treatment typically focuses on modifying the behav-ior of the person with autism. Various medications for autism have been tried, but none seem particularly effective. Instead, therapists have had more success with behavior-modification techniques—building on the principles of shaping and reinforcement. These efforts seem to improve both social and intellec-tual functioning and can produce appreciable long-term benefits.

Children with attention-deficit/hyperactivity disorder (ADHD) are impulsive, doing or saying the first thing that occurs to them, often blurting out answers in class with-out raising their hands. They also fidget, getting out of their seats at school and tapping pencils, fingers, or feet (Figure 16.31). They have difficulty keeping their attention focused on a task and have trouble organizing or completing projects. Their school per-formance tends to be poor, and they usually are perceived by others as intrusive and immature. 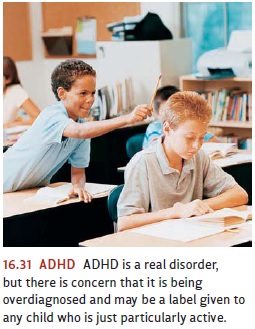 ADHD is common: It is estimated 8% of children are diagnosed with ADHD, with a greater prevalence in boys than in girls (CDC, 2005). Symptoms are most common in young children (e.g., before age 8) and frequently persist into adulthood. ADHD is often treated using the stimulant methylphenidate, which is sold under tradenames such as Ritalin and Concerta. There is no question that these medications can be effec-tive, and global spending on ADHD medications rose threefold from 1993 through 2003 (Jensen et al., 2007; Scheffler, Hinshaw, Modrek, & Levine, 2007). Given the symptoms of ADHD, it may seem odd that a stimulant would be prescribed to treat it, but methylphenidate enhances the release of dopamine and norepinephrine, which in turn activates inhibitory circuits that guard against impulses that might be triggered by the person’s environment.

The ADHD diagnosis has been a source of great controversy because many worry that this “diagnosis” is sometimes just a handy label for children who are particularly active or children who don’t easily adjust to a school routine or a crowded classroom (Livingstone, 1997; Panksepp, 1998). Critics point out that the number of people diagnosed as having ADHD has dramatically increased over the past few decades. Even today, prevalence rates differ dramatically by country, as well as by region within the United States (LeFever, Arcona, & Antonuccio, 2003). The potential for overdiagnosis is troubling for many reasons, ranging from the stigma associated with receiving any diagnosis of a mental disorder to the fact that (especially in the United States) many children who are diagnosed with ADHD take stimulants for years (Diller, 1999), even though these drugs are known to have clear addictive potential.

Despite this controversy, most now agree that ADHD is a genuine mental disorder (Hinshaw, 2008; World Federation for Mental Health, 2005), and that genetic factors playing a large role in producing the symptoms (Burt, Krueger, McGue, & Iacono, 2001; Rutter, 2006; Tannock, 1998). One key biological feature of ADHD appears to be a defi-ciency in prefrontal brain circuits (Barkley, 1997). When these circuits are working nor-mally, they protect us from distractions and momentary impulses; when these circuits are dysfunctional, the result is the pattern of scattered thoughts and actions that char-acterize ADHD.