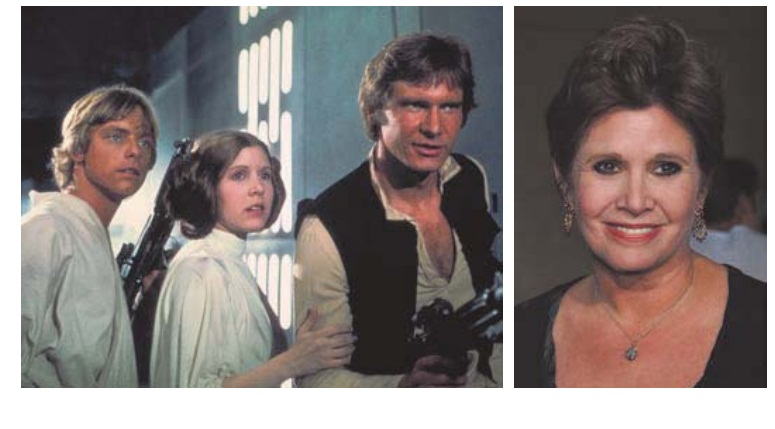 Unlike depression, which is characterized by depressed mood and/or a loss of pleasure, bipolar disorder is characterized by manic and depressive episodes (with normalperiods interspersed) (Figure 16.17). These episodes may be as short as a few hours or as long as several months, and they need not alternate. Some patients with bipolar disorder rarely have manic episodes; others have a large number. Moreover, although depression and mania were once regarded as opposite and mutually exclusive, they are now known to co-occur. In such mixed states, patients exhibit signs of both (e.g., tearfulness and pessimism combined with grandiosity and racing thoughts). 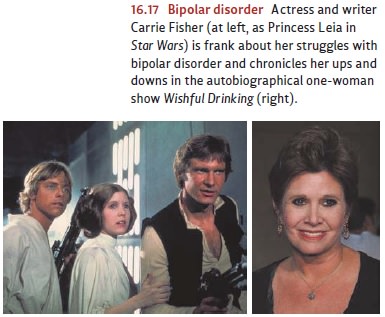 In their milder form, manic states are often hard to distinguish from buoyant spir-its. At this point the person is said to show hypomania. She seems to have shifted into high gear. She is infectiously happy, utterly self-confident, and indefatigable. It is hard to see that something is amiss unless one notices that she jumps from one plan to another, seems unable to sit still for a moment, and quickly shifts from unbounded elation to brittle irri-tation if she meets even the smallest frustration. Kay Redfield Jamison, an expert on bipolar disorder—and a sufferer of it as well—provided a lyrical and frank account of the ecstatic allure of hypomania:

When you’re high it’s tremendous. The ideas and feelings are fast and frequent like shooting stars, and you follow them until you find better and brighter ones. Shyness goes, the right words and gestures are suddenly there, the power to captivate others a felt certainty. There are interests found in unin-teresting people. Sensuality is pervasive and the desire to seduce and be seduced irre-sistible. Feelings of ease, intensity, power, well-being, financial omnipotence, and euphoria pervade one’s marrow.

Hypomania feels good, but it may breed overconfidence and the relentless pursuit of overly ambitious goals (Johnson, 2005). Even more serious problems arise when hypomania develops into full-blown mania. Now the motor is racing and all brakes are off, and in her perceived invincibility the sufferer will likely stop taking her mood-stabilizing medication. She may begin to stay up all night or engage in an endless stream of talk that runs from one topic to another and knows no inhibitions of social or personal propriety.

These feelings of omnipotence are short-lived, however. They recede as acute or psychotic mania sets in, and feelings of invincibility are replaced by terror as the per-son loses her grip on reality. People in the acute manic state may burst into shouts of song, smash furniture, exercise endlessly, sleep only rarely, engage in reckless sexual escapades, spend all their money on gambling, conceive grandiose plans for redirecting the nation’s foreign policy or making millions in the stock market, and go on drinking or drug binges (nearly 60% of people with bipolar disorder are alcohol or drug abusers; Feinman & Dunner, 1996). Jamison described this chaotic state:

I kept on with my life at a frightening pace. I worked ridiculously long hours and slept next to not at all. When I went home at night it was a place of increasing chaos: Books, many of them newly purchased, were strewn everywhere. . . . There were hundreds of scraps of paper as well. . . . One scrap contained an incoherent and rambling poem; I found it weeks later, apparently triggered by my spice collection, which, needless to say, had grown by leaps and bounds during my mania. I had titled it, for reasons that I am sure made sense at the time, “God is an Herbivore.”

Bipolar disorder—which has a lifetime prevalence rate of 4% (Kessler et al., 2005)—is a recurrent disorder: nearly everyone with bipolar disorder has recurrences, and between episodes, most experience mild-to-moderate symptoms (Miklowitz & Johnson, 2006). Although we have focused only on adults, children can also have bipo-lar disorder. Indeed, there has been a 40-fold increase in the past decade or so in the number of people under 20 who have received a diagnosis of bipolar disorder (Moreno et al., 2007). It is not clear, however, whether this dramatic increase reflects a change in the way diagnostic labels are used or whether there is really an increase in the prevalence of childhood onset bipolar disorder (Holden, 2008a).

Both those with depression and those in a depressive phase of bipolar disorder can become suicidal. Some actually attempt suicide, and more than a few succeed. Here is Kay Jamison’s description of an episode of depression:

Each day I awoke deeply tired, a feeling as foreign to my natural self as being bored or indifferent to life. Those were next. Then a gray, bleak preoccupation with death, dying, decaying, that everything was born but to die, best to die now and save the pain while waiting.

The risk of suicide is greater among those with bipolar disorder than among those with any other psychiatric disorder, even depression. In fact, up to 20% of individuals with bipolar disorder commit suicide. As might be expected, people with bipolar disor-der rarely commit suicide during manic episodes (Andreasen & Black, 1996), but sur-prisingly, suicide risk is also relatively low for those in the depths of depression. At that point, gloom is deepest, but so is inertia, and although the patient may have decided to kill herself, she will have neither the energy nor the tenacity to complete the act. She is more likely to follow through on her resolution as she begins to recover from depres-sion and emerges from closely supervised care. Times of greatest risk, therefore, include weekend leaves from a hospital and the period immediately after discharge.

In general, women are three times as likely to attempt suicide as men, but when men make the attempt, they are much more likely to succeed; in fact, four times as many men as women kill themselves (Arias et al., 2003). One reason for the difference is the choice of methods. Women are more likely than men to cut their wrists or swallow a bottle of sleeping pills, methods for which there is some chance of rescue. Men tend to use methods that are irreversible, such as shooting themselves or jumping off a rooftop (Fremouw, Perczel, & Ellis, 1990).