Phrases such as “mental disorder” and “abnormal psychology” suggest that when defining mental disorders, we should start with some conception of normalcy and then define disorders as variations that are not normal.

Phrases such as “mental disorder” and “abnormal psychology” suggest that when defining mental disorders, we should start with some conception of normalcy and then define disorders as variations that are not normal. Thus, taking depression as an example, we might acknowledge that everyone is occasionally sad, but we might worry about (and try to treat) someone whose sadness is deeper and lasts longer than normal sadness.

However, this perspective invites difficulties, because even something normal can be problematic. For example, almost everyone gets cavities, which makes them normal, but this does not change the fact that cavities are a problem. Likewise, many things are “abnormal” without necessarily being symptoms of disorders. Pink is not a normal hair color, but this does not mean that someone who dyes his hair pink is sick. It seems clear, therefore, that we cannot equate being “abnormal” with being “ill.”

How, then, should we define mental disorders? The most commonly accepted defi-nition is the one provided by the American Psychiatric Association (2000) in the Diagnostic and Statistical Manual of Mental Disorders (now in the text revisionof its fourth edition, and hence known as the DSM-IV-TR; for the sake of simplicity, we’ll refer to this work as DSM from this point forward). The DSM states that each of the mental disorders is a

Behavioral or psychological syndrome or pattern that occurs in a person and that is asso-ciated with present distress (e.g., a painful symptom) or disability (i.e., impairment in one or more important areas of functioning) or with a significantly increased risk of suffering death, pain, disability, or an important loss of freedom. In addition, this syndrome or pattern must not be merely an expectable and culturally sanctioned response to a particular event, for example, the death of a loved one. Whatever its origi-nal cause, it must currently be considered a manifestation of a behavioral, psychological, or biological dysfunction in the individual.

Notice that this is a functional definition—it focuses on distress and disability— rather than one that specifies the causes or origins of the problem. Notice too the requirement that the behaviors in question be not “expectable and culturally sanc-tioned.” This aspect of the definition is important, because what is expectable varies across cultures and over time, and so it’s valuable to remind ourselves that we need to take social context into account when assessing an individual’s thoughts, feelings, and behaviors. 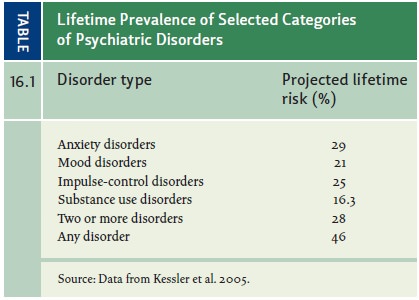 Using this definition, we can tackle a crucial question: Just how common is mental illness? Are we considering problems that are, in fact, relatively rare? Or is mental illness common? Table 16.1 shows the prevalence of different psychiatric disor-ders in the United States. The term prevalence refers to how widespread a disorder is, and researchers typically consider two types of prevalence. Point prevalence refers to how many peo-ple in a given population have a given disorder at a particular point in time. Lifetime prevalence refers to how many people in a certain population will have the disorder at any point in their lives. Reviewing this table, we can see that nearly half of the U.S. population (46%) will experience at least one mental disorder during their lifetimes, and more than a quarter (28%) will experience two or more disorders. Most common are anxi-ety disorders (lifetime prevalence rate of 29%) and impulse-control disorders (lifetime prevalence rate of 25%). These statistics make it clear that large numbers of people suffer mental disorders directly, and of course an even larger number of people (the friends, family members, co-workers, and neighbors of the mentally ill) suffer indirectly. We  are, in short, talking about a problem that is severe and widespread.