In obsessive-compulsive disorder (OCD), the main symptoms are, as the name implies, obsessions (recurrent unwanted and disturbing thoughts) and compulsions (ritualisticbehaviors that serve in some way to deal with the obsessions).

In obsessive-compulsive disorder (OCD), the main symptoms are, as the name implies, obsessions (recurrent unwanted and disturbing thoughts) and compulsions (ritualisticbehaviors that serve in some way to deal with the obsessions). OCD afflicts about 2% of the population sometime in their lives (Kessler et al., 2005; March, Leonard, & Swedo, 1995). It affects both sexes equally and is quite serious: If untreated, most cases worsen over time and are accompanied by recurrent bouts of depression (Barlow, 1988).

One striking feature of OCD is how early it often starts. One-third of adults with OCD developed their symptoms in childhood, often before age 10. As one person with OCD describes it:

When I was six years old I started picking up things with my elbows because I thought I would get my hands dirty if I picked things up with my hands. By the time I was seven I was washing my hands 35 times a day. . . . When I swallowed saliva I had to crouch down and touch the ground. I didn’t want to lose any saliva—for a bit I had to sweep the ground with my hand—and later I had to blink my eyes if I swallowed. I was frustrated because I couldn’t stop the compulsions. Each time I swallowed I had to do something. For a while I had to touch my shoulders to my chin. I don’t know why. I had no reason. I was afraid. It was just so unpleasant if I didn’t.

The obsessions come in many varieties, but common ones involve concerns about dirt and contamination (Figure 16.14), fears of harming someone, and an extraordinary need for balance and symmetry. A salesperson, for example, might worry constantly about infection and so refuse to shake hands with his customers; an otherwise loving parent may have recurrent thoughts of strangling her children; and a seemingly normal businessman may spend hours each night straightening the paintings hanging in his apartment. 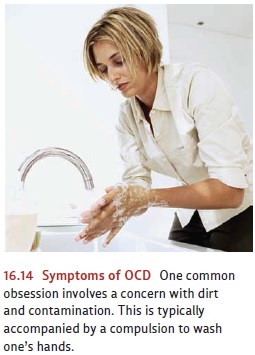 Obsessive thoughts can produce considerable anxiety, and many compulsions may be understood as attempts to counteract this anxiety. An obsession with dirt may lead to compulsions like ritualistic cleaning or continual hand washing; in severe cases, someone with OCD will wash her hands so often to ward off germs that she will end up with open and bleeding sores on her skin. An obsession with forgetting things might lead to checking and rechecking—to make sure that the alarm clock is really turned on, or that the door is really locked. Here, too, the compulsion can become crippling: Someone with OCD may check and recheck the stove so many times, making certain it is really turned off, that he needs hours to leave the house for even the simplest errand. And, in most cases, the sufferers know that their behavior is irrational and that they are washing or checking far more than they need to. However, they are unable to stop their thoughts and urges, and so are all the more tormented by them.