People with schizophrenia experience many different types of symptoms.

People with schizophrenia experience many different types of symptoms (Hyman, 2007). Positive symptoms are behaviors that are not evident in healthy people. Negative(deficit) symptoms reflect an absence of behaviors that are usually evident in healthypeople. Cognitive symptoms reflect impairments in executive functions such as working memory and attentional control and can include the state of psychosis, or loss of contact with reality, so that the beliefs and perceptions of someone with schizophrenia are often extremely bizarre (Figure 16.19). Here is one account of what it feels like to have schizophrenia:

When my first episode of schizophrenia occurred, I was 21, a senior in college in Atlanta, Georgia. I was making good grades, assistant vice president of my in my sorority, president of the Spanish club, and very popular. Everything in my life was just perfect. . . .

All of a sudden things weren’t going so well. I began to lose control of my life and, most of all, myself. I couldn’t concentrate on my school-work, I couldn’t sleep, and when I did sleep, I had dreams about dying. I was afraid to go to class, imagined that people were talking about me, and on top of that I heard voices. I called my mother in Pittsburgh and asked for her advice. She told me to move off campus into an apartment with my sister.

After I moved in with my sister, things got worse. I was afraid to go outside and when I looked out of the window, it seemed that everyone outside was yelling “kill her, kill her.” My sister forced me to go to school. I would go out of the house until I knew she had gone to work; then I would return home. Things continued to get worse. I imagined that I had a foul body odor and I sometimes took up to six showers a day. I recall going to the grocery store one day, and I imagined that the people in the store were saying “Get saved, Jesus is the answer.” Things worsened—I couldn’t remember a thing. I had a notebook full of reminders telling me what to do on that particular day. I couldn’t remember my schoolwork, and I would study from 6:00 p.m. until 4:00 a.m., but never had the courage to go to class on the following day. I tried to tell my sister about it, but she did-n’t understand. She suggested that I see a psychiatrist, but I was afraid to go out of the house to see him.

Positive symptoms—behaviors that are not evident in healthy people—can take several forms. People with schizophrenia typically suffer from delusions—incorrect beliefs that are rigidly maintained despite the absence of any evidence for the belief, and, in many cases, despite contradictory evidence. By one estimate, 90% of all 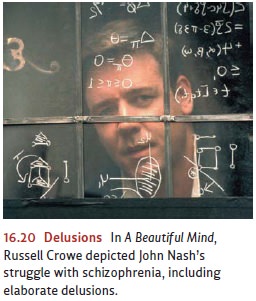 patients with schizophrenia suffer from delusions (Cutting, 1995). Thus a patient with schizophrenia might be convinced he is Moses, or the king of England, or a special messenger from God. Likewise, people with schizophrenia often believe that their thoughts or actions are being controlled by someone else (by space aliens, for example, or by the CIA; Figure 16.20). Sometimes they believe their thoughts are being broadcast (and so are fully audible) to other people. Delusions of reference are also common, in which the patient is convinced that some neutral environmental event is somehow directed at her. For example, a patient might observe two strangers talking and be certain they are talking about him; she sees some people walk by and decides they are following her; he sees a television commercial and is sure it contains a secret message aimed only at him.

A second type of positive symptom is hallucinations—sensory experiences in the absence of any actual input. Most common in schizophrenia are auditory hallucina-tions, and, in particular, voices. Thus, the patient might “hear” the voice of God, or the devil, or a neighbor. If the patient can make out what the voices are saying, she will often report that they are talking about her, shouting obscenities at her, threatening her, or telling her what to do. Researchers have explored these hallucinations via func-tional brain imaging and have documented increased brain activation, during the hallucinations, in primary auditory regions in the temporal lobe (Lennox, Park, Medley, Morris, & Jones, 2000). This finding suggests that when people with schizophrenia have auditory hallucinations, they are hearing voices that sound every bit as vivid and real to them as actual voices.

Positive symptoms also may take the form of unusual behaviors. People with schizophrenia sometimes dress peculiarly (wearing layers of warm clothing on a hot day) and show disorganized behavior, becoming frenzied, running haphazardly, shouting nonsensically, and acting violently (Figure 16.21). In many ways, the disorganized behavior associated with schizophrenia is the closest match to the popular stereotype of madness: A person who has schizophrenia may have speech that is bizarre and babbling, and while he is talking, he may giggle, make silly smiles or odd grimaces, assume odd postures, and have sudden fits of laughing and crying. 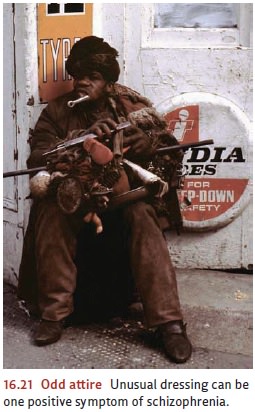 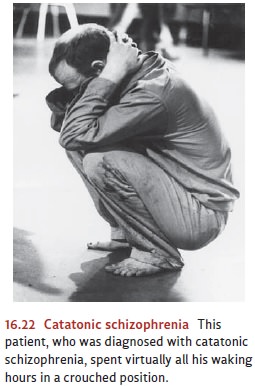 A second type of negative symptom is anhedonia, the loss of interest in activities that we would ordinarily expect to be pleasurable. People with schizophrenia also seem not to anticipate pleasure in the way that healthy people do, a finding that corresponds with lower levels of goal-oriented behavior (Gard et al., 2007).

A third negative symptom—which may be related to the failure to anticipate pleasure— is withdrawal from other people (Tarbox & Pogue-Geile, 2008). In some patients, this with-drawal begins quite early, with a history of few childhood friends and limited adolescent social contact. In others, the individual gradually develops an inner world that becomes more and more private and less and less involved with the social world. As a result, the thoughts of this person become ever more idiosyncratic, until she may have trouble communicating with others even if she wants to. This situation makes it even more likely that others will rebuff her because they cannot understand her and think she is “weird.” The vicious cycle of rejections can lead to further withdrawal and idiosyncrasy.

People with schizophrenia often display marked cognitive difficulties. They seem unable to maintain a coherent train of thought, but rather skip from one idea to the next, and this typically shows up in their speech. An example is a fragment of a letter written by one of Bleuler’s patients. The writing starts out normally enough, but then deteriorates:

I am writing on paper. The pen I am using is from a factory called “Perry & Co.” This factory is in England. I assume this. Behind the name of Perry Co., the city of London is inscribed; but not the city. The city of London is in England. I know this from my school-days. Then, I always liked geography. My last teacher in that subject was Professor August A. He was a man with black eyes. I also like black eyes. There are also blue and gray eyes and other sorts too. I have heard it said that snakes have green eyes. All people have eyes. There are some, too, who are blind. These blind people are led about by a boy.

It is also common for people with schizophrenia to have significant impairments start-ing with the earliest stages of sensory processing (Walker, Kestler, Bollini, & Hochman, 2004) and extending through episodic memory and cognitive control (Reichenberg & Harvey, 2007). Other perceptual and motor abnormalities are evident in people who have not been diagnosed with schizophrenia but who are at elevated risk for the disease; these abnormalities include deficits in two-point discrimination (distinguishing between 1 and 2 points touching the skin) and simple line drawing (Lenzenweger, 2006). These (and other) cognitive problems may all contribute to the broad pattern of symptoms that are typical of schizophrenia. An inability to inhibit thoughts and actions, for example, con-tributes to disrupted speech and behavior, while difficulties in executive function interfere with the ability to reason and so foster the delusions.